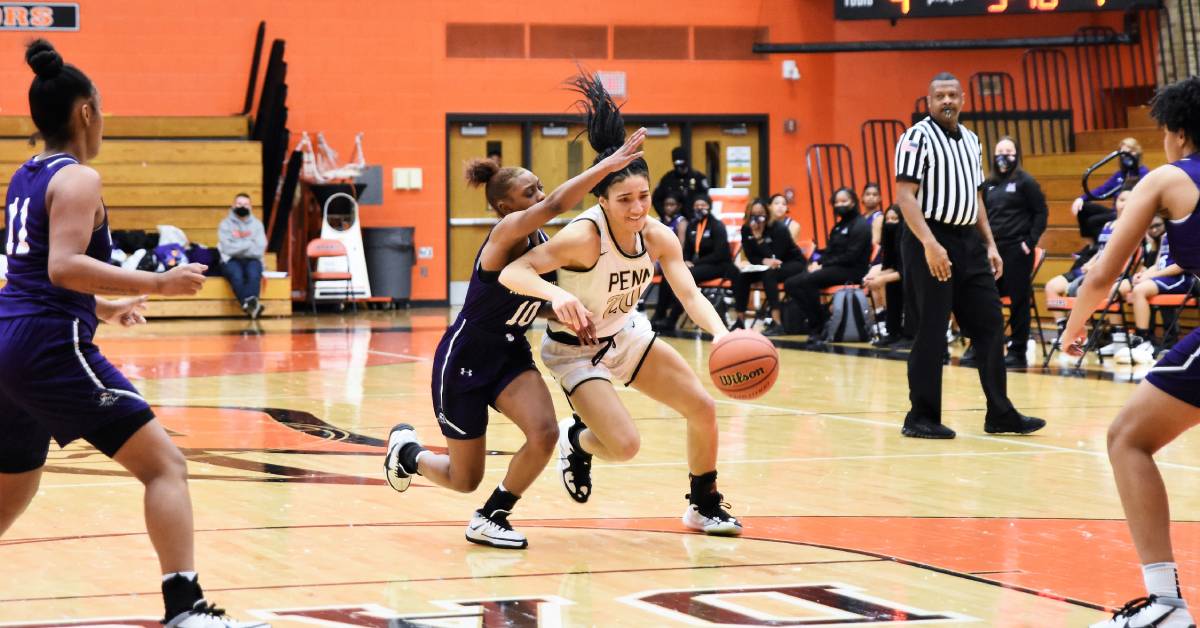 The road to the trophy is a long one, even under the best of circumstances. Hours of practice, game after game and all of it comes down to the postseason, where those who have proven themselves the best of the best face off. In the end, there can be only one, and today at La Porte High School, the field for girls varsity basketball just got narrower, with the elimination of Merrillville and La Porte from tonight’s championship game, with Penn High School taking on Crown Point High School for the trophy.

In the first game of today’s playoffs, Merrillville faced off against the Lady Kingsmen. Penn (21-3, 9-0) jumped out to an early lead against the Pirates, closing out the first quarter 23-7 over Merrillville. Penn’s strong defense held Merrillville at bay for the rest of the first half, only allowing a total of 9 points, while their offense racked up another 13 points to head into halftime with a solid 36-9 lead over the Pirates.

“I think we did a really great job following and executing the game plan. We did really well defensively, taking away Merrillville’s aggression, especially off the dribble, with quick and dynamic athletic guards. We just really moved the ball well against their half-court pressure,” said Kristi Ulrich, head coach for the Lady Kingsmen.

Penn continued to rack up the points while holding Merrillville to just a few field goals, finishing up the game 63-22 Penn. Standout players were #42 Trinity Clinton, 5’ 7” senior guard, who nailed a string of 2pt field goals in the first half to put a total of 19 points on the board for her team. Not far behind Clinton was #20 Kaitlyn Costner, another 5’ 7” senior guard, who connected with her own batch of 2pt and 3pt FGs to add 15 points to Penn’s victory.

In the second game, the La Porte Slicers (13-11, 4-3) took on the Crown Point Lady Bulldogs (22-1, 7-0). La Porte held home court advantage, and gave a strong performance, but it just wasn’t enough to overcome the powerhouse offense from the Lady Bulldogs.

Crown Point posted the first scores of the game, keeping the Slicers off the board until late in the 1st quarter when #10 Natalie Thiem, 5’ 11” senior G/F landed a 3pt field goal, and #22 Ryin Ott, 5’ 11” senior G/F landed a pair of free throws and a 2pt field goal of her own to finally get La Porte on the board, but it wasn’t enough to overcome the Bulldogs and they closed out the first quarter down 20-9 behind Crown Point. The Bulldogs rallied behind their powerhouse player, #14 Jessica Carrothers, 5’ 7” junior guard. Carrothers pounded the basket mercilessly, hitting three 3pt FGs, a whopping eight 2pt FGs and went 4 for 4 on free throws to stuff the board with 29 game points, pushing Crown Point to an easy 52-28 win over the Slicers.

Chris Seibert, head coach for Crown Point, maintained a very pragmatic approach to his team’s win as they looked forward to facing off against Penn in tonight’s championship game.

“The big thing now is just survive and advance,” said Seibert. “I’m really proud of the kids, the way they competed here today. I thought they did a real good job defensively and we’re just looking forward to playing again tonight.”

“Penn’s a great team. We’ve had several battles with them over the last few years. We know that we’re going to have to play really well in order to have a chance to win.”

Seibert predicted that tonight’s game would likely come down to the last few possessions to determine the final winner.

“It’ll be whoever makes those last plays,” Seibert said.