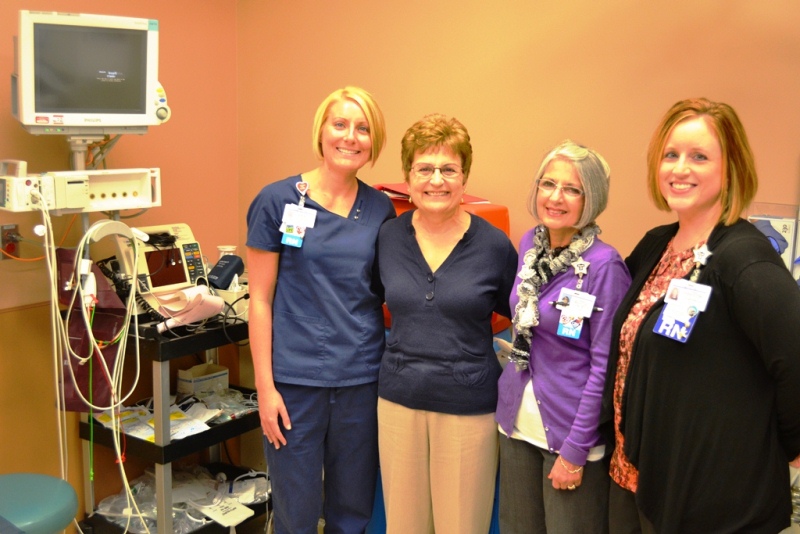 Anita Petrovic is living proof of how recognizing stroke symptoms and getting help quickly can lead to a fast recovery and resumption of normal life.

Her saga began on April 29, as she was completing a two-hour workout at the local YMCA, and ended successfully at Franciscan St. Anthony Health-Crown Point.

“I noticed at the end of exercise class that my feet weren’t doing all of what I wanted them to do. I went home and was having lunch about 40 minutes later when I noticed the left side of my lower lip felt funny. I looked in the mirror and also noticed one eye wasn’t open as the other. I thought I had Bells Palsy, a stroke or something else and my husband John said, ‘let’s go,’ to the emergency room.”

Petrovic, who lives near the hospital, said her experience with previous health issues, along with information she had garnered through Franciscan Alliance seminars and its Spirit of Women health education program, as well as a refrigerator magnet that listed stroke symptoms, led to her fast decision to seek help.

And she can’t say enough about the help the hospital provided.

“Not more than 20 minutes after I arrived, I was getting a CAT scan. Three nurses and a resident (physician) were right there, right away.”

She was diagnosed with a blockage in the brain “that totally shocked me – I had no idea,” and was offered the option of tissue plasminogen activator (t-PA), a “clot-buster” drug that is known to provide appropriately selected patients a better chance of recovery, with little or no disability, compared to patients who are not treated.

A short time later, just before the drug was administered, Petrovic had a more severe onset of symptoms.

“It felt like somebody grabbed my face and pulled it back – like my face was blowing up and I couldn’t holler for the nurse.”

But a nurse noticed her predicament and “then here comes this entourage of wonderful angels “to assist her, Petrovic said.

By then, she couldn’t talk or move her left arm.

After the drug was administered, which must be done within a three-hour window to be most effective, Petrovic began to improve rapidly.

“I started feeling it working right away and 45 minutes later, a nurse said he couldn’t believe I was the same person he had seen earlier. I could talk and was pretty much back to normal,” she said.

“The ER doc said he wished more people would get in as fast as I did,” Petrovic said.

She spent three days in the hospital – two of them in the intensive care unit, the other in coronary care. The day after discharge, she and her husband went shopping and she has been fine ever since.

During her hospital stay, Petrovic said the staff provided everything she needed to know about her condition and treatment. Now, she urges anyone who has symptoms to “please go in right away.”

“My symptoms weren’t bad at first, but I went in and when the big one happened an hour later, I was in the right place at the right time. I want to tell everyone not to procrastinate; to get help,” she said, again lauding the medical staff for its efforts.

“This isn’t just a job to them, it’s a ministry. These people want to be here. Although they have other patients, they make you feel like you are number one. They were wonderful and I am so glad they were here.”

“I’m so grateful Mrs. Petrovic shared her story. She offers a great lesson to share,” Kerstetter said, adding, “If you have stroke symptoms, get to emergency services fast – dial 911 and don’t minimize your symptoms. Anita did the right thing in getting to us quickly.”

F.A.S.T. Assessment
If someone is having stroke symptoms, Franciscan Alliance officials recommend performing the F.A.S.T. assessment:
Face – Ask the person to smile. Look for facial droop and uneven smile.
Arms – Ask the person to raise both arms. Can he/she do it evenly?
Speech – AS the person to say a simple sentence. Listen for slurred speech.
Time – Call 911 and get to the hospital immediately. Stroke treatment options only work within a certain time period.