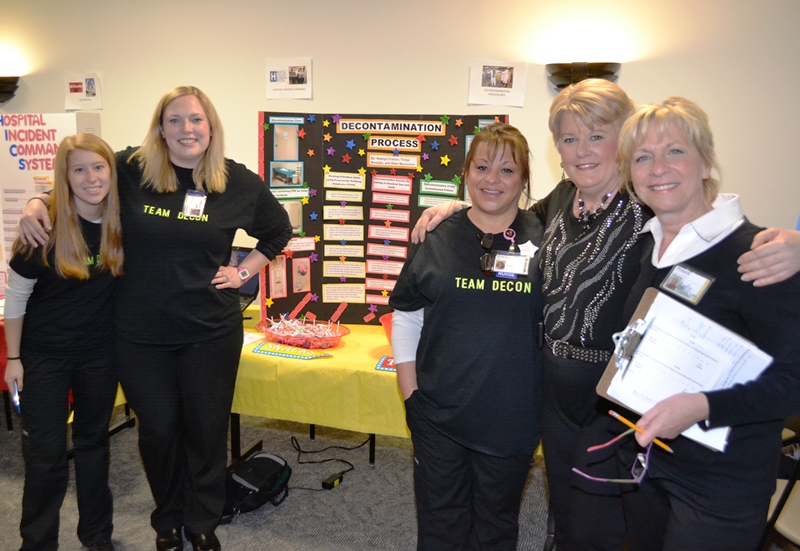 Franciscan St. Anthony Health-Michigan City Safety Committee members collaborated with Purdue University North Central nursing program officials to offer a Safety Fair, focusing on emergency preparedness and other safety measures, at the hospital March 24. The program came about after hospital and university officials met to discuss ideas, which resulted in 33 students in the Community Health nursing class choosing related topics and interactive activities, one of which included a fire extinguisher demonstration that allowed participants to battle a simulated blaze that appeared as a screen projection. Patient safety and infection control also were among topics.

Professor Peggy Rose, associate professor of nursing, said the effort was meant as an educator and refresher for hospital staff members and hopes it will become an annual offering. “We want to familiarize the hospital staff with the knowledge, skills and attitudes related to safety and disaster preparedness and do the same for the student-nurses,” she said. Elaine Criswell, hospital education manager, agreed. “All of the topics are meant to refresh and educate the staff – the nursing students are helping to teach them and expand and update their knowledge in vital areas.” Besides Criswell, also helping to facilitate the effort were safety committee members Greg Arndt, manager of safety and security; Sheree Tylicki, director of risk management and supervisor of service excellence; and Mandi Eggert, education department member; and Professor Diane Spoljoric. Shown, from left, are students Katelyn Franco, Nikki Meanovich and Tonya Mostello, all seniors; who offered information on decontamination procedures. With them are Criswell and Rose.