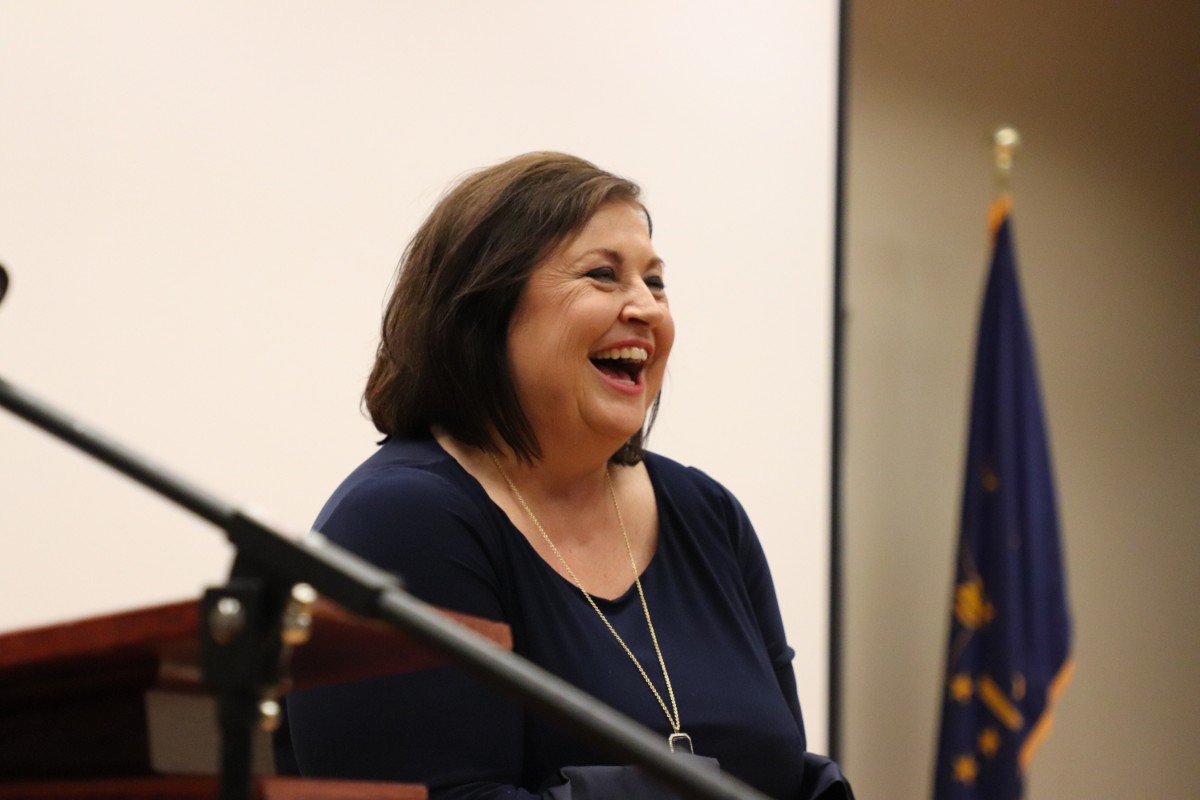 “We wanted to bring in someone who was not only fantastic in terms of giving back to the community, but was also an alumni of the institution,” said Jeri Pat Gabbert, who serves as the Vice Chancellor of University Advancement and External Affairs at IUN. “Violet was the first person we thought of, and after listening to her tonight, and witnessing her message to believe in yourself regardless of your identity, I think everyone in the audience can agree that we hit the jackpot.”

On a night made to celebrate Women’s History Month, Sistovaris shared with the audience her personal experience of climbing the corporate ladder over her 30-year career, detailing everything from her humble Greek roots to her rise up through the ranks at NIPSCO, and covering topics from gender differences, to customer interactions, to the overall importance of leadership throughout society. Amidst her seamless weaving from one topic to the next, Sistovaris managed to string together a specific theme throughout the night, one that encouraged a societal openness to acceptance and equality.

“We all need to have a beach ball perspective, because if I’m holding a beach ball in front of me just still, I’m going to see a few colors, maybe red and white and blue,” said Sistovaris. “But all of us need to understand that there’s more color to that beach ball; sometimes all you need to do is look up, or tilt your head, or spin the ball to see that.”

Sistovaris also touched on hot societal topics, such as the Me Too movement, which initially strove to raise awareness on sexual harassment in Hollywood, but has expanded to holding individuals accountable for inappropriate behavior in every workplace throughout the United States and the rest of the world.

“We all not just deserve, but have the right to come into a work environment where we are safe from inappropriate behavior of any kind,” said Sistovaris. “This social movement has really gotten all of us at the senior and administrative level to realize that it’s probably more prevalent than we think, and rather than ignoring it or sticking our heads in the sand, we’ve decided to talk about it very openly.”

“When we talk to folks who are in question regarding situations like that, nine out of ten times the response is ‘I didn’t mean it, that wasn’t my intention,’” said Sistovaris. “What I’m reminding my employees of all the time is, it doesn’t matter what you’re intention is. What matters is how it impacts me, the recipient.”

When prompted by a question from a member of the audience, Sistovaris gladly touched on perceived dilemmas regarding Millennials entering the workplace.

“We want the Millennials, because although they are different, I can’t point to a general gap in skill,” said Sistovaris, touching on how far more technologically and data savvy Millennials tend to be coming out of school, in comparison to older generations in the workforce.

“You know, we hear that stigma of Millennials want to climb to the top of the ladder in two or three years, but honestly that was me thirty years ago,” said Sistovaris. “The Millennials I work with make a difference in my decision making, and they impact how the senior team functions, so I don’t necessarily buy into the general negative stereotypes that come along with Millennials.”

After the speech, Sistovaris seemed to feel right at home at the university’s Savannah Center, making small talk amongst the audience members, and staying afterwards, just long enough so as not to miss her flight, so she could speak with students and faculty who had further questions and curiosities.

"I really appreciated what she said about how you can’t just hand over experience in a binder, like you can with a degree,” said Paige Smith, a junior in the dental hygiene program. “You have to work hard for something, it’s not just going to fall in your lap.”

Smith also connected with Sistovaris’ thoughts on women in the workplace, and enjoyed listening to Sistovaris share her personal experience of seeing women taking spots in the corner of the office or being inconspicuous at meetings, while men at the same level would physically and vocally spread themselves out make sure to make their presence known.

“She learned from that, and decided that she was going to be louder and start to introduce herself with assertion,” said Smith.

“Yeah, you want to stand out in the crowd,” agreed Lauren Rarity, a friend of Smith who is also a junior in the dental hygiene program. “When she mentioned just being a face in the corner, as a woman, I can relate to that because I do that too, but people want to see confidence. So that was inspiring to hear.”