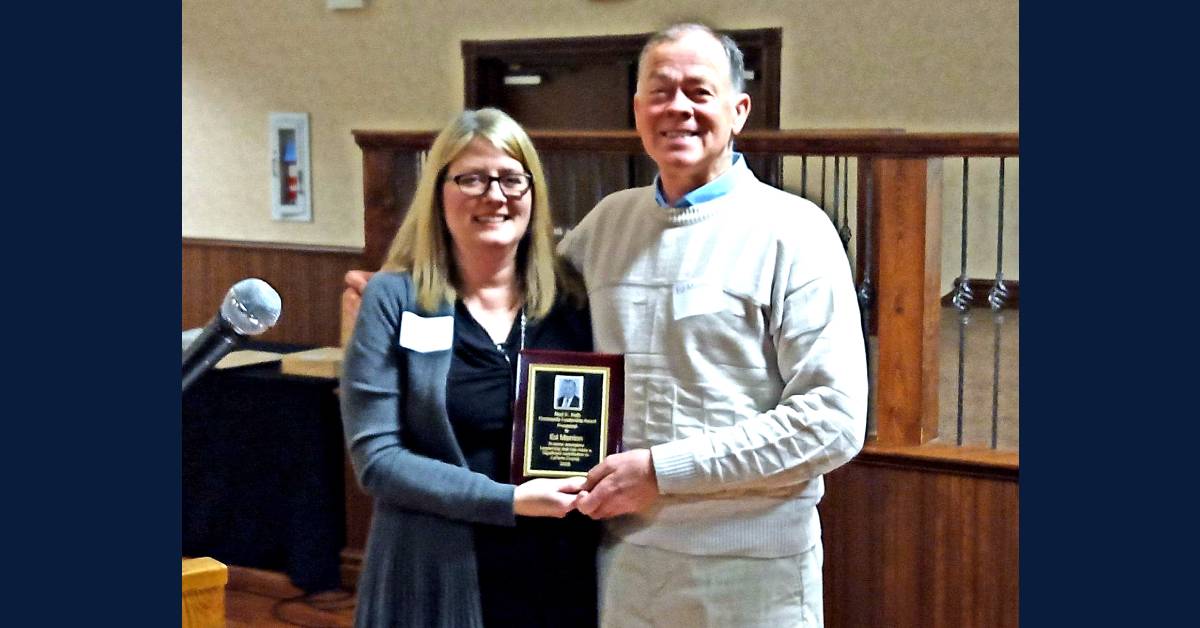 Ed Merrion was selected as the recipient of the 9th annual Ned E. Kalb Community Leadership Award, presented at the recent Purdue Extension La Porte County Annual Meeting held at the Silver Palace in La Porte. Ed was recognized for his longtime service to the homeless and vulnerable in La Porte County.   He was presented a plaque and will have his name added to the permanent plaque on display at the Extension Office.  The permanent plaque was donated by Dick Reel, who served as the Extension Director for many years. The award is named for former extension director Ned Kalb, who had a tremendous impact on La Porte County

Ed was nominated for the award by Jim Musial, Executive Director of Citizens Concerned for the Homeless Inc., (CCH) and Harrison Holtkamp, Executive Director of Interfaith Community PADS, Inc.  The nominators stated “Ed is a selfless and tireless advocate for the homeless and for our community generally.  His humble leadership style is complemented by his dogged determination and ability to get things done.  Everything Ed does contributes to the well-being of the community in a quiet, behind-the-scenes fashion. He does not seek recognition or the spotlight and his silent compassion inspires others to get more involved in the community.”

Ed is the former director of Catholic Charities and facilitated the “Self Sufficiency” workshops to teach homeless and at-risk homeless citizens the basics of banking, budgeting, local resources and Landlord Tenants rights and relationships.   He has been instrumental in developing the Interfaith Emergency Men’s Overnight Shelter, Keys to Hope Community Resource Center, and most recently, the CCH Food Rescue Initiative. The Food Rescue Initiative brings together Feeding America, Food Bank of Northern Indiana, CCH, 5 major local food retailers, Michigan City soup kitchens and food pantries as a major tool against food insecurity. He is also working to make the former Sacred Heart Church in Michigan City into a permanent homeless shelter.

“Ed is very deserving of this honor, and we are proud to recognize community achievement that honors the legacy and spirit of Ned Kalb,” stated Leadership La Porte County Executive Director, Monica Komasinski.  Ned Kalb served as Extension Director for many years and was a catalyst for the formation of Leadership La Porte County.  He died in November 2011, and the award was created soon after to honor his memory. “Ned served La Porte County in so many ways.  He saw needs and brought people and resources together to solve the challenges, not only locally, but across Indiana and the world,” said Mary Foell, Extension Educator, Community Development.   Previous award winners include: June Lenig (2019), Elaine Shurte (2018), Herb Higgin (2017), Cynthia Hedge (2016), Diana Werner (2015), George & Dory Morley (2014), Dr. James Dworkin (2013), and John Coulter (2012).

Nominations for the next award will be taken beginning in January 2021.  For more information contact either the Extension Office or Leadership La Porte County.