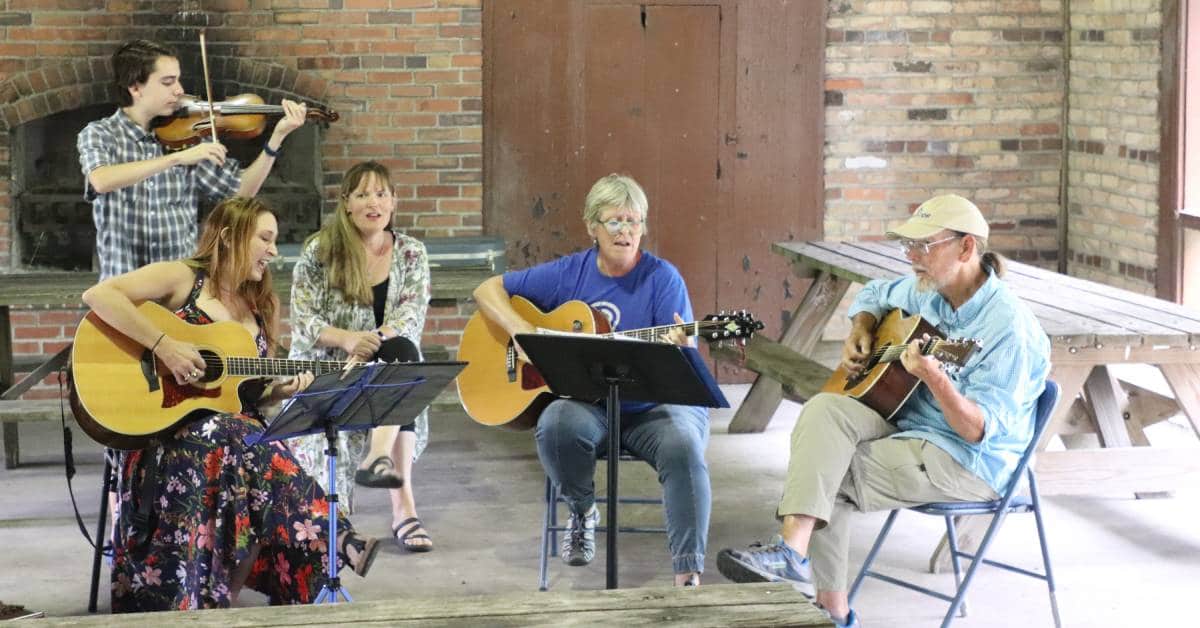 Thursday evening marked week two of the Northwest Indiana Excellence in Theater Foundation’s (NIETF) Park Plays Summer event series, as community members gathered at the Indiana Dunes State Park for a live performance by Cory Goodrich. Goodrich, an actress and musician based out of Chicago, is full of spontaneous facets.

Goodrich is a Jeff Award-winning actress for her roles as Mother in Drury Lane Oakbrook’s acclaimed production of Ragtime, and as June Carter Cash in the Jeff nominated Johnny Cash revue Ring of Fire, though Thursday shone a light on her musical talents.

“I’m a trained opera singer, but I started singing country music when I played the role of June,” Goodrich said. “Usually I’m on stage acting, so I don’t get to play my own music very often for live audiences. It’s always a treat when I get that opportunity.”

Goodrich has been making music for the past 7 years and has created several albums. Thursday’s performance featured original folk songs from Cory’s astounding album Wildwood Flower. Her musical inspiration derives from her own experiences and family, and her passion for song is apparent in the way she plays.

“It’s so much better to play for a live audience,” Goodrich. “When I play in my home it’s really just me, but when playing live I feel so much joy to see the crowd’s reaction.”

Some of the audience began to cry when hearing Take Me Home, Country Roads played by Cory and the rest of her team. As the music faded, one audience member shared his connection to the song and spoke about his Captain that he had in the Armed Forces saying, “My Captain was from Virginia, and he was someone that meant a lot to me. He recently passed away, so this song really touches my heart.”

After strumming several songs on her acoustic guitar, Goodrich brought out her exquisite autoharp. The harp was skillfully crafted by George Orthey, who also made the autoharp of June Carter Cash, the very person Goodrich embodied on stage.

“The way I got this harp is actually a funny story,” Goodrich said. “When I did the Johnny Cash show they told me I was going to play autoharp, and gave me one to use. I wanted to learn how to play it well, so I started looking for teachers and lessons available.”

In her search for instruction, Goodrich came across a grant in Autoharp Quarterly magazine that would award the winner $5,000 to create an autoharp album. Goodrich seized this opportunity for practice, but was shocked when she actually won the grant.

“I didn’t even have an autoharp, all I had was the one they gave me from the show,” Goodrich said. “I knew I had to get myself an autoharp then, and I came across George Orthey online. I ended up driving out to his workshop in Pennsylvania, and he gave me “Big Red”, an autoharp he was making, and the one I play today.”

Goodrich’s performance was the second of four events that comprise the NIETF Park Plays Summer entertainment series. Catch the upcoming performances of “Disney’s Moana Jr.” presented by the Seedlings Theatre Company of Hobart on August 6 and 13. Each show will begin at 6:30 p.m. at the Indiana Dunes State Park. All shows are free, but there is a small fee for general park entry.