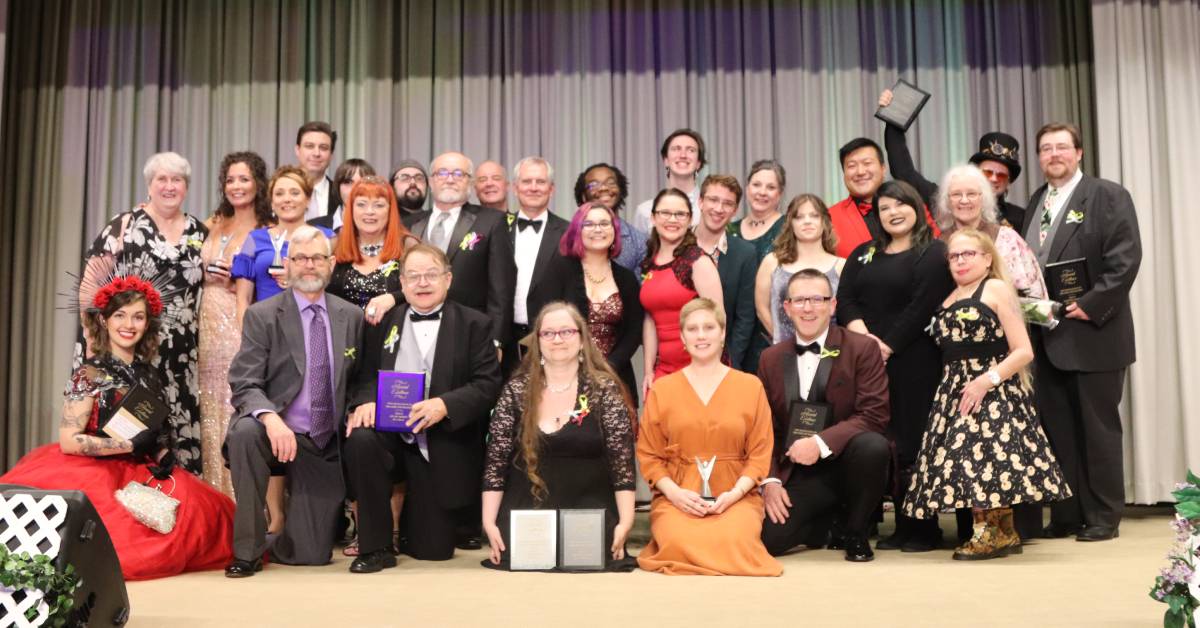 Glamour, glitz, theatrics, but most importantly, community. The 27th annual Northwest Indiana Excellence in Theatre Foundation (NIETF) Gala was a special night for the theater community to celebrate the hard work accomplished throughout the 2018-2019 season.

“This event is important to allow like-minded people to get together and celebrate our collaborative art,” said Jared Liddle, emcee for the 15th year.

Described as the Tony’s for Northwest Indiana, Saturday’s “An Evening in the Woods” Gala found attendees transported to a secret garden in the woods right in the beautiful Hellenic Cultural Center in Merrillville. Community members reconnected with old and new friends alike.

“I like coming to the gala to see all of the different people within the theater community and it’s a chance to socialize and spend some time together. It’s always nice to be recognized for doing a good job, but we’re all doing community theater because we love to do it. And NIETF brings us all together,” said Phil Myers, attendee.

A cocktail hour allowed members to mingle and speculate over who would take home awards.

“No one knows who’s won. An outside accounting firm tabulates the votes and they are the only ones who know the names in the envelopes,” said Angela Heid, Vice President of NIETF and Technical Director for the gala.

After a sumptuous dinner was the main event: the awards ceremony. All areas of the theater community were honored with awards from Best Sound to Best Actor, and each award was heartily applauded.

Many of the acceptance speeches emphasized the importance of the NIETF community.

“It’s a sense of community and feeling accepted in a group of people who are so diverse. We get to do what we love and people understand why you do it,” said Sandy Stotts, attendee, and past winner.

Beyond individual awards, each year NIETF recognizes volunteers nominated by each theater, bestows the Presidential Award for Excellence, and provides a money prize to a local theater to use for upcoming projects with their Project CAST. This year’s winner, Genesius Guild, was extremely thankful for the award money that will go toward new sound equipment.

“We get to award scholarships and nurture that new, fresh, exciting passion for theater,” Liddle said. “We honor our volunteers, people who tirelessly donate their time, treasure, and talent, and those people aren’t always in the spotlight. And we get to honor someone who has served in our community and established a legacy with the President’s Award of Excellence. We’ve got the new, the heart, and the legacy.

“Most areas are lucky if they have one. The theater is great! People don’t always get to see big Broadway-type shows so it’s great that they get to come out and see community theater,” said Rob Hunt, board member, and gala chair.

A great big round of applause to all the winners tonight and thank you to NIETF for continuing to support and encourage Northwest Indiana’s theater community.

This year's winners are:

Featured Actress in a Musical: Tie

Featured Actor in a Musical: Chong Choe as Miles; A Funny Thing Happened on the Way to the Forum, Genesius Guild

Principal Actor in a Play: Donald Beck as Joe Keller; All My Sons, 4th Street Theater

Featured Actress in a Play: Tie

Cameo in a Play: Chong Choe as Banjo; The Man Who Came to Dinner, Genesius Guild

Volunteers of the Year