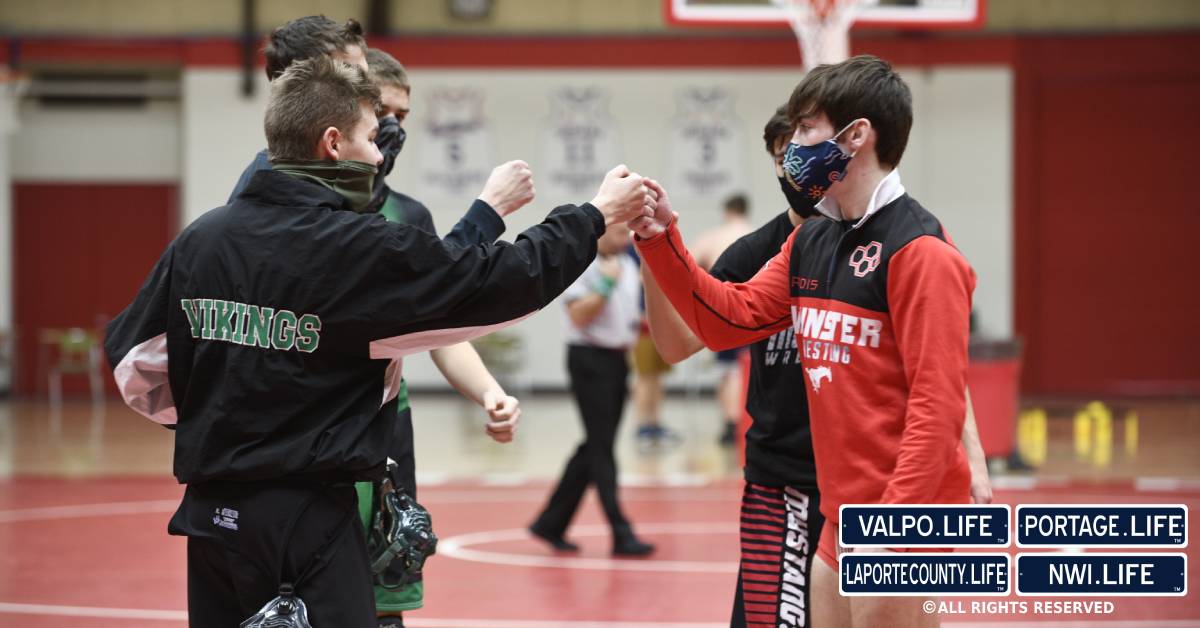 Munster High School hosted their annual Super Duals wrestling tournament and all participating couldn’t have been more excited. The event has been held for over a decade, with Munster Athletic Director and head wrestling coach Zach Slosser even wrestling in the tournament himself as a student.

“It was great to have a competition. We are all excited as coaches when we can compete on Saturdays and still be safe about it. The kids are happy about it for sure,” said coach Slosser.

“It’s nice to come get some wins,” said Coach Whitenack. “Any week we can participate in wrestling is a great week.”

After disinfecting mats, it was on to round two where La Porte wrestled Illiana Christian, Munster wrestled New Prairie, and Hammond wrestled Griffith.

Round two saw La Porte victorious with 71-12 over Illiana Christian. New Prairie had 54 points to Munster’s 19, and Griffith won 27 points against Hammond’s 18.

The fifth and final round had Munster winning against Hammond 66-6 points. New Prairie remained undefeated overall with a score of 74 points over Illiana’s six points. La Porte scored 74 points while Griffith had zero points.

Overall it was New Prairie who won first place at the tournament. La Porte finished in second place and Munster took third.

New Prairie was happy with their win, and Coach Whitenack was quick to point out that it was not the work of one person.

“As a team we went 5-0 for the day and that’s what we are always looking for,” said Coach Whitenack.

Check out all the photos from the tournament in our gallery below!