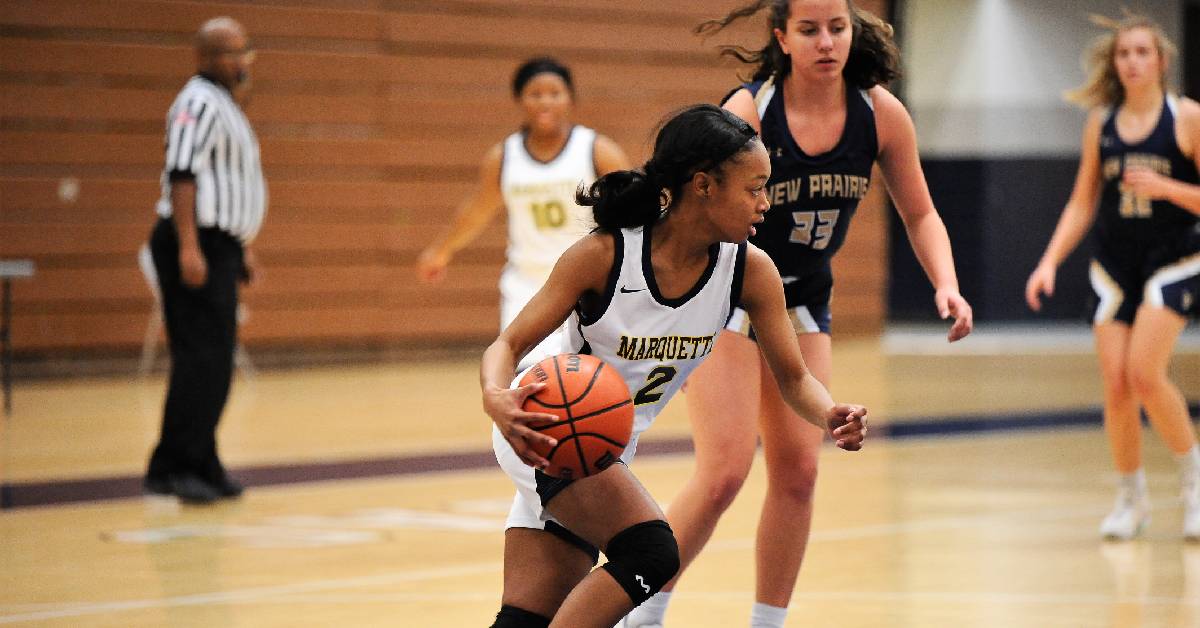 The Cougars jumped out to an early lead in the first quarter, thanks largely to the outstanding performance of #32, Jordan Wynters. The 5’9” senior guard, forward and team captain put in an impressive string of 3-pointers to help push their team to an early 20-16 lead.

But the Blazers weren’t going to make it easy for their rivals, thanks to #10 Ruth Bean, the 5’3” sophomore guard fought hard, adding 9 points to the board. Marquette managed to garner 15 points in the second quarter, enough to squeak past New Prairie 31-30 at halftime.

New Prairie came out of the half rested and ready, with a strong showing from #4, Eva Skye-Dodds. The 5”8” sophomore guard landed a string of 2-pointers, helping her team retake the lead 43-40 at the end of the 3rd quarter, a deficit that would prove too much for the Blazers to overcome, with New Prairie taking the win, 65-53 final score.

In the next game, the Michigan City Wolves girls basketball team won the tip off at the but it was Lake Station Edison’s Kayla Wilkerson who scored the first basket, sinking a three pointer at the start of the game.

The entire first quarter was a nail biter with both teams within one point of each other. It looked like the Wolves would finish the quarter ahead when, with just a few seconds left, Wilkerson sunk a two point basket putting Lake Station ahead 18 points to Michigan City’s 17 points.

Lake Station will battle New Prairie in the Championship game while Marquette will take on Michigan City for third place.