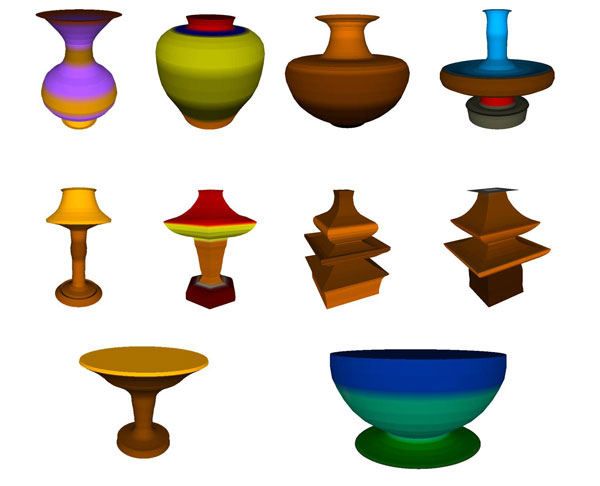 Researchers have developed a design tool that enables people to create three-dimensional objects with their bare hands by using a depth-sensing camera and advanced software algorithms to interpret hand movements and gestures.

"It allows people to express their ideas rapidly and quickly using hand motions alone," said Karthik Ramani, Purdue University's Donald W. Feddersen Professor of Mechanical Engineering. "We're democratizing the design process. You don't have to be an engineer or an accomplished potter to use this. You can be a kid."

The tool, called Handy-Potter, represents a potentially significant advance in how people interact with computers, he said.

"In our lab we have a saying, 'The mouse is dead,'" Ramani said. "With Handy-Potter, we are trying to make the computer interface natural to the user."

His research team won an "all conference best paper" award for the Handy-Potter work, to be presented during the ASME 2012 International Design Engineering Technical Conferences and Computers and Information in Engineering Conference this week in Chicago. The paper was co-authored by Ramani and graduate students Vinayak, Sundar Murugappan and Cecil Piya.

The research, funded by the National Science Foundation, addresses the limitations of conventional computer-aided design tools that are needed to create geometric shapes.

"Traditional tools require the use of procedures so complicated that it is difficult to become an expert," Ramani said. "Handy-Potter is more of an imagination tool. You create the shape while you are completely focused on the idea rather than bothering yourself about the right usage of the tool. The tool learns you and does not become a barrier in creation. You don't learn the tool."

"For example, there are very intuitive gestures for pulling and bending a shape," Ramani said. "You learn the gestures naturally and without any user manual."

The tool could have applications in areas including games, architecture, art and engineering design. It uses the Microsoft Kinect camera, which senses three-dimensional space. The camera is found in consumer electronics games that can track a person's body without using handheld electronics.

Researchers created advanced algorithms that recognize the hand, understand that the hand is interacting with the shape and then modify the shape in response to the hand interaction. (A video showing how the system works is available at https://engineering.purdue.edu/cdesign/wp/?p=1221)

A patent is pending on the concept.