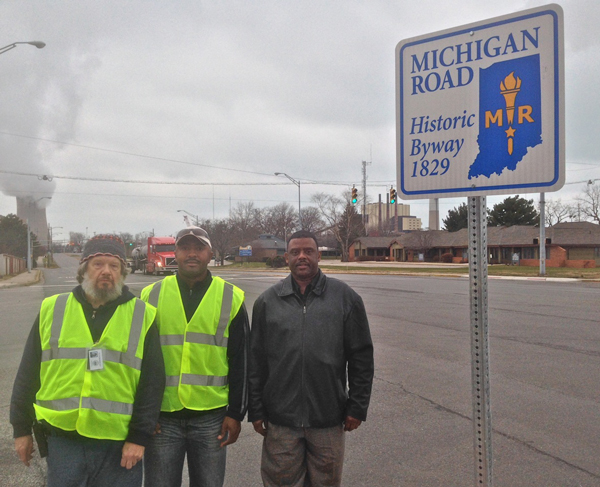 The Michigan City Street Department stepped up to help a project three years in the making when a crew installed the brand new Michigan Road Historic Byway Signs along Michigan Boulevard. Street Department Director David Farmer and his crew, made up of Shong Smith and Ken Knoll, installed the signs along Michigan Boulevard at Rt. 20 and Rt 12 which will direct travelers coming from downstate to Lake Michigan and to the Uptown Arts District which is the final destination of the road that spans 14 counties.

Councilman Richard Murphy serves on the Michigan Road Byway Board of Directors which sought approval for the designation in Indianapolis nearly three years ago. Murphy worked with the Michigan City Redevelopment Commission, Jack Arnett from the LaPorte County Convention and Visitors Bureau, and Senator Jim Arnold's office to achieve the byway designation and fund the new signs.

The designation presents what officials believe to be an important economic opportunity for Michigan City as Michigan City is the end destination for the Michigan Road HIstoric Byway that connects Michigan City with 14 other counties of the state of Indiana. Murphy said on Thursday, "Historically, the road was an important trade route and was used by the pioneer, a path for freedom by the runaway slave and was the trail down which the Native American was removed from their lands. Today, it's an important historic road that can help market Michigan City's assets to the rest of Indiana."

Officials believe the Historic Michigan Road Byway will tap into the growing heritage tourism industry, which will prove a valuable development tool for local communities’ economies. The road has became the first state byway in Northern Indiana and the first to traverse the state in a north/south direction, tying the state together for tourism initiatives. The historic byway includes all of the current Michigan Boulevard in Michigan City. This designation is especially important in light of the nearly $20 million dollars in recent streetscape improvements to beautify Michigan Boulevard, the eastern gateway of Michigan City. The designation will be noted on official state maps.