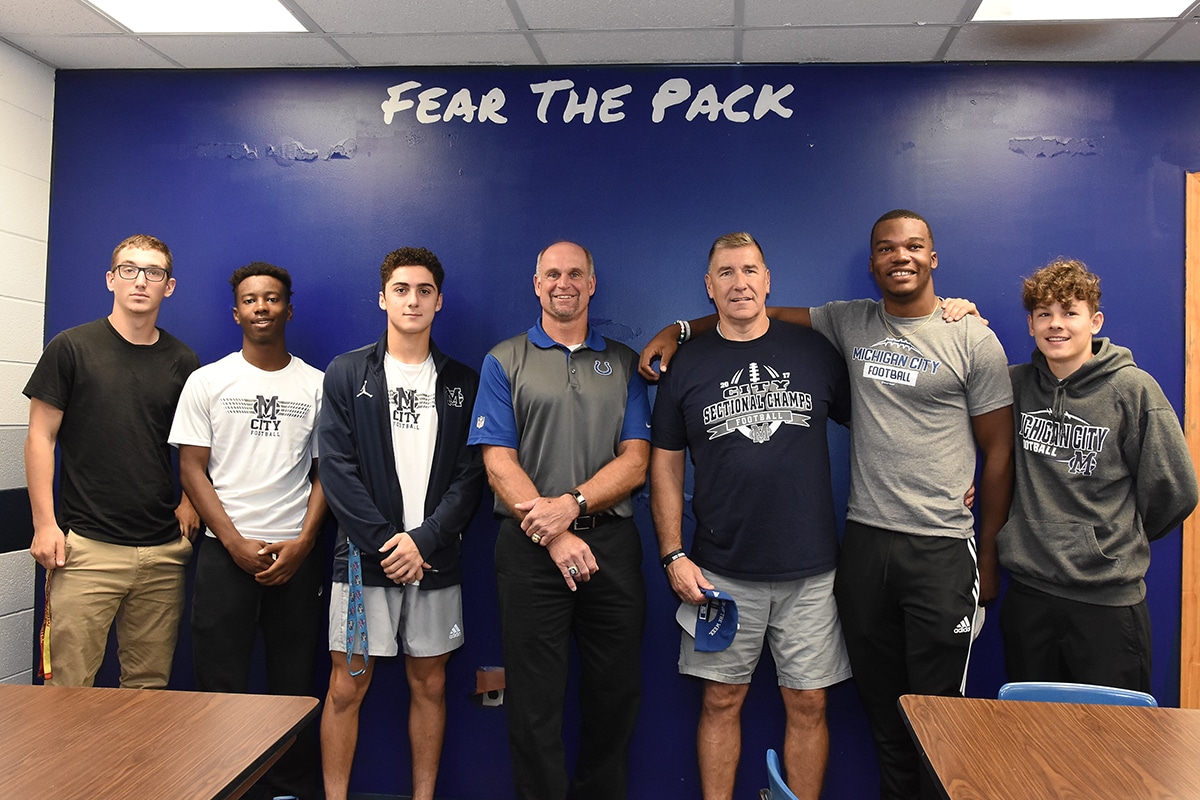 For Phil Mason, Head Coach of the Michigan City Wolves football team, most mornings are filled with hours of reviewing past games and planning for the next Friday night matchup, but Wednesday morning was a little different. Wednesday morning, Mason was happy to be honored as Coach of the Week by none other than the Indianapolis Colts, receiving a framed certificate signed by NFL Commissioner Roger Goodell, Colts General Manager Chris Ballard, Head Coach Frank Reich, and Youth Football Commissioner Mike Prior. Mason was also awarded a $2,000 check to benefit the Michigan City Wolves football program.

“I’m humbled,” Coach Mason said at the presentation. “If I could, I’d put all their names on this certificate, from our staff to the administration and our kids. This is a definite team effort.”

Mason continued, “This means a great deal for all the work that we’ve put in. We had a major culture change, and the kids here put in a lot of work, both on and off the field. It’s just a lot of fun being here, coaching these kids and seeing how this community supports us.”

“That’s what we really see, coming out here every Friday night, we turn around and see 4,500 people in the stands. That’s just fantastic,” Mason said.

The Coach of the Week Program, currently in its 19th year, recognizes outstanding Indiana high school football coaches. In addition to a certificate and $2,000 grant, winning coaches will be recognized at a Colts practice visit and an on-field ceremony at an Indianapolis Colts home game. The award is made possible through a $1,000 contribution from both the NFL Foundation and Anthem Blue Cross and Blue Shield.

On hand to present the award was Mike Prior, Youth Football Commissioner for the Indianapolis Colts.

“He’s changed the culture here,” Prior said of coach Mason. “He’s transforming these kids on and off the field, not just to be better football players, but to be better students and citizens. It’s not all about football, it’s not all about winning games. It’s about taking care of the kids. So this is an extra benefit that the Colts and the NFL like to put forth to recognize and reward these coaches.

“We made the right choice here,” Prior said.

Coach Mason was named as head coach in 2016, and is credited with turning around the Wolves football team, who are currently 6-2 for the season, having won their last 4 consecutive games.

“There’s more to this award,” Prior said. “The Colts believe that these high school coaches don’t receive enough recognition for all the hard work and dedication that they put forth for their student athletes, not only on the field, but off the field. We [cannot] see that go unrewarded.”

Craig Shaman, Athletic Director for MCHS, was on hand to congratulate Mason.

“Coach is a great guy. Accolades that either he or our players receive are really just residual results of the great program that he runs. That’s all there is to it,” Shaman said. “We’re just here, doing the right thing, day in and day out.”

For more information about the Colts Coach of the Week Program, contact Andy Matis of Colts Youth Football at (317) 808-5322, or visit Colts.com/HighSchoolFootball.