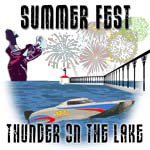 The event starts at 5pm with a cash bar, and dinner will be served at 6pm. Entertainment from the classic rock and country group Point 'N Fingers goes from 7­11pm. This year, SummerFest has agreed to donate a portion of the proceeds to benefit a collective effort by area veteran's organizations to correct a memorial in his honor located in Washington Park in front of the U.S. Coast Guard station. The memorial incorrectly included the emblem of the U.S. Army, while Daniel was instead a Marine. The cost of the correction is steep and runs in the thousands. As an organization which takes pride in giving back to the community, SummerFest is honored to be part of the endeavor.

Admission is $20.00 per person, or tables of 8 are $150. Tickets are available from any SummerFest Board member, by calling the event Chairman, Bill Greene at 219­898­0551 or you may pick them up from the LaPorte County Convention & Visitor's Bureau 4073 S Franklin St Michigan City, IN 46360. You may also email us at info@mcsummerfest.org.

Thank you on behalf of the Michigan City Summer Festival Committee, and we look forward to seeing you at the event.