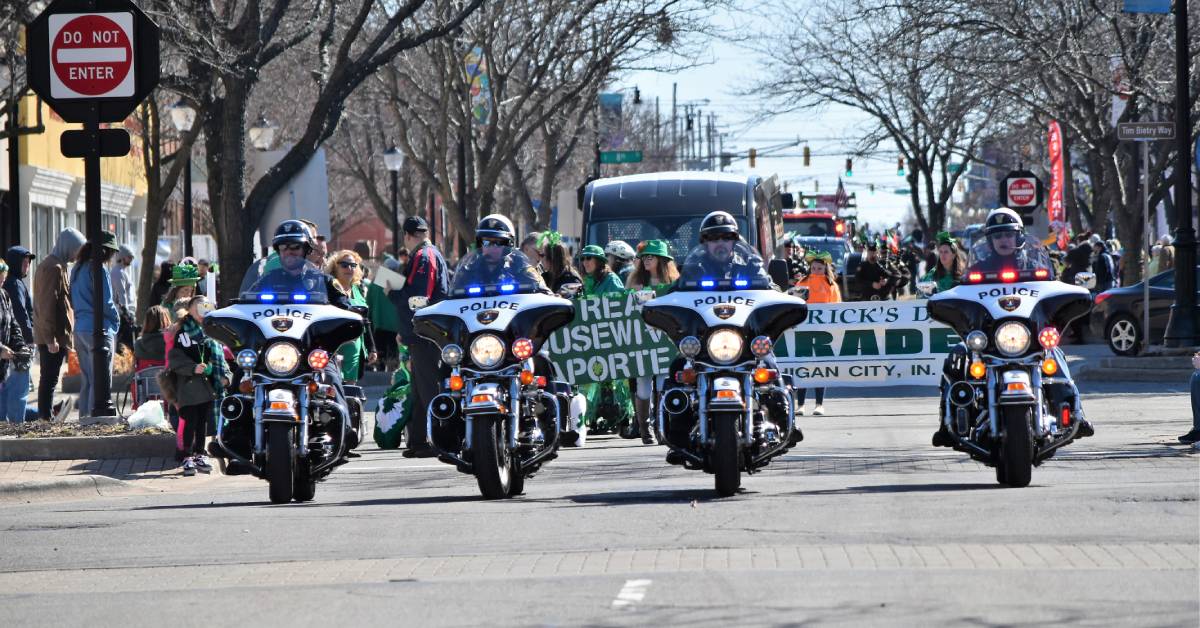 It was an event filled with smiles, great food, a parade and good times at Michigan City’s annual St. Patrick’s Day Parade. The city’s downtown area was filled with people eager to celebrate the holiday.

Among the many parade attendees were the Westfall family. Sasha Westfall says this is her family’s first year attending the event, and in anticipation of it, her boys insisted on arriving early to find the perfect spot to catch candy during the parade as it made its way through downtown Michigan City.

“We arrived here an hour early because we were so excited for today,” Westfall said. “I like to see the different floats.”

Darlene “Hurley” Brooks and Audrey Brooks came out to see the pipers do what they do best – play the bagpipes.

Jackie Frankowski dressed for the occasion from head to toe. She says was determined to not be outdone by her friend Gary Roadarmel, who sported his own St. Patrick's Day attire with the addition of a green goatee. While Frankowski was there for candy and Roadarmel was there for the green beer, it’s the camaraderie they enjoy most.

The organizer of the event and Michigan City Councilmen at Large, Johnny Stimley, has been an active participant for more than 20 years. He says he looks forward to the event every year and had three trophies ready to hand out.

“This year, we're giving out awards for "Best Use of Green," "Most Authentic," and "Funniest,” said Stimely.

This parade did not disappoint. In addition to music, dancing marchers, and flying candy, it also featured local organizations, businesses, candidates, three bagpipe groups, motorcycles, and even a few clowns.

"Haw Haw" James Kuhn and "TINYbiggs" Brent Biggerstaff of Michiana Clowns also participated in the parade, bringing smiles to those lining the route. Even as the parade ended, the pair were still making attendees laugh.

“We love the parade so much that we don't want to leave,” Haw Haw said. “I love seeing the children's faces light up,” he said.

Positivity and excitement radiated at the parade and Maxwell Smith, a sales consultant with Indiana Beverage, was no exception.

“We are here to spread positivity and St. Patrick's Day cheer,” said Smith. “Indiana Beverage has a relationship with the bars and restaurants of Michigan City. You will see some happy people later tonight, that’s for sure.”

As the parade ended, children collected their candy and gave one last hug to the clowns and mascots in attendance before running off with laughter.