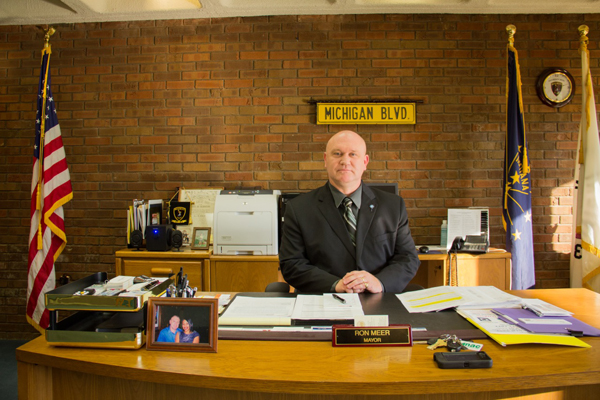 Michigan City Mayor Ron Meer knows how important Lake Michigan is to his community. The Mayor believes Michigan City is poised to be a gateway city, and protecting her waterways has been a major priority of his administration. Mayor Meer said, “Through extensive partnerships, collaborations and strategic planning initiatives, my administration has demonstrated a willingness to disclose and correct environmental problems. My team champions a culture that promotes safety and compliance by exploring various ways to achieve environmental results and making them a routine part of their everyday work.”

On September 19, 2014 the Michigan City Sanitary District (District) completed the last remaining task of their Compliance Plan mandated by the Indiana Department of Environmental Management (IDEM). The next step for the District will be to demonstrate six (6) consecutive months of full compliance with their National Pollutant Elimination System (NPDES) Permit and any special provisions of the Agreed Order.

This compliance demonstration began on October 1, 2014, and will run through March 31, 2015. If the District can demonstrate full compliance, it is likely that IDEM will close out the Agreed Order.

The Compliance Plan was developed and sent to the state for approval on April 30, 2012. By that time, the District was already on its way to implementing several of the items contained in the plan. Initially the Compliance Plan contained 89 items, but in July 2013, General Manager, Michael Kuss added ten (10) new items to the Compliance Plan. “These items were necessary to meet the ultimate goal of environmental protection and quality service to the citizens of Michigan City,” Kuss said.

Kuss is still working on the total cost of the 99 item Compliance Plan Implementation, but it will be in the neighborhood $13,000,000.

Two of the most important aspects of the Compliance Plan were the acquisitions of new equipment and vehicles and improvements to the Information Technology (IT) infrastructure. In early 2012, Kuss and the Sanitary District were faced with the reality of nonfunctioning Sewer Cleaning Machines, nonfunctioning Sewer Video Taping Equipment, numerous other vehicles and equipment beyond the state of repair, and an IT infrastructure that was on the verge of catastrophic collapse. The District spent approximately $2,100,000 on vehicles and equipment and $311,000 upgrading its IT infrastructure.

Some of the most notable projects and improvements completed during this almost 3 year compliance plan mandate included:

“We are striving to improve Michigan City as quickly as possible to provide our citizens and visitors with a high quality of life now - not later, but now. The only way to do that is to aggressively fix and correct problems and implement improvements as quickly as possible,” Mayor Meer stated. “The District under Kuss’ leadership exemplifies that it can be done!”

Additionally, Mayor Meer is quick to point out that Kuss did not stop with the Compliance Plan. He volunteered the District to become active member of the Northwest Indiana Partners for Clean Air and has helped to reduce air pollution by spearheading a plan to design and construct a Compressed Natural Gas (CNG) Refueling Station and use $300,000 of Federal grant money to help purchase a CNG Sewer Cleaning Machine – the first in the State of Indiana. He has implemented significant major corrective actions at Karwick Nature Park, he has secured grant money to evaluate stormwater controls for the Cheney Run Storm Sewer, he has implemented a Municipal Separate Stormwater Sewer System (MS4) Control Plan for Michigan City that is receiving high marks from State Regulators, and he organized the Conference on the Environment that was held at Blue Chip Casino and Spa on June 5, 2014.

This conference was attended by over 150 people and showcased many of the exciting improvements implemented and planned for Michigan City including the Lake Michigan Gateway Implementation Plan.

Furthermore, Kuss has implemented many other significant changes at the District that will improve efficiency and save money. For instance in 2012 he began personally coordinating the District’s bio-solids disposal instead of using a contractor. This one change alone has saved the District over a quarter of a million dollars to date. The fiscal responsibility does not stop there. He has been able to complete all of these improvements and increase the cash balances in the District’s Operating Fund and Improvement Fund, from dangerously low levels that frighten municipal rate consultants, to normal levels that will not only sustain compliance but provide for the opportunity to replace equipment as needed after it has reached its useful life.

Mayor Meer stated, “This is been a difficult process for the District in many ways, but it's also impressive how quickly the turnaround was achieved. Everyone at the Sanitary District deserves a pat on the back. Board President, Michael Gonder, City Engineer Charles Peller, current Board Members Frank Harris, Gary Mitchell and Holt Edinger, along with former Board Members Keith Harris and Phil Jankowski must be commended for their commitment to success. District Attorney, James B. Meyer certainly deserves special recognition for his involvement in the process as well.” “This was a total team effort.”