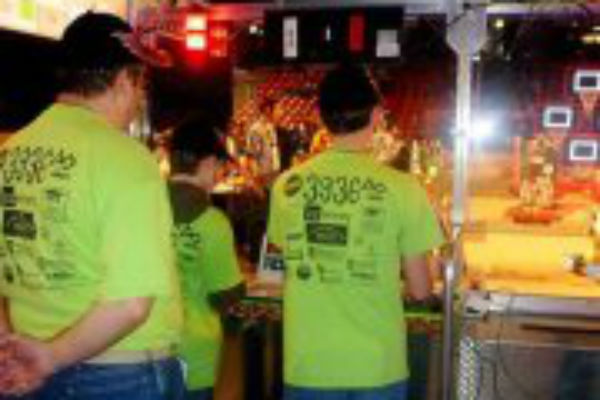 Nolin Bruns, freshman at Westville High School is making a quick repair in between competitions. As part of their successful rookie season, Michigan City Robotics Team 3936 achieved another major milestone on their journey to achieving long term sustainability as a quality robotics team by earning a spot in the FIRST (for Inspiration and Recognition of Science and Technology) Robotics World Championship competition to be held in St. Louis in late April.

Team 3936 earned their ticket to the World Championships by successfully competing in the FIRST Robotics Midwest Regional Competition held at the University of Illinois at Chicago this past weekend. Michigan City competed against 48 other FIRST Robotics teams from Arkansas, Kansas, Iowa, Illinois, Indiana and Ohio. 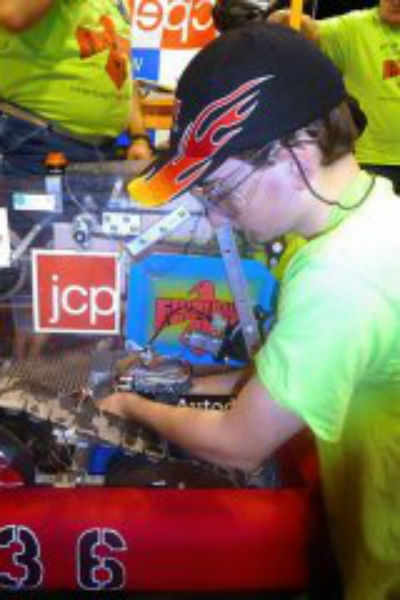 After the two days of competition in Chicago, Michigan City Team 3936 earned a record of 7 wins and 4 losses, placing 15th out of the 49 teams and finishing as the 2nd highest ranked rookie teams at the Midwest Regional.

Nolin Bruns, freshman at Westville High School is testing the robot before one of the competitions at the FIRST Regional Tournament.

As a rookie robotics team, Michigan City was eligible for the “All-Star Rookie Team Award”. The award is based on factors such as cooperation, community support, volunteerism, website design, industrial design, innovation and a diverse mix of mentors. After the judges panel examined the accomplishments of the 14 rookie teams in attendance and interviewed the student team members, the judges rated Michigan City Team 3936 as the winner of the Midwest Region All-Star Rookie Team Award.

By earning the All-Star Rookie Tam Award, Team 3936 automatically qualifies for the World Championships in St. Loius and team Coach Herb Higgin already began raising funds for the trip on the bus ride home from the Midwest Regional Saturday night. 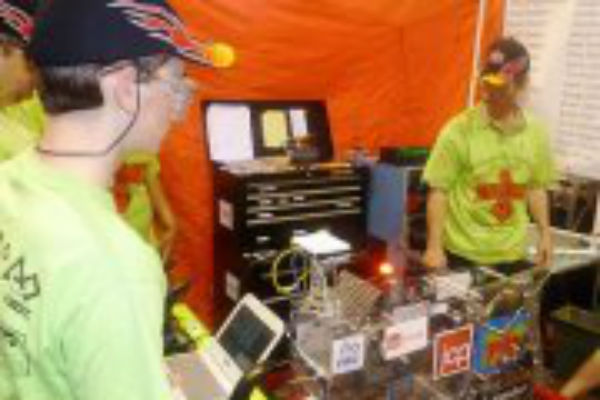 Higgin accepted an impromptu invitation via phone to bring Team 3936 to the Michigan City Area Chamber of Commerce Annual Dinner being held at Blue Chip Casino that same evening. Upon introducing Michigan City Robotics Team 3936 student team members to the several hundred attendees and announcing the team’s accomplishment earlier that evening, Team 3936 received a thunderous standing ovation from the crowd.

The Michigan City Robotics Team driving their robot, “The FireHawk” at the tournament.

“Our students, parents and mentors are speechless and stunned,” explained Coach Higgin.

“Since we began this journey last August, we have been welcomed with open arms by everyone in the community. And we now thank Mayor Meer, Horizon Bank and NIPSCO for putting the icing on the cake of this incredible experience this weekend.”

Once the whirlwind of events ended, Coach Higgin was left with some quiet time to reflect upon the team’s rookie season thus far:

“The Rookie all star award celebrates the rookie team that exemplifies a young but strong partnership effort, as well as implementing the mission of FIRST to inspire students to learn more about science and technology. Michigan City should be proud of the students and mentors who have worked hard and diligently to enjoy this honor, but this is a community partnership award and we accepted it for the community of Michigan City and LaPorte County because we have people from all walks of life and businesses who step up and support our youth. We accept the this All-Star Rookie Team Award on your behalf.”