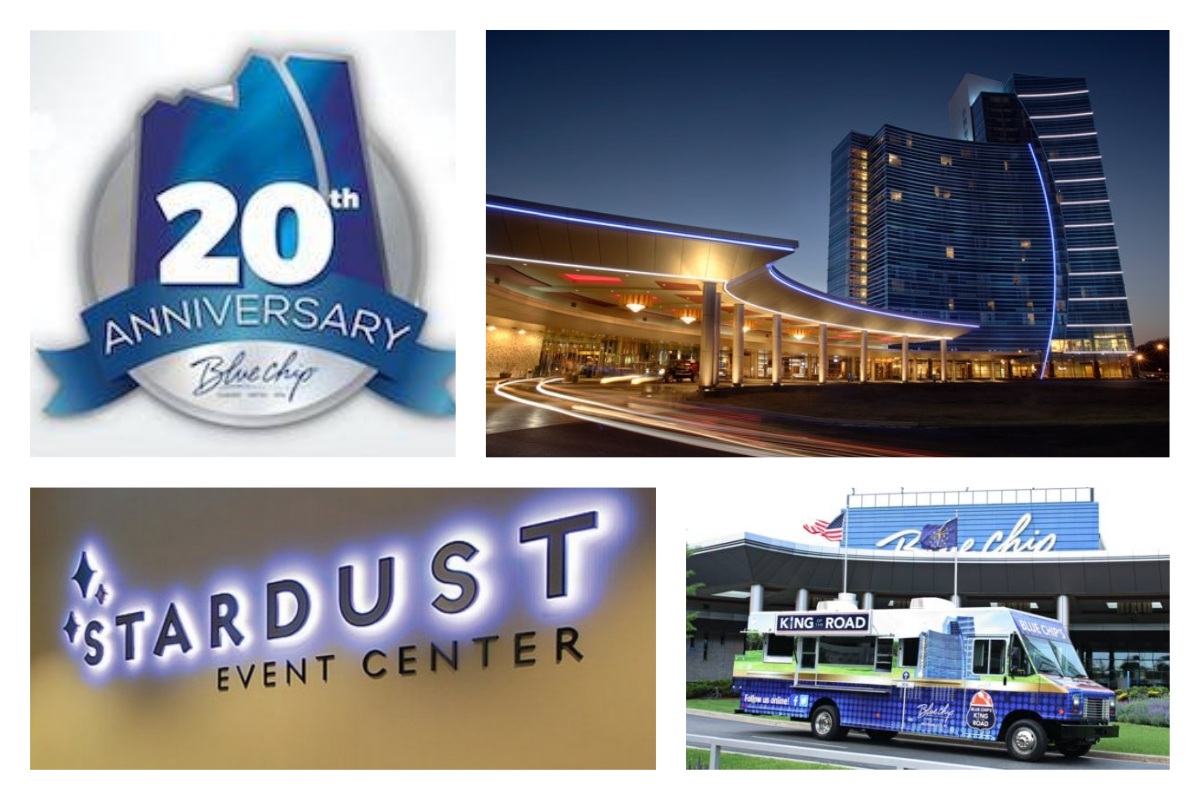 Blue Chip Casino, Hotel & Spa is celebrating their 20th Anniversary this month and the impact it's had on the Michigan City community, and the Northwest Indiana region, in that time has been profound. From the Michigan City Community Enrichment Corporation, which was created 20 years ago and has greatly benefited community not-for-profits, to the work and support by Blue Chip representatives as volunteers and board members with myriad local organizations, Blue Chip Casino and Boyd Gaming continue to be true community partners working towards the betterment of Northwest Indiana.

To get an idea of the real impact that Blue Chip Casino, Hotel & Spa continues to have on Michigan City and Northwest Indiana, we spoke with a wide range of local civic, business, and community leaders to get their thoughts on Blue Chip and how it changed the region for the better.

Here’s what they had to say:

“It’s exciting that Blue Chip has been here for 20 years now,” said Michigan City Mayor Ron Meer. “The partnership with the Michigan City community in regards to the infrastructure and development that we’ve been able to do, and beyond that the streets, sidewalks, and storm sewer projects, have been completed because we have an influx of anywhere between $11-$12 million a year into our community from Blue Chip.”

Michigan City’s partnership with Blue Chip has greatly benefitted many departments and facilitated projects across the city. It has allowed for the purchase of public safety vehicles like firetrucks, police cars, and, with the resources made available, it’s helped facilitate the building of Michigan City’s new police station.

“It’s been a good partnership. Our Enrichment Program is a part of our agreement with Blue Chip Casino and that’s about $750K mandated to go to nonprofits and philanthropic organizations, which helps organizations like the United Way, the Boys and Girls Club, and the Lubeznik Center. They provide jobs and are one of our biggest employers in the city. Even now they’re considering further investment and development on their campus and this will make Blue Chip Casino, and Michigan City, a great destination for conventions and events,” Meer concluded.

As Mayor Meer noted, Blue Chip Casino and Boyd Gaming have been enormous supporters of the United Way, both locally and on a national level, for many years. Local United Way of La Porte County Executive Director, Kris Pate, spoke about her work with the company and the impact they’ve had over the years.

“In 2014, we nominated Blue Chip Casino for the ‘Company of the Year’ award from the Indiana United Ways and they did receive that award,” Pate said. “Sam Boyd and Boyd Gaming is very supportive of the United Way throughout the country. We’ve always had some wonderful representation locally from the company to help us with campaigns and to help us in determining where the greatest need in the community is, and who should be allocated the funds that we raise.”

“In the experience that I’ve had with Blue Chip, especially when it comes to allocation in the community, they take it very seriously,” she added. “They have a real culture of helping not only the community but also their employees. It says a lot about Boyd Gaming as a whole that they invest so heavily in their local communities, and also in their employees.”

Clarence Hulse, Executive Director of the Economic Development Corporation of Michigan City, said, “Blue Chip has been a game-changer for the city. They’ve been a true partner that has helped fund community organization, provide capital to the city, and, for many of these projects, the seed money comes from the gaming fund. Blue Chip has also been giving funds through the community foundation to help nonprofits fund new ideas and new programs. Again, they’re helping residents of the city to enjoy these programs and get involved. The casino has been an anchor in the EDCMC’s budget as well and if it wasn’t for Blue Chip, we probably wouldn’t be this far along in the economic development process.

NIPSCO Economic Development Director, Don Babcock, spoke about Blue Chip’s impact on the community in saying, “Blue Chip Casino has been a tremendous positive force for Michigan City, La Porte County, and Northwest Indiana. They have outstanding leadership there with Lief Erickson and Jack Elia, and they’ve long been strong supporters of the community. One of the things that I admire is that they always build top-quality facilities. The architecture, particularly the hotel, is just outstanding and it is setting the bar for other investments, not only in Michigan City but in Northwest Indiana. In fact, it’s helped with the renaissance of Michigan City in that we are getting other investors in the city.”

“The other thing I think people don’t recognize is that the hotel itself throws off a significant tax increment which has been reinvested in the north end of the city,” Babcock said. “Projects like the North Point Pavilion, two-way streets, the new signage around town, and the new apartments at 5th & 6th at Pine Street have helped generate a lot of interest in the area. Blue Chip has been a big driver, not only in front of it but behind the scenes. It’s definitely helped draw many people to the city and Northwest Indiana, and the experiences that you can have there is just delightful.”

Marty Corley, President of the Rotary Club of Michigan City, said, “Their impact has been great for the city. Besides the financial impact, Blue Chip has given opportunities and instilled values in their employees who then go out, give back or invest in the community, and become positive role models. Blue Chip, all around, is a pillar of this community with the investment that they put back into Michigan City, whether through money, in-kind services, or how they encourage their employees to go out and get involved in the community. They’re just a fantastic partner to have on our side.”

Michigan City Chamber of Commerce President, Mary Jo Orlowski, reflected on Blue Chip Casino in saying, “Blue Chip has contributed so positively to the community over the last 20 years. They have helped with the infrastructure in the city and the community in terms of giving back for different projects. That’s been a definite positive. They contribute to so many nonprofits and other organizations to such a high degree that some of the programs, I don’t think, could be viable without their support.”

“The people that work at Blue Chip and the staff that they have is a top-down staff that is led with openness and integrity, and they really care about the people that work for them,” Orlowski said. “Boyd (Gaming) should be proud that they represent their company and that casino so well. They have the highest integrity, they are fair, they’re easy to work with, and they’re inclusive. That’s really what differentiates them - they have such a powerful, caring team.”

Michigan City Police Chief Mark Swistek happened to be sitting in his office and noticed something on Michigan Blvd. that brought Blue Chip Casino to mind.

“I’m watching a Cardinal charter bus head into Michigan City passing the police department and I’m almost certain it’s heading to Blue Chip Casino,” said Swistek. “That right there is such great exposure for Michigan City to have outside visitors coming into our community to visit our wonderful Blue Chip Casino. It’s really one of the biggest assets that we have here in our community.”

Not only does Swistek recognize the economic impact that Blue Chip has had, but he also spoke about ways in which the organization has played a role in furthering the mission of the Michigan City Police Department.

“Blue Chip has been a real asset to Michigan City for the past 20 years,” he added. “Their executive management team has been exceptional to work with. They continually assist the Michigan City Police Department with a lot of our community outreach programs, and they’re a big partner to us when it comes to our training needs. If we need a larger venue to host training they’ve always generously assisted us with utilizing one of their event centers for those events.”

Michigan City Area Schools Superintendent, Dr. Barbara Eason-Watkins, said, "We truly value the contributions of Blue Chip, which has supported our efforts in many ways. They've donated meeting space to us and have been a venue for fundraisers to support our athletics and music programs. Their chefs have worked with our Culinary Arts students through our Career and Technical Education program. They've also supported the Michigan City Chamber's Education Fund, which assists MCAS with a variety of projects, including community awareness, educator training, student field trips, career/tech initiatives, and more. We appreciate the active role they play in supporting our community, improving the quality of life for our area, and in supporting business and economic development in our region."

Salvation Army of Michigan City Lt. Kerry Bartsch, who leads the organization with her husband, Johnny, is grateful for the community-minded efforts of Blue Chip Casino and the Michigan City Community Enrichment Corporation.

“The biggest amount of funds that we receive for the programs that we provide come from the Enrichment grant, which ultimately comes from the casino,” Bartsch said. “Honestly, our men’s shelter, which operates six months out of the year, there’s absolutely no way we would be able to provide that program if we didn’t receive that money. We also get a grant for our food pantry and, I don’t think I’m wrong in saying, we are the biggest pantry in Michigan City.”

“We serve around 1100 clients each month at our food pantry,” Bartsch described. “Without those funds I don’t think we would be able to do what we do, at least not at the level in which we do it. They’ve been great whenever we need things, like, for example, our Donut Eating Contest which they donated the grand prize. They’ve donated so many items that our clients are able to use during our Christmas distribution. We just have a great partnership.”

Blue Chip Casino’s impact on the Michigan City community has been profound in the 20 years since it first opened its doors. From businesses to civic and philanthropic organizations, Blue Chip has helped mold the city and surrounding communities into the vibrant, growing destination that it is today.

Blue Chip Casino, Hotel & Spa will be hosting events and giveaways all month long to celebrate their 20th Anniversary. To find out more, go to: www.bluechipcasino.com