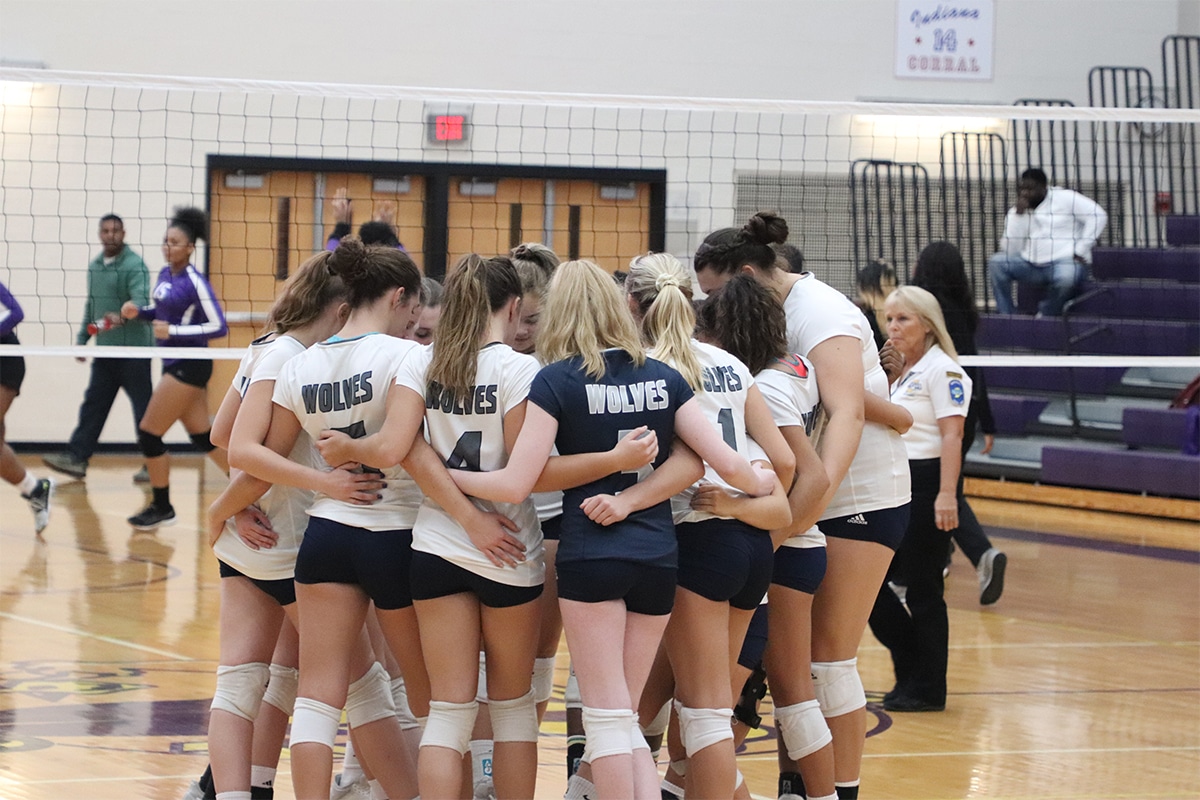 The best sports teams demonstrate more than just technical skills: the best teams demonstrate sportsmanship, leadership, determination, and good attitudes in addition to athleticism. The Michigan City High School Volleyball team checks off all of these on the list. As evidenced by their past weekend at the Regional Finals, all these qualities propel them to success.

Marking off his third year as the MCHS Volleyball head coach, TR Harlan described the team’s season in one word: “tremendous.”

According to Coach, the year started with a stroke of bad luck that turned out to be a blessing in disguise: the team’s prized middle hitter, Hannah Noveroske, had a torn ACL that prevented her from playing. Despite the challenges this presented, the rest of the Wolves pulled to the forefront to keep everyone’s game fresh, plus gave some girls opportunities to grow further.

“We started four sophomores, and I think it was important that they find some success early,” Harlan said. “We also started the year 11-0, so they got to build some confidence while learning. Everybody always says that you learn a lot from losing, but you can learn a lot from winning, too, and it’s a lot more fun!”

Harlan said that the team’s captains, Junior Reece Shirley and Senior Emily Kinney, did an “unbelievable job” keeping the team together.

“They were called to do a lot more than they’d ever done before, and they really kept us focused and did a great job of keeping our younger kids up to speed at the varsity level,” Harlan said. “Emily and Reece have to get a lot of credit for the success we’ve had, especially so early in the season before Hannah came back from her injury.”

This past weekend, the Wolves served up serious competition at the Regional Finals, defeating Warsaw in their first game of the morning.

“We might just have played our best game of the year, which is what you want to do at the end of the season,” Harlan said of the Warsaw game.

Though the Wolves lost to Penn later in the Finals, Harlan set aside disappointment for pride and amazement at how far the team pushed themselves.

“It’s been a tremendous year for us. I couldn’t have asked for anything more from them; they gave us everything they had,” Harlan said. “Sometimes you just don’t score enough points.”

“Coach Harlan has done a great job in his time here,” said Craig Shaman, Director of MCHS’s Athletic Department. “He has really helped our girls to be the best volleyball players and volleyball team they can be. Their success on the court is matched off the court as Coach Harlan has developed a group of girls that are all good sports, tough competitors, and dedicated to each other.”

Nevertheless, both Shaman and Harlan give the bulk of their credit and praise to the team members themselves.

“While Coach Harlan has done a great job, the girls on the team must be given the majority of the credit for winning two sectionals in a row,” Shaman said. “They're the ones that put in the work on a daily basis. They're the ones who have dedicated themselves year-round to being the best they can be.”

Harlan also extended the credit to the circle of influencers just beyond the team: their parents and the Michigan City community.

Harlan and the rest of the Wolves are resting up from an intense year, but everyone is looking forward to the years ahead. Emily Kinney is venturing on to Ferris State to play volleyball in her college career, Hannah Noveroske is headed to Xavier to play basketball, and the MCHS volleyball team is only going to continue to grow.

“I’m really proud of the program that we’re building,” Harlan said. “We have tremendous support from the community, our parents, our administration. They’ve given us everything we need to succeed.”