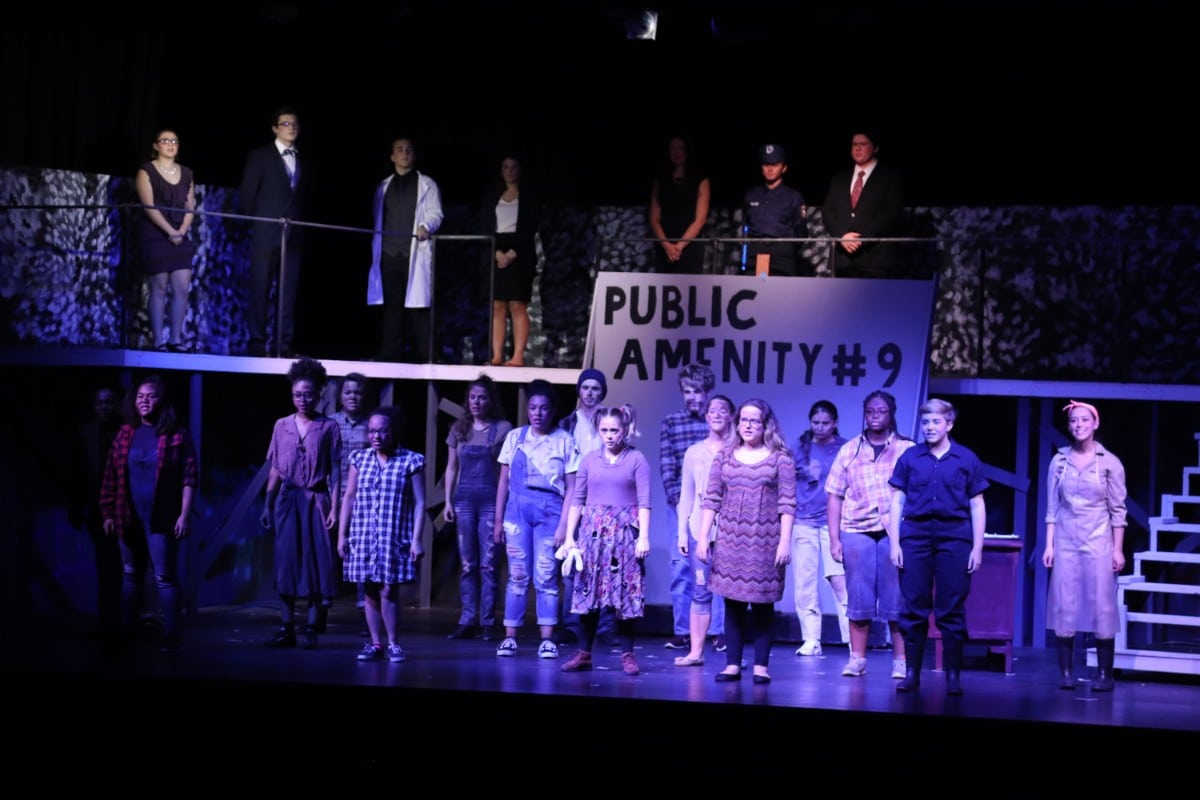 A rather strange tale unfolded on the stage of the Michigan City High School Auditorium on Friday. A megacorporation grappled with freedom fighters over the central issue in a dystopia – urinals.

Through song, dance, and fantastic production the Michigan City High School Drama Club played out the events of “Urinetown,” a satirical comedy musical where a catastrophic draught causes a water shortage that makes private toilets an impossible luxury. A megacorporation controls all public toilets and requires stiff fees and anyone breaking harsh urination laws is sent to “Urinetown,” an ambiguous, supposedly horrific place.

Tackling the legal system, capitalism, politics, and more, it won numerous Tony Awards and other honors. Of course, the title makes people skeptical and when MCHS Theatre Director Charles Puetzer pitched it to the drama kids, they could not help but initially question the teacher’s reasoning.

“At first they were pretty hesitant about, they were asking ‘okay, we’re doing a show about pee?’” Puetzer said. “But after a while, once we started to get into it, they got more and more excited. Everyone’s so pumped for opening night.”

The show features complex music and choreography, which both challenged and enticed the students into giving “Urinetown” their all.

“At first, I was just like ‘what even is this,’ but then I watched it and it’s actually really funny and has complicated music, which only makes it better,” said Jenna Dawson, an MCHS senior who played Penelope Pennywise on opening night. “Putting all of this together and getting on stage shows a kind of commitment. It’s me proving myself, and everybody else showing me that they put in the work which makes me really proud. I like being part of these productions because I know we’re just a big old team.”

For most of the cast and crew, putting the show together is about a whole lot more than just improving their acting or dancing skills, it is a very personal experience.

“I’ve definitely grown as a person through this,” said Bailee Laux, a senior who stars as Hope Cladwell. “In theatre, it’s just a huge family and there are so many people with different personalities and stuff. We adopt all these diverse things from each other and it’s added a lot to me.”

As parents and friends looked on, and the students put all their effort on stage, Puetzer could not help but get a little emotional.

“Theatre is an absolute love of mine and I love doing it,” he said. “To see some of these kids who started out really shy and timid grow to me is like, if nothing else, love or hate the show, I’ve accomplished what I’m here to do. My job is to take these kids and help them grow, and theatre is a great background for that and it’s what makes me happy.”

There are still two more days to catch “Urinetown” at Michigan City High School. Swing by on Saturday, November 10th at 7pm or Sunday, November 11th at 2pm to see the most creative musical about public toilets imaginable.