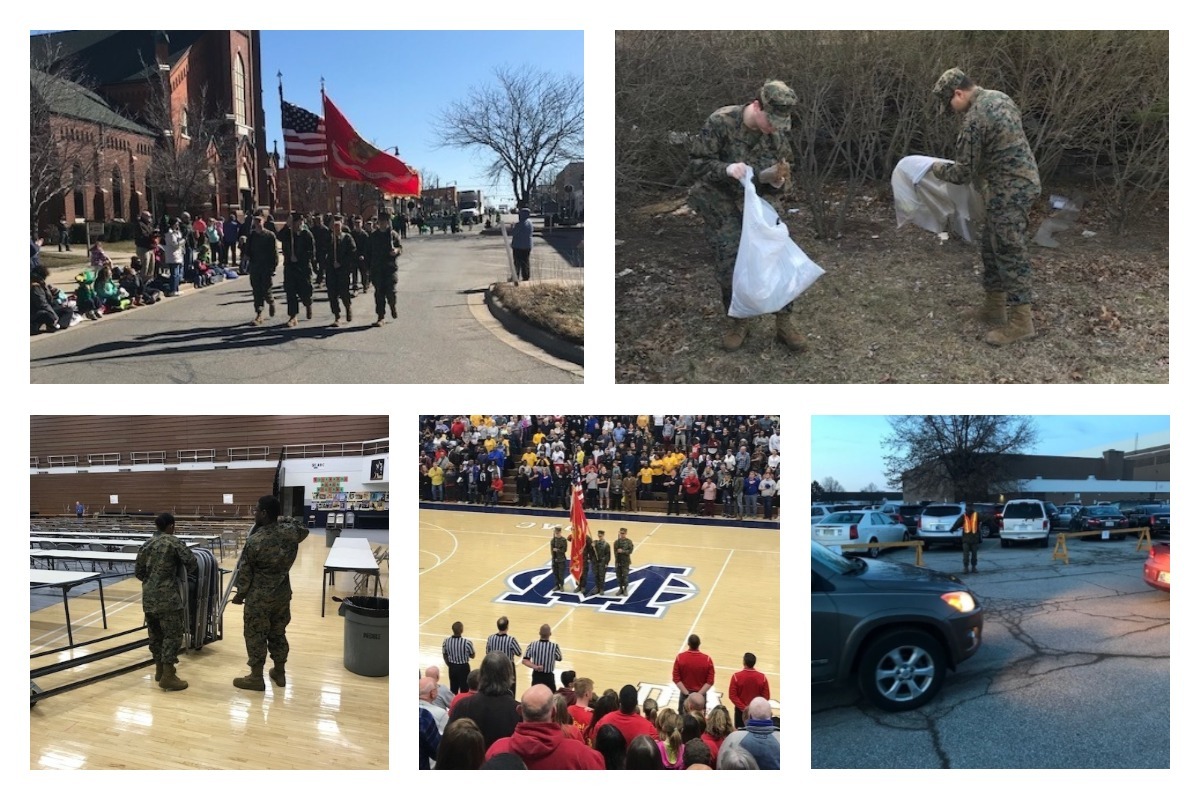 The Michigan City High School (MCHS) Marine Corps Junior Reserve Officer Training Corps (MCJROTC) conducted numerous community service activities during March. Among those activities were assisting in the establishment and disestablishment of tables and chairs for the Indiana Statewide Testing for Educational Progress-Plus. March 10th was an exceptionally busy day for the cadets, as they supported the Indiana High School Athletic Association’s Regional Boys Basketball tournament held at MCHS.

Thousands of fans from throughout Northwest Indiana were directed by cadets to park their vehicles safely and orderly for both the morning doubleheader and the night championship game. The MCHS Color Guard presented the National Color for the playing of the National Anthem in the morning and evening. That same day, the cadets led the Michigan City St. Patrick’s Day parade. That evening, they provided the Color Guard for the Disabled Americans Veterans’ Americanism program. Cadets also supported the MCHS Parent/Teacher conferences, the Wolfpack round-up for incoming freshman, and a clean-up of a vacant lot in Michigan City.

“It has been a busy month for us,” said Senior Marine Instructor Major Tom McGrath. “We were also notified that we were selected to compete in the Marine Corps National Drill Competition, so our Drill Team has been kicking it into high gear in preparation for that event.”

Master Sergeant Jeff Benak commended the cadets for their versatility and endurance. “Our Drill Team cadets are here for practice at 5:45 every morning. They are also the ones who do the bulk of our community service. They are balancing their school work with JROTC activities, and some of them also have part-time jobs.”

The Marine Corps National Competition is April 21st in Gray, TN. The trip is being conducted at no cost to the cadets or Michigan City Area Schools. Transportation and Lodging are being funded by the Marine Corps. The MCJROTC Booster Club is providing the cadets meals. Michigan City is one of 16 schools out of 250 schools nationally who were selected, and the only school out of the Midwest.