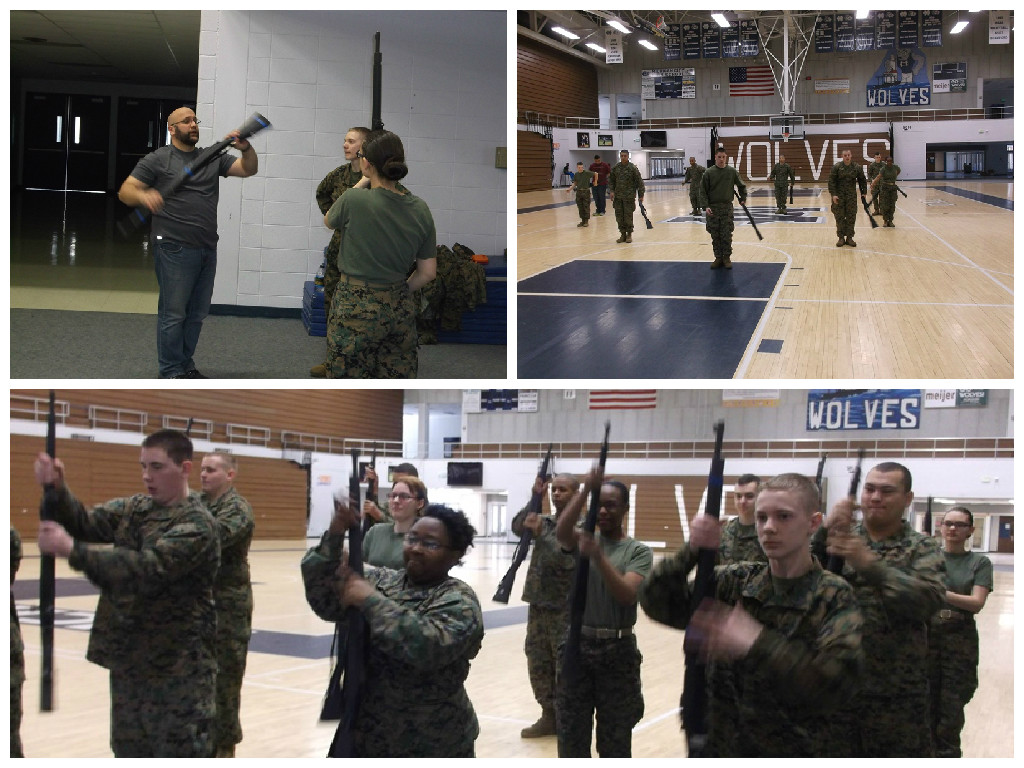 The Michigan City High School (MCHS) Marine Corps Junior Reserve Officer Training Corps (MCJROTC) conducted a military drill clinic on Saturday, March 28, 2015, in the high school gym. The clinic focused on armed exhibition drill, modeled after the Marine Corps Silent Drill Platoon. It is “fancy” drill, with the emphasis on showmanship through the spinning and throwing/catching of rifles, along with creative drill movements not found in the Marine Corps Drill Manual. Eighteen cadets participated in the clinic, instructed by Mr. Rob Rodriquez of Portage, IN. Rodriguez was a JROTC cadet as a high school student at Portage High School. In his senior year, Portage earned a third place finish in the JROTC National Drill Competition in Daytona, Florida. Individually, he and a partner took third in the Duet and he earned a fifth place trophy in the Solo competitions. Rodriguez then enlisted in the Marine Corps. While stationed in Hawaii, he moonlighted with the Kings Guard, an armed exhibition drill unit that performed for tourists and was paid by the Hawaii Bureau of Tourism. He currently volunteers as the coach for Portage High School’s drill team.

“I was impressed with how quickly these Michigan City cadets caught on to some difficult drill movements,” Rodriguez said. “These kids have a great attitude and really want to represent Michigan City well at these drill competitions.”

Major Tom McGrath, the Senior Marine Instructor, stated that, although this has been a very good year for the drill team, the exhibition events of the drill competitions needed improvement. “Since exhibition drill is not taught in the regular Marine Corps, most JROTC instructors are not capable of teaching the intricate spinning, throwing and catching techniques, along with choreographing a routine. Mr. Rodriguez did a superb job of instructing and the cadets responded well. We hope to use some of what we learned today at our final drill meet, and then use this to build a really competitive routine for next year.”

Master Sergeant Jeff Benak, the Marine Instructor, commented on the dedication of the cadets and their willingness to improve. “This was the fourth consecutive Saturday that these cadets have participated in an activity. We had the St. Patrick’s Day Parade, the Regional Basketball Tournament, the Romeoville Drill Meet, and now this drill clinic. Our cadets are committed to supporting our community, our school, and being the best JROTC program we can possibly be.”

The cadets final drill competition will be at Eisenhower High School in Blue Island, IL, on April 11th. They also have numerous community service activities prior to graduation, to include supporting the four home track meets, helping the VFW and Lions Club, and marching in the Michigan City Memorial Day Parade and Ceremony. Cadets will also participate in two summer camps. The first will be at the St. John’s Northwestern Military Academy in Delafield, WI, from June 8-13. The second will be a Science, Technology, Engineering and Math (STEM) camp at The Citadel in Charleston, SC, from July 5-14. Both camps are conducted at no cost to the cadets or to Michigan City Area Schools. They are funded by the Marine Corps and donations from the MCJROTC Booster Club and local organizations.