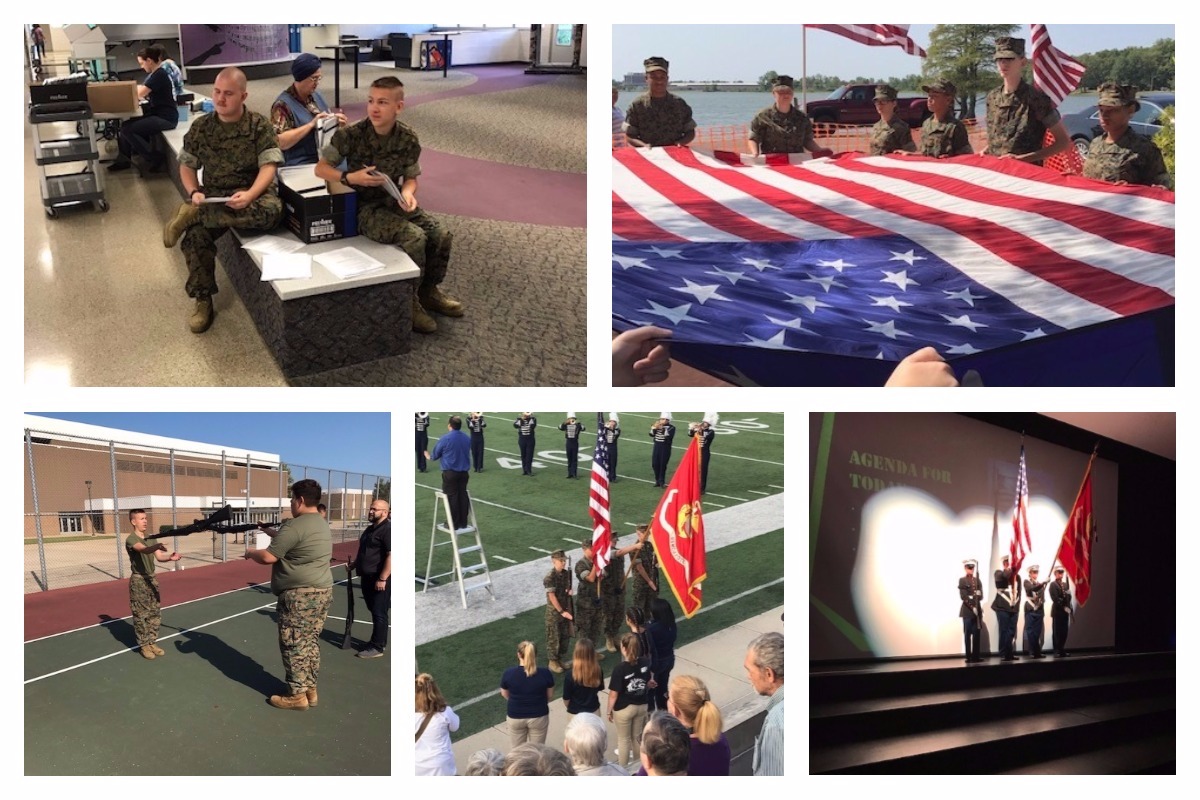 The following day, cadets assisted the MCHS staff and incoming freshman for the Freshmen Orientation. The first Friday of the school year opened the football season, so the Color Guard presented the colors as the MCHS band played the National Anthem. Cadets supported a Veterans Jamboree at Fox Park on August 26. “We have a really good group of cadets this year,” said Senior Marine Instructor Major Tom McGrath. “Many of our first year cadets have already jumped right in and are already involved with our community service projects.”

Besides supporting MCAS and the community, cadets have started preparing for the upcoming military drill competition season. MCHS hosted an armed exhibition drill clinic. Armed exhibition is an event in a drill competition where the routine and movements are left up to the cadets’ imagination and initiative. The only restriction is that it must have a military flavor. It therefore lends itself to the spinning and throwing of rifles, along with movements not normally done in military drill. The primary instructor was Mr. Rob Rodriguez. Mr. Rodriguez is a former Marine who, while stationed in Hawaii, moonlighted with the famous Kings Guard, an armed exhibition drill team that performed for tourists and were paid by the state’s Bureau of Tourism.

Also, as a MCJROTC cadet a Portage High School, he led their armed exhibition platoon that finished third at the National JROTC Drill Competition. This was the second time Rodriguez had instructed a clinic at MCHS. “I really enjoy doing this clinic at Michigan City,” Rodriguez said. “The cadets here have a great attitude and are eager to learn.” Master Sergeant Jeff Benak, the Marine Instructor, stated that it was the positive attitude and desire to improve that has led to the program’s drill team achieving so many awards. “We do not have the numbers or facilities that some other schools have, but our cadets compensate for that with their hard work.”

The cadets will continue to support numerous MCHS events throughout the September. These include the MCHS Open House on September 6, all home football games to include Homecoming on September 15, and the Veteran of the Year Dinner in LaPorte on Sunday, September 10. The cadets’ first competition will be the Raider Challenge at Hobart High School on October 14.