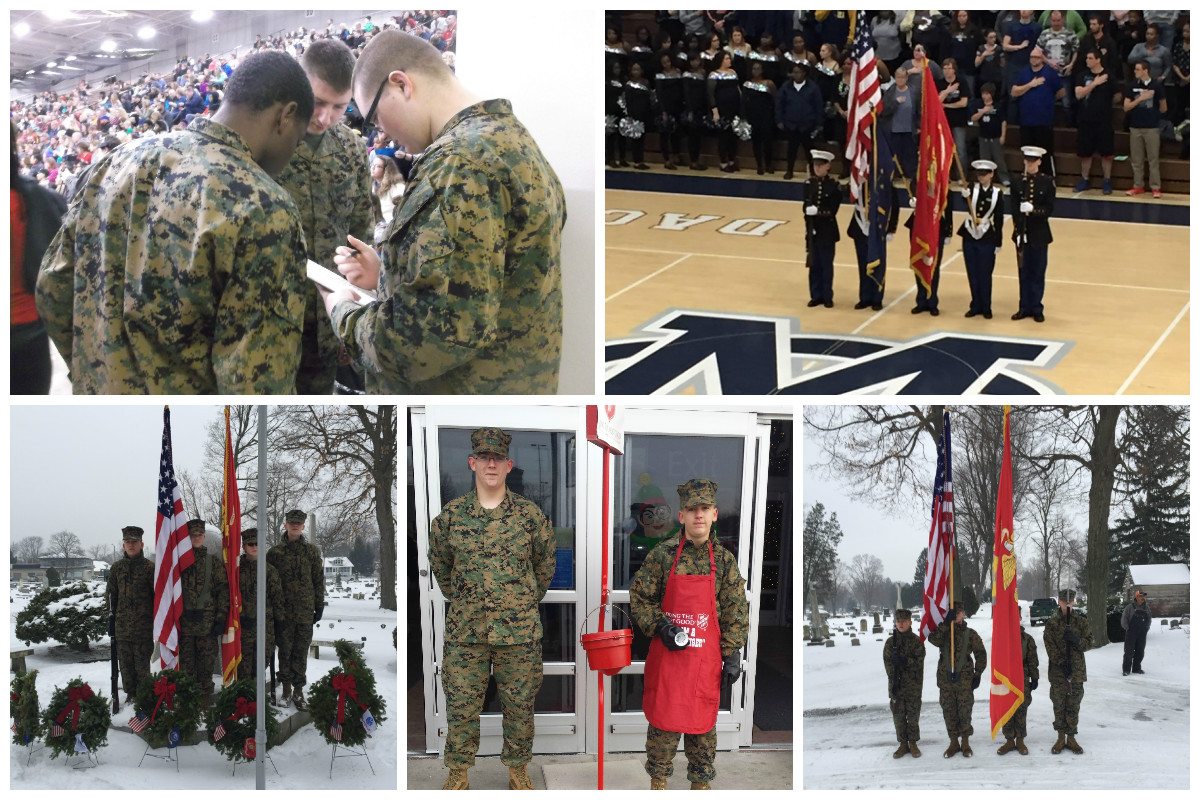 With the high commercialization of Christmas, the most important aspect of the holiday- the spirit of giving- is often lost. The cadets of the Michigan City High School (MCHS) Marine Corps Junior Reserve Officer Training Corps (MCJROTC ) demonstrated unselfishness by giving of their time and talents to Michigan City Area Schools (MCAS) and the surrounding community. Cadets helped set-up, worked, and then cleaned up for the One City One Sound concert on December 1st.

This concert involved every school in MCAS and was well-attended by the community. Although the MCJROTC Drill Team had a competition in Chicago on December 3rd, some non-drill team cadets helped the Salvation Army with their Stuff-A-Bus project. A number of cadets returned to the Salvation Army the following Saturday, December 10th, to do bell-ringing at a number of Michigan City stores. On the statistically busiest shopping day of the holiday season, the Color Guard participated in the Wreaths Across America ceremony at the Greenwood Cemetery on December 17th. After the ceremony, wreaths were placed on veteran graves. The Color Guard also presented the colors at the home basketball games on Dec 2nd, 3rd, and 15th.

“Our cadets know that there are many member of our community who are struggling financially,” said Senior Marine Instructor Major Tom McGrath. “They are always willing to help out, particularly during this time of the year.”

Master Sergeant Jeff Benak, the Marine Instructor, commented on the time-management skills of the cadets. “During the hustle and bustle of Christmas, our cadets still find time to support school activities and the needs of our community.”

The MCHS Drill Team will be practicing over the Christmas break in preparation for their next competition at East Aurora High School in Aurora, IL, on January 14th and for their presentation to the MCAS middle schools on January 25th. The middle school presentations are very important, as the Marine Corps requires that MCHS have a minimum enrollment of 100 or face disestablishment. The current enrollment is 114. The cadets will also be providing the Color Guards for all of the remaining home basketball games.