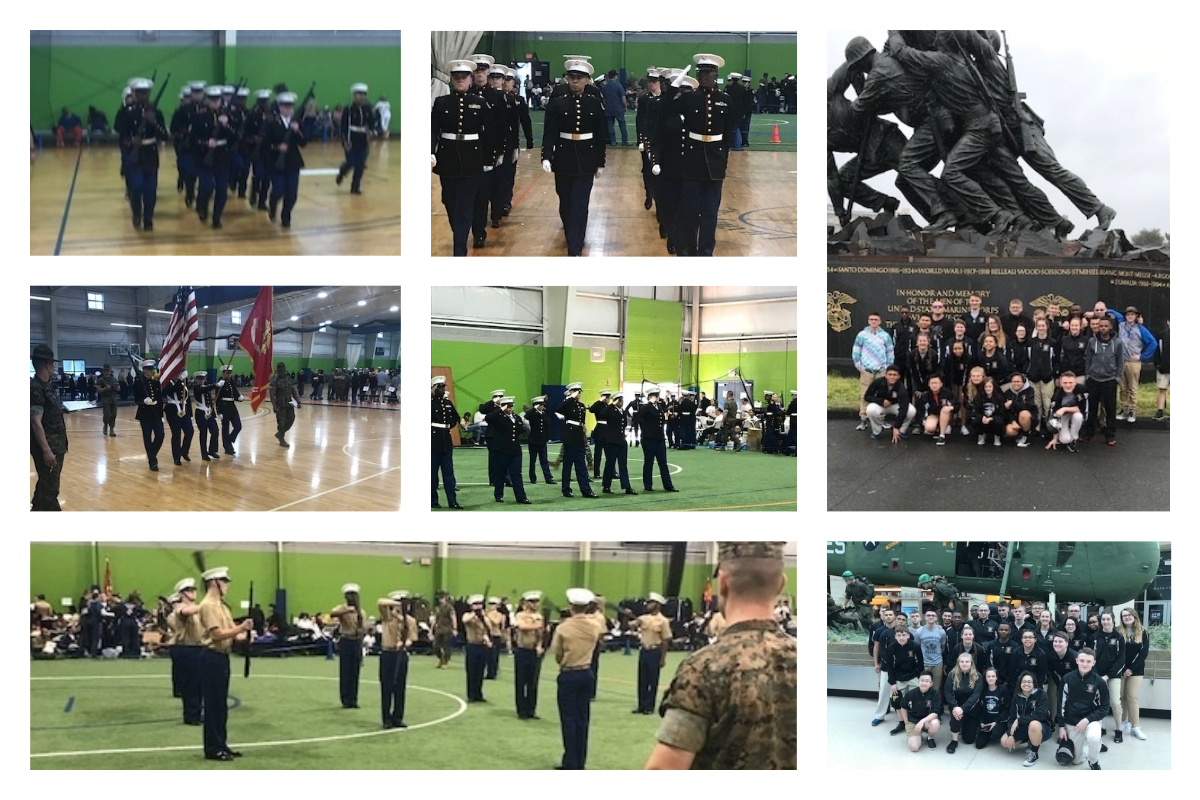 The Michigan City High School (MCHS) Marine Corps Junior Reserve Officer Training Corps (MCJROTC) competed in the MCJROTC National Military Drill Competition on April 13th in the Washington, DC suburb of Chantilly, VA. 16 schools from around the country, stretching from Hawaii to Massachusetts, competed in six events: Personnel Inspection, Armed Regulation, Unarmed Regulation, Armed Exhibition, Unarmed Exhibition, and Color Guard. On the day prior, the cadets also toured some of the historic sites after an early morning practice at Mount Vernon High School, near the home of George Washington. The trip was conducted at no cost to the cadets or to MCHS. It was primarily funded by the Marine Corps with augmentation from the MCJROTC Booster Club.

“This was a great experience for our cadets to compete against the best of the best,” said Senior Marine Instructor Major Tom McGrath. “We had some mental lapses in some of our events, but, hey, they are high school students and that will happen. Still our Color Guard and Unarmed Regulation finished seventh in their respective categories. I am proud of the way our kids have competed all year and the positive way they have represented our school and community.”

Master Sergeant Jeff Benak, the Marine Instructor, also had positive comments on the team despite not taking home any trophies. “There are 268 MCJROTC programs nationally. Just to qualify to compete here is an accomplishment. And, despite us losing many seniors from the team, we have some very good underclassmen returning to help us build a foundation for next year.”

The cadets have no time to rest. On April 18th, the entire program will stand their Regional Director’s Inspection. The cadets will be evaluated on their personal appearance and knowledge of General Military Subjects. The inspection will then shift to the program’s administration and logistics. A report is then sent to the MCJROTC Headquarters in Quantico, VA, to be reviewed by the National Director. The cadets will continue doing community service in support of Michigan City Area Schools and the community, which includes the Michigan City Memorial Day parade and ceremony and the MCHS graduation. In between the end of the school year and graduation, the cadets will be attending a week-long Leadership Camp in Wisconsin. Cadets will continue to be involved with community service, ceremonies, and other camps along with drill team practice over the summer.