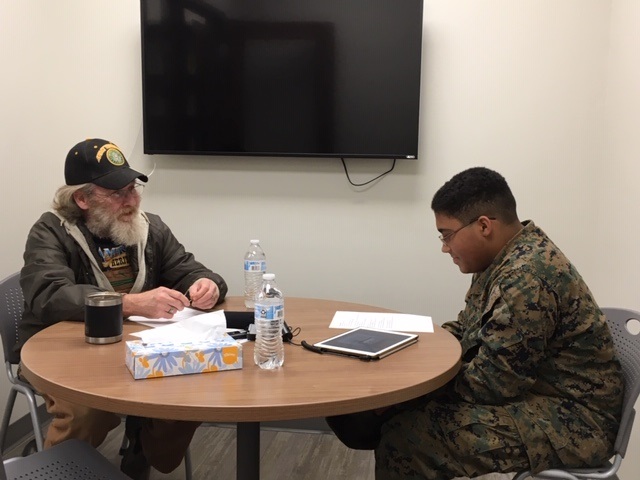 “Those who fail to study history are doomed to repeat it” is a phrase uttered by many who say that there is much to be learned from the past. Cadets Lance Corporals (LCpl) Declan Rice and Dontrell Maitland of the Michigan City High School (MCHS) Marine Corps Junior Reserve Officer Training Corps (MCJROTC) participated in the LaPorte County Library Veterans Oral History project, whereby local veterans recounted their experiences while serving our nation during war. Ms. Monicah Fratena, the LaPorte County Librarian who heads the project, stated that the cadets did a good interviewing the veterans. “They were very respectful and showed great enthusiasm to hear of the exploits of members of our own community who experienced combat.”

Both cadets were very impressed with the veterans whom they interviewed. “It was great to get a first-person perspective instead of just reading a description out of a book,” said LCpl Rice. LCpl Maitland was equally impressed, saying that interviewing the veterans was a motivator for him to look into the military as a possible career.

Major Tom McGrath, the Senior Marine Instructor at MCHS, said that this was a great educational opportunity for the cadets. “We teach military history as part of the curriculum. To be able to obtain a first-hand account of a battle is really a great experience for these young cadets.” 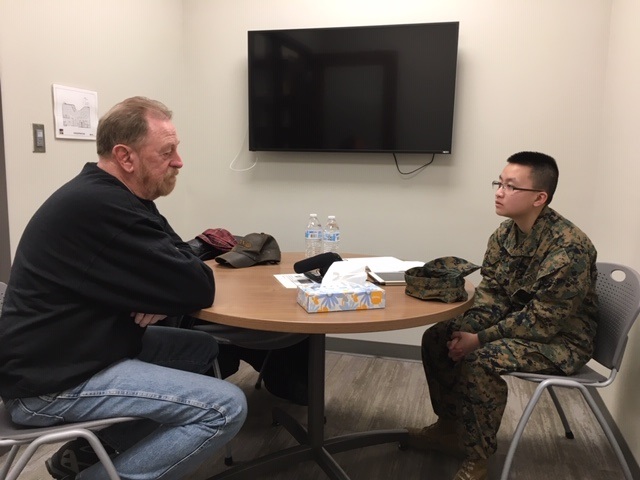 Master Sergeant Jeff Benak, the Marine Instructor, also saw this as a great teaching tool. “These cadets are part of a program that can really enhance the education of students and the general public in LaPorte County regarding service to our country.”

Both Rice and Maitland are also member of the MCHS military drill team. The cadets will be in action next on March 2nd at Pike High School in Indianapolis. Following that meet, they will compete for the MCJROTC National Championship in the Washington, DC area on April 13th. The cadets are also active in providing service to the school and community. They will join many cadets supporting the boys basketball regional tournament on March 9th, as well as marching in the Michigan City St. Patrick’s Day Parade on the same day. March 14th is the High School Parent/Teacher Conference Night as well as the Wolfpack Round-up. Cadets will assist in both of those events.