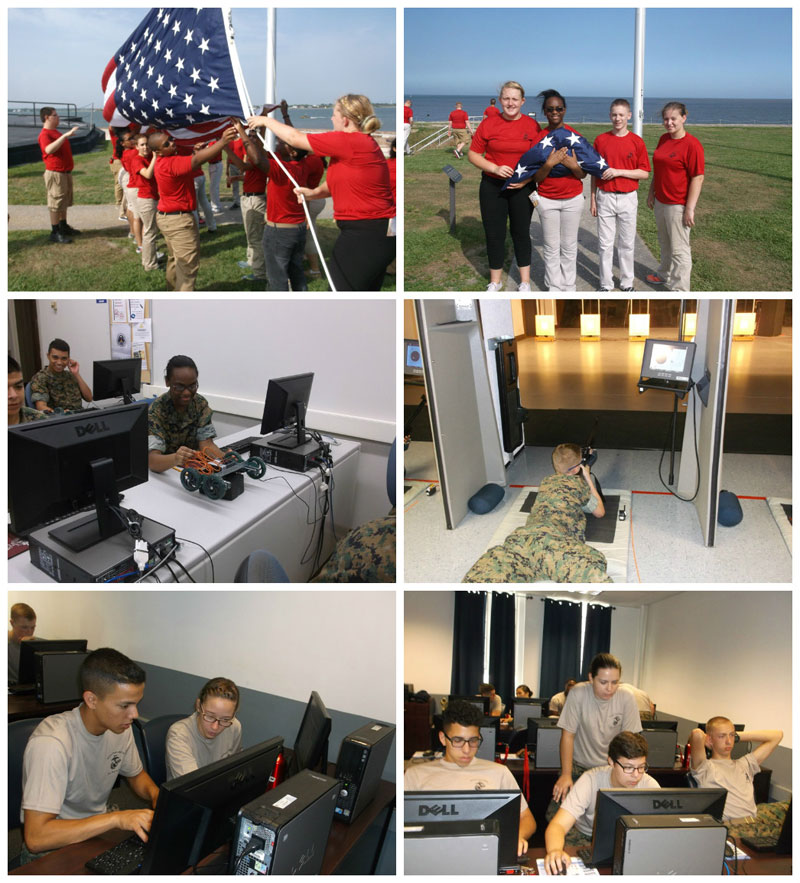 Cadets from the Michigan City High School (MCHS) Marine Corps Junior Reserve Officer Training Corps (MCJROTC) participated in a Science, Technology, Engineering, and Mathematics (STEM) camp conducted at The Citadel (The Military College of South Carolina) in Charleston, South Carolina from July 5-14, 2015. Cadets travelled via a charter bus for 17 hours each way to receive training in the following areas: Robotics, Virtualization, Linux, Cisco, and Forensics. Cadets started their day with physical training at 6:00 am, and did Marine-related training like marksmanship after the evening meal until 9:00 pm. Additionally, cadets visited the Marine Corps Recruit Depot at Parris Island, Fort Sumter (site of the start of the Civil War), and conducted two battlefield studies. Guest speakers included the President of The Citadel, the Commissioner of the Air Force Association that sponsors the CyberPatriot program, and Medal of Honor recipient retired Marine General James Livingston. The camp was conducted at no cost to either MCHS or the cadets. It was completed funded by the Marine Corps.

The objective of the camp was to prepare cadets to compete in CyberPatriot, the national computer security game where high schools react to a fictional attack on a country’s or a business’ computer information system. This competition was simulated on the last day of the camp. Last year, Michigan City was the state runner-up in the national competition that holds its preliminary rounds from October to December. “We had the most cadets in our MCJROTC Region attend the camp,” said Senior Marine Instructor Major Tom McGrath. McGrath was also in charge of cadets from 6 other schools from 5 states. “This was a tremendous opportunity for our cadets to be exposed to a possible career in cyber security, a career that can be very rewarding, both professionally and financially, “he said.

The JROTC CyberPatriot team is advised by Mr. Ralph Gee, Engineering and Technology teacher at MCHS. “We are very fortunate to have Mr. Gee to help guide our cadets to be more tech-savvy,” said Marine Instructor Master Sergeant Jeff Benak.

Cadets will be busy supporting the community and school district after they return from South Carolina and prior to the start of the next school year. Cadets will be supporting the Grand Prix boat races at Washington Park July 31, August 1-2, the International Drum and Bugle Corps competition at Ames Field on August 3 and 4, the preparation and conduct of the Back-to-School Rally for Michigan City Area Schools August 11, 12, and 13, and the Elston YMCA clean-up August 14 and 15. Cadets will also be conducting voluntary drill practice to prepare for the upcoming military drill competition season during the school year.