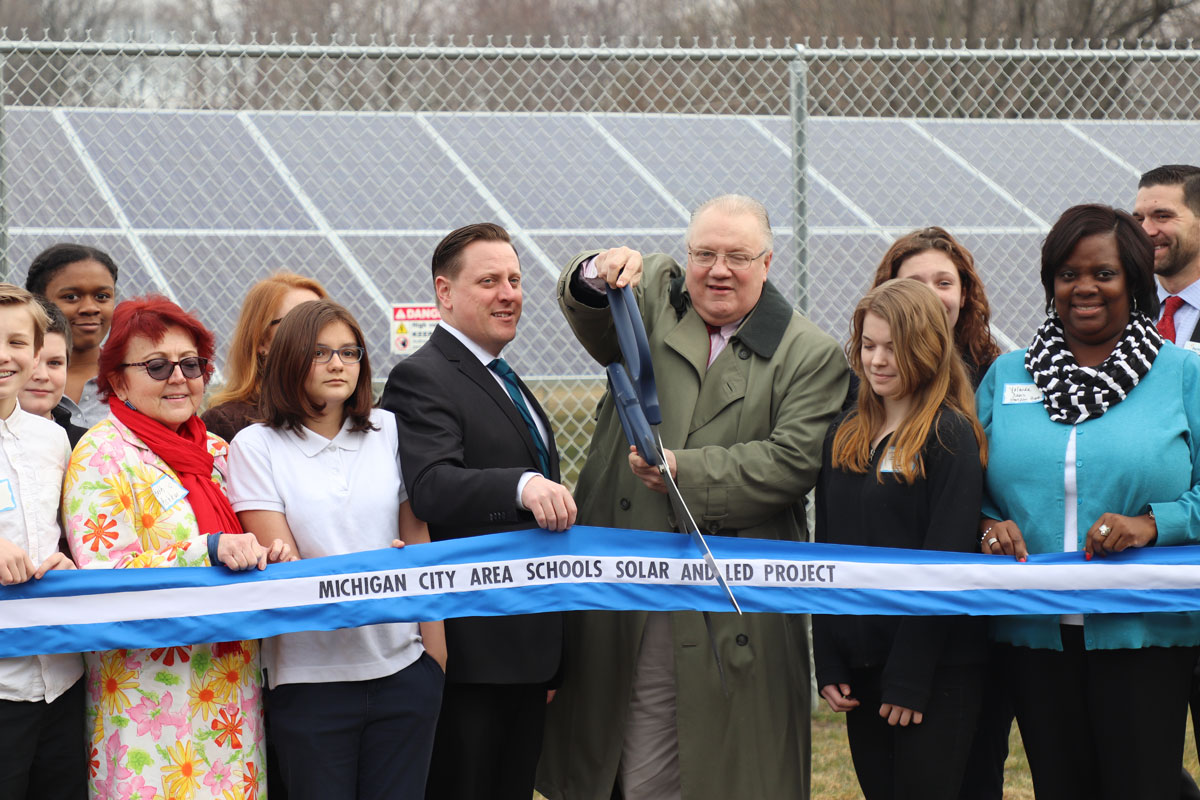 On Wednesday morning, representatives from Michigan City Area Schools and the community gathered to celebrate an exciting step in the school’s green initiative. With the unveiling of seven ground-mount solar arrays, the school took a big step forward in realizing over $704,000 in annual energy savings.

Dr. Barbara Eason-Watkins, Superintendent for MCAS, expressed her pride and excitement for the project while addressing the crowd.

“We are very proud of this project,” began Eason-Watkins. “It’s the largest undertaken by any school system in Indiana to date.“

Such a large project had many talented people behind the wheel, constantly steering the project to success. School Board President Donald Dulaney was one such individual and was thrilled to see many of the school’s needs addressed. This solar panel installation at the school not only addresses many of their energy needs, but saves money, all without additional cost on the taxpayer.

“One of the assets our district has is empty space,” explained Dulaney. “That’s a big asset with no way to utilize. Performance Services came up with a plan to use the empty space as solar farms. We were a good fit because we had so much space.”

Dulaney also brought to light the positive influence these solar panels will have, now and later, on both the school and its students.

“We tried to set the table for the future. This year we’ll realize over $50,000 in savings. Year 21 will see almost a million in savings after everything is paid for,” said Dulaney. ”There’s also a curriculum brought in for the schools - that curriculum is involving alternative energy sources. That’s a big part of what’s going on and was included in the price tag.”

One of the many community partners who aided in this endeavor was Horizon Bank. Horizon has always found helping the school community to be a positive initiative and celebrated its ability to be there for the community. Bill Gertner, Assistant Vice President, highlighted their pride in aiding the school.

“We’ve had a long partnership with this school system and community, our corporate headquarters are here. It just made sense. From that standpoint, we wanted to jump on board as quickly as possible,” explained Gertner.

With the school board eager to press forward and financing planned, the city also stepped forward and expedited the process, granting the school’s permits quickly and efficiently. With the entire community behind the project, it was successfully completed. The dedication ceremony proved to be a successful start to what promises to be a significant source of savings in both energy and money for the school.