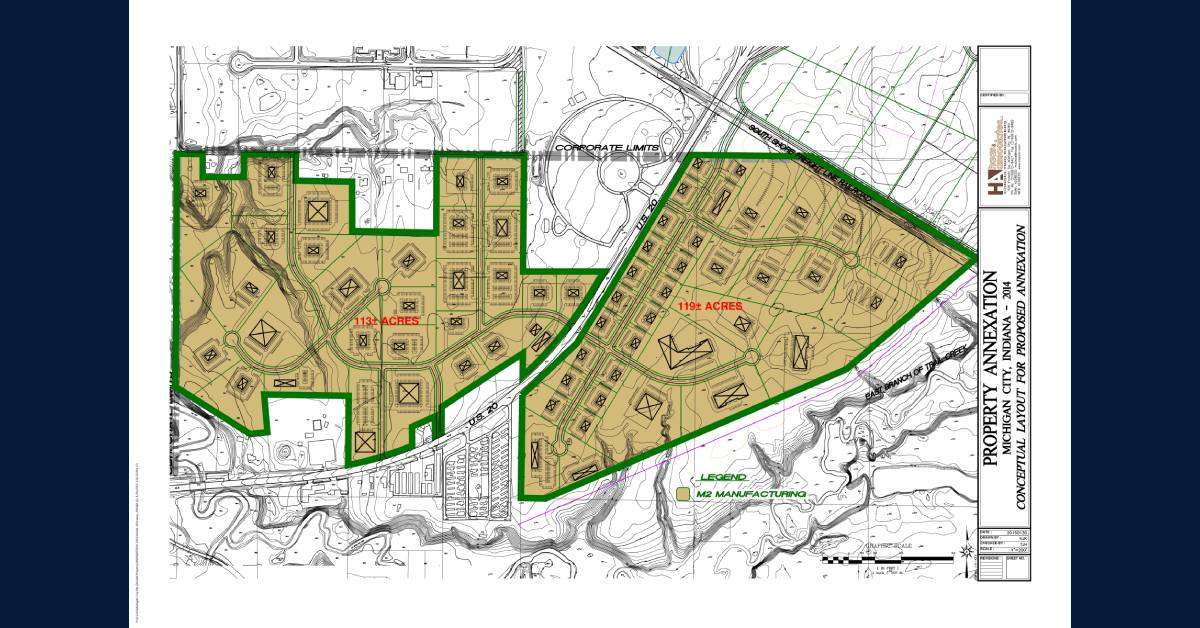 When you think of cities growing, you usually think about population, but Michigan City recently expanded its land, annexing 425 acres for future development.

Running along U.S. Highways 35 and 20, as well as I-94, the area is located right next door to the city and will serve as a hub for manufacturing, logistics, and residential development for years to come. Clarence Hulse, Executive Director for the Economic Development Corporation of Michigan City, noted that the current plans are to convert roughly 300 acres into an industrial park, and 100 acres into new residential subdivisions.

“We’re now in the process of planning what those acres could look like,” said Hulse. “It’s a big opportunity for new capital investment in Michigan City, creating new jobs and new homes to attract new residents and even current residents looking for something new.”

Thanks to its proximity to nearby infrastructure such as Interstate 94 (within 1 mile), fiber network and rail, as well as a prime geographical location, the property is one of the most desirable development hotspots in the Midwest.

“This is one of the top areas in the United States for reaching the most population in the shortest amount of time,” said Roy Roelke, Cressy Commercial Real Estate Senior Broker. “That’s not just Chicago, that’s all of North America.”

Since the land is right next to the city’s existing territory, incorporating it into the city’s infrastructure network is fairly straightforward. For example, one of the most critical aspects of the annexation is that it means the area gains access to city services, such as sewer and water. It is all a part of what Hulse and the city call responsible annexation.

“We’re not trying to hopscotch or jump across the interstate, this expansion just made sense,” said Skyler York, Planning and Inspection Director for Michigan City. “The EDCMC  is always telling us that investors and businesses are requesting sites with 20 acres of land, and we didn’t really have anything like that laying around, but now we do! It’s nice to have a clean slate out there to really go after something that might be really worthwhile.”

The biggest and most reputable developers, manufacturers, along with transportation, distribution, logistics (TDL) companies,  always look for land that is already covered under a city’s water and sewage networks. When you pair that security with the new annexation’s vast tracts of land, you quickly draw interest from a range of site selectors and prospective developers.

“We’ve had four different site visits in the past four months, three of which were national site selectors looking to locate large industrial companies and manufacturers,” Hulse said. “this is truly an exciting time for us, and the culmination of a long road, about 15 years since it all got started. It’s going to create a whole lot of opportunities for growth here in Michigan City.”

To learn more about the Economic Development Corporation of Michigan City, visit them at www.edcmc.com.