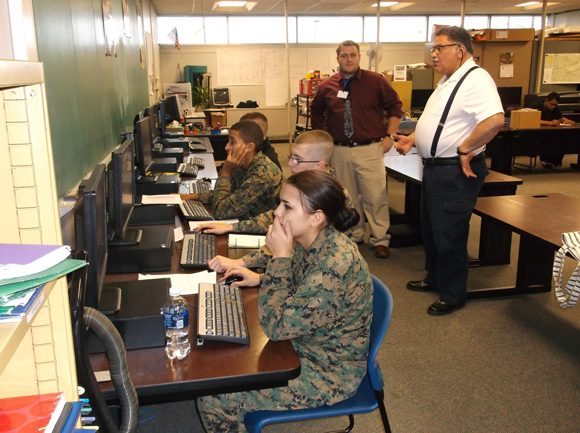 The day after the Director of the Federal Bureau of Investigation, James Comey, testified before Congress that cyber attacks represent the most serious threat to homeland security, cadets from the Michigan City High School (MCHS) Marine Corps Junior Reserve Officer Training Corps (MCJROTC) participated in Cyber Patriot, a national computer security competition, open to all public and private high schools in the United States.

Cadets “fought” fictional cyber hackers for six hours on the night of November 15th in a game that tests high school students’ ability to react to attacks on a computer network system. This was the first such competition for the MCJROTC, with MCHS being the only Duneland Athletic Conference school and one of the few schools in Indiana to participate.

The team of cadets junior 1st Lieutenant Alex Wyman, sophomore Sergeant Jalen Stockley, sophomore Corporal Thalyea Del Real, and freshman Private First Class Ben Boyd scored 80 out of a possible 100 points in the Windows Client phase and 15 out of 100 in the Windows Server phase. Wyman and Stockley had attended a Science, Technology, Engineering and Mathematics (STEM) camp during the summer at a technical high school near Boston last summer in preparation for this competition. The camp and the Cyber Patriot competition are conducted at no cost to the school district or the cadets. It is completely funded by the Marine Corps.

“We obviously need to improve in the Windows Server area, but I am very proud of the performance of our cadets, particularly for this being our initial experience with Cyber Patriot,” said Senior Marine Instructor Major Tom McGrath. “I am indebted to our two volunteer mentors, Mr. Ralph Gee and Mr. Yogi Torres, for the technical expertise they provided in our many practices leading up to the competition. Team Michigan City is not just a phrase- it really works here at the high school.”

Mr. Gee, the Technical Engineering instructor at MCHS, is an enthusiastic volunteer of the MCHS team, despite not having any prior exposure to Cyber Patriot. “The Cyber Patriot Team at MCHS is a great opportunity for students to learn about technology and the ever-growing interconnectedness of today’s world. It is simply not enough for students to be able to use technology but now a necessity for them to understand how technology works. Opportunities for students to learn these skills in the classroom and extra-curricular programs are critical for the future,” he said.

Mr. Torres, the Lead Computer Technician for Michigan City Area Schools and former Marine, was impressed that the MCJROTC goes well beyond teaching general military subjects. “These cadets are on a new and exciting venture of computer skills that will expand their horizons towards computer-related fields. This will benefit them in any military or civilian environment, providing them with the confidence to succeed in today’s growing technology opportunities.

First Lieutenant Wyman, the team captain, is anxious to compete in the 2nd round of Cyber Patriot on December 6th . “Although it is going to be tough doing a six hour competition on Friday night and getting back to the school at 3:30 the next morning for our Purdue drill meet, I really want to improve our score, particularly in the Windows Server,” he said.

The MCJROTC’s first drill competition will be Saturday, November 23rd, when they host 11 schools at Elston Middle School. In addition to military drill, there will also be competitive events in marksmanship, physical fitness, academics and personnel inspection. The competition is scheduled from 8:30 am to 3:30 pm. It is free and open to the public.