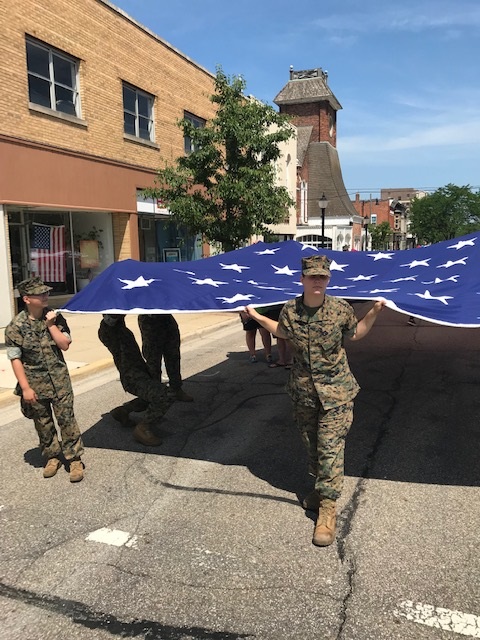 As most Americans were beaching, barbecuing, or watching fireworks during Independence Day week, the cadets of the Michigan City High School (MCHS) Marine Corps Junior Reserve Officer Training Corps (MCJROTC) were honoring our Nation by participating in two patriotic events.  They carried an oversized flag in the Michigan City Patriotic Parade on June 29 with the help of the Michigan City Police Department summer campers.  They also marched in the LaPorte Independence Day Parade on July 4th. Additionally in June, the cadets provided the Color Guard for the Indiana Volunteer Firefighters Association convention at the Blue Chip Casino in Michigan City and assisted the Salvation Army in a  fundraiser.

“This time of year is of course a big vacation period.  I admire our cadets for their unselfishness to participate in events that remind us that our country’s freedom is not something that we should take for granted,” said Senior Marine Instructor Major Tom McGrath.

Master Sergeant Jeff Benak, the Marine Instructor, commented on the patriotism of the cadets.  “Many people today say that kids don’t appreciate the sacrifices made by those who fought and died for our country.  They need to look at our cadets and the number of public affairs events in which they participate, reminding everyone of the great country in which we live.”  Last school year, the MCHS cadets participated in 45 events which involved their Color Guard.  Additionally, they were involved with 68 different community service activities.

Cadets have been working over the summer to improve their military drill skills for the upcoming year.  Four cadets will be attending a drill camp at Texas A&M University in College Station, Texas from July 7th-13th.  “ Our goal is to not only qualify for the Marine National Championship as we have done in the last two years, but to win it,” said McGrath.   The camp, to include the round-trip flight, will not cost MCHS or the cadets anything.  It is completely funded by the Marine Corps.  Additionally, three more cadets will attend a Senior Leadership Camp in Boswell, PA from July 21st-28th.  Similarly, this camp is also fully funded by the Marine Corps.

The capstone event for the cadets’ summer activities will be to assist in the preparation and running of the Back-To-School Rally on August 8th.  This is an opportunity for Michigan City Area School students to obtain free school supplies donated by generous stores In Michigan City.