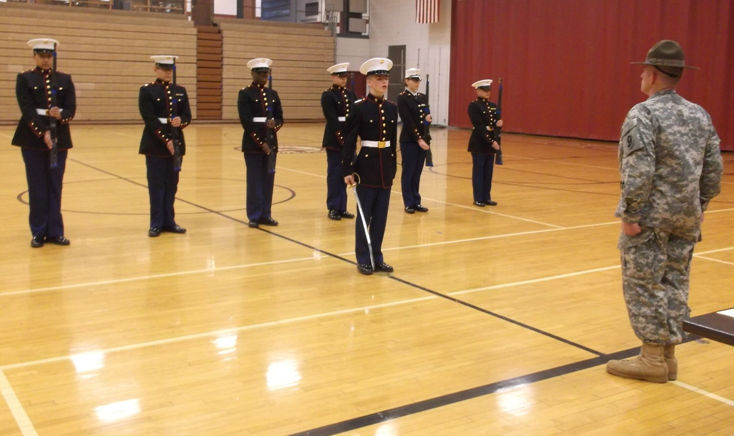 The Michigan City High School (MCHS) Marine Corps Junior Reserve Officer Training Corps (MCJROTC) Drill and Rifle Teams competed in a military skills competition at Concordia High School in Ft. Wayne, IN on Saturday, March 22nd. Ten other schools from Ohio, Kentucky, Illinois as well as Indiana competed in the meet. Most of the events were close order drill. They included armed and unarmed basic squad drill, color guard, and armed exhibition (“fancy”) drill. Prior to both squad events, the cadets went through a personnel inspection. The MCJROTC rifle team also competed in a rifle match.

Major Tom McGrath, the Senior Marine Instructor, spoke highly of the cadets’ flexibility and enthusiasm for military drill competitions after the meet. “We were originally scheduled to compete at another high school that Saturday, but that school cancelled a week before the meet. I contacted Concordia, since our cadets had been working so hard to compete for the meet that was cancelled. Even though we only had one week to learn completely different drill routines, our cadets still stepped up to the challenge. And despite having to “turn on a dime” with a short preparation period, our cadets drilled very well, and our scores reflected that.” 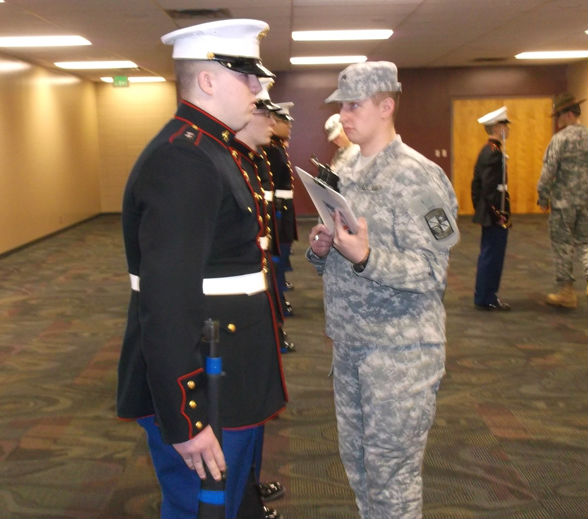 Concordia is an Army JROTC, and used a different scoring system unfamiliar to Michigan City. “This was the first Army JROTC meet that we have attended in my four years here,” said McGrath. “They incorporated the personnel inspection score and the commander’s evaluation, that was highly subjective, combined with the drill score, to produce the total points. So, despite high scores for drill, our total was lower primarily due to the commanders’ evaluation.”

After a busy March that included a number of community service projects, a command inspection, and the Concordia competition, the cadets will have more community service commitments prior to the end of the school year. They include the Comcast Cares city-wide project April 26th and the Danny Bruce Medal of Honor statue dedication on May 20th in Washington Park.

The cadets will then be attending three camps this summer- a Leadership Camp in Bloomington, Ind. and a Senior Leadership and Science, Technology, Engineering and Mathematics (STEM) camps in Wisconsin. These camps are conducted at no cost to Michigan City Area Schools or the cadets. They are funded primarily through the U.S. Marine Corps, with augmentation coming from the local chapter of the Marine Corps League and the MCJROTC Booster Club.