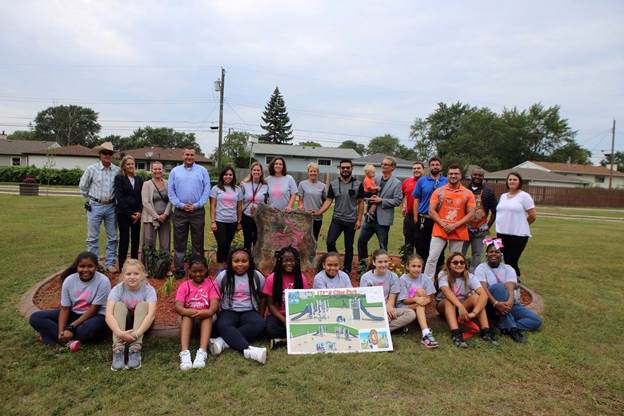 Hammond Mayor Thomas M. McDermott, Jr. has announced the ribbon cutting of the park at the corner of Cline Avenue and 173rd Street in Hammond.

This all came about when Amy Radolak with “Girls on the Run” from Hess School met with 6th District Councilman, Scott Rakos and Mark Heintz, Parks Superintendent , with their plans to clean up the park and plant some trees, flowers and plants adding that they would like a walking/jogging track. On April 22, Earth Day, Amy, the girls and residents came out in force to begin the cleaning and planting. A special thanks to all the area businesses who contributed time, food, supplies, monetary donations and raffle prizes.

“This area is currently known as No Name Park”, stated Mayor McDermott. “Today, it is officially named “Amy Park”. “Ms. Radolak has put in a lot of time and effort to get this park up and running. She deserves having it named after her.”

“One person’s vision doesn’t become a reality without a team, community, and families’ support” stated Amy Radolak. “My deepest gratitude to all that made this park possible.”

Future plans for the park include a playground area for the children and a Dog Park for our canine friends.

“The way we were able to bring all the resources that turned a little used field into a nice addition to the neighborhood was very gratifying,” stated 6th District Councilman Scott Rakos. “The experience of being a part of a project like this one shows me that working together can make a difference in our community.”