By: Lubeznik Center for the Arts Last Updated: November 11, 2013 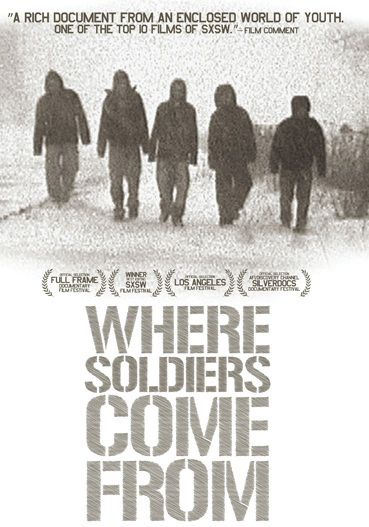 The Lubeznik Center for the Arts is presenting a screening of the award-winning documentary “Where Soldiers Come From,” Thursday, November 14th at 6:30 pm. Doors will open at 6:00 pm. The film maker, Heather Courtney, will be present to introduce her documentary and to host a Q&A session after the screening.

“Where Soldiers Come From” takes an intimate look at the young men who fight for our country, as well as the families and towns they come from. Heather Courtney returns to her hometown in the Upper Peninsula of Michigan to follow the journeys of 3 childhood friends from their quiet, snowy town to the mountains of Afghanistan and back. Over a span of 4 years Heather follows these young men from their beginnings in the National Guard, to active duty Soldiers fighting on foreign soil, to 23 year old veterans dealing with the challenges of the unseen wounds of war (Traumatic Brain Injury, and PTSD) while trying to integrate back into their families and communities. The film becomes a story about the war at home as well as the war in Afghanistan. Heather paints an intimate portrait not only of how war changes these young men, but also of how their absence, and subsequently their return, affects the loved ones that were left behind.

Heather Courtney is an Emmy award winning filmmaker based out of Austin, TX and Washington, DC. Her work on “Where Soldiers Come From” was awarded a 2012 News and Documentary Emmy, as well as the Independent Spirit Truer Than Fiction Award in that same year. The documentary has also won a Jury Award for Editing at the SXSW Film Festival, Best Documentary at the Philadelphia Film Festival, and the Founders Award for Best U.S. Documentary at Michael Moore’s Traverse City Film Festival. The film is a co-production of Quincy Hill Films and ITVS, in association with American Documentary | POV. Its national broadcast premiere was on the award-winning PBS documentary series POV in fall 2011, and was chosen for an encore broadcast in September 2012.