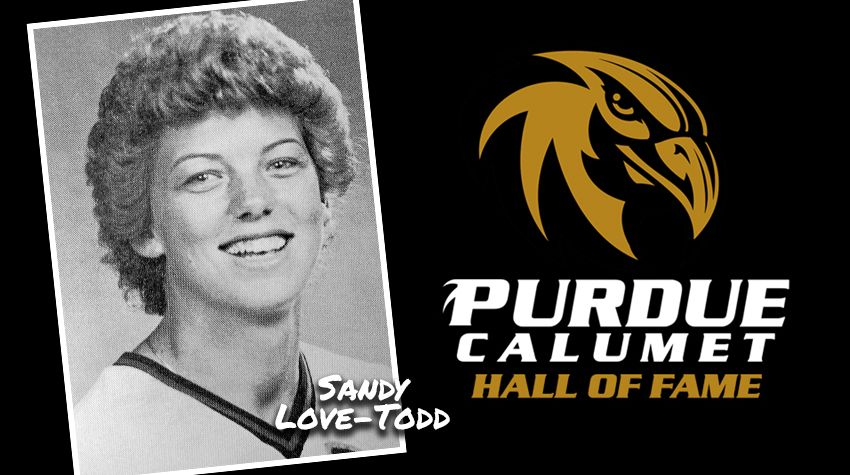 Sandy Love-Todd might not have considered herself a collegiate basketball player, at least not right away.

Before she helped the newly formed Purdue University Calumet women’s basketball program establish itself as one of the best in the region, she actually went elsewhere on a volleyball scholarship.

Former Lakers coach Bill Platt knew right away, however, that when she walked into the gym for basketball tryouts back in 1980– after the whole volleyball thing didn’t work out -- he sensed she could become a special player.

But she wasn’t there yet.

“She was better than what we had, but she wasn’t anything special when she came in,” Platt said of Love-Todd. “I knew right away though, that she was a very good athlete. She had an outstanding jump shot.

“But she was very competitive – I’m thinking then, this is someone we can build on for the future.”

It proved to be Love-Todd’s work ethic and internal drive that made her one of the best to play Purdue Calumet basketball.

Love-Todd will be inducted into the school’s Athletic Hall of Fame on Saturday, Feb. 6, with former PUC men’s basketball standout Scott Sparks, in a special ceremony at halftime of the 3 p.m. Purdue Calumet/Indiana South Bend men’s basketball contest in the Fitness and Recreation Center.

Love-Todd, who passed away after a two-year battle with brain cancer last spring, will also be Purdue Calumet’s first posthumous inductee.

“She was pretty modest,” Love-Todd’s husband of 19 and half years, Jim Todd, said of his wife’s take on her basketball career at Purdue Calumet, which spanned from 1980-1984.

“She always felt that that she was not a great shooter, but I think she was – she just really enjoyed the game. If we did anything athletically (as a family) she was always competitive. I think her playing organized basketball just brought out more of that competitiveness.”

According to Platt, who coached the Lakers from 1980-85 – a year after the program began in 1979 and the team finished 7-8 – Love-Todd had to work to become the player she was.

In her freshman season, the Lakers finished 8-12 overall and Love-Todd, who had transferred into Purdue Calumet at spring semester, averaged just 5.3 points per contest, finished with 53 total points and played in just 10 games. It the was the arrival of teammate-to-be Vernell Jackson – who later went on to become an NAIA All-American in 1982-83 – that pushed the Merrillville High product to be her best.

“(Vernell) came in to tryouts the following year and we could tell right away that she was going to be special, and Sandy saw that too,” Platt said. “Sandy was competitive, and it was like she said, ‘Well I want to be good enough to play with her,’ so she really started working on her game and made great strides.

“She worked hard and she improved across the board every year.”

The 1-2 punch of Love-Todd and Jackson helped lead the program to a 19-5 record and AIAW Division II title in 1981-82, a 16-7 mark and NAIA District 21 runner-up finish in 1982-83, and a 15-10 record in 1983-84. Love-Todd, who didn’t have the 3-point line to utilize, improved her scoring presence as well, finishing her career with 1,046 points, which was then the most-ever in program history. She averaged 17.5 points per game her junior season – the same year she was named to the NAIA All-District First Team – followed by 16.5 points per contest in her senior campaign.

“Sandy was kind of the standard…She was the type of kid Purdue Calumet really needed,” Platt added.

“She embraced Purdue Calumet, it was her school, she wanted to get her degree there and she was all about that. She was a joy to coach – she worked hard in practice, played hard in games and really wanted to win.”

The competiveness transferred into the coaching world, where Love-Todd had quite the run as an Illinois prep coach, first at Rich South, leading the team a third-place finish in Class AA in 1990-91, followed by an elite eight appearance in 1991-92. In 1993, she moved to Homewood-Flossmoor, where she spent 22 years as a physical education teacher and coached the Vikings to the school’s first Class AA state appearance in 1996-97, which was also her final season as a high school coach.

“When she had (our daughter) Erin, it was her last year of coaching – she wanted to have time to raise a family,” Jim Todd said. “The year she was pregnant with Erin, she had her, and then they went down to state. Erin was sitting on my lap at one-month old at the state tournament,” he added with a laugh.

As a coach, she was “tough, but firm,” Jim Todd said of his wife, who would later go back to coaching in a different capacity: her kids.

Erin is now 19 and a freshman at Indiana, while the Todd’s youngest, Ashley, 15, attends Lake Central High.

“The girls really enjoyed playing for her.”

And of her induction into Purdue Calumet’s Hall of Fame? Jim Todd said Sandy would have been floored.