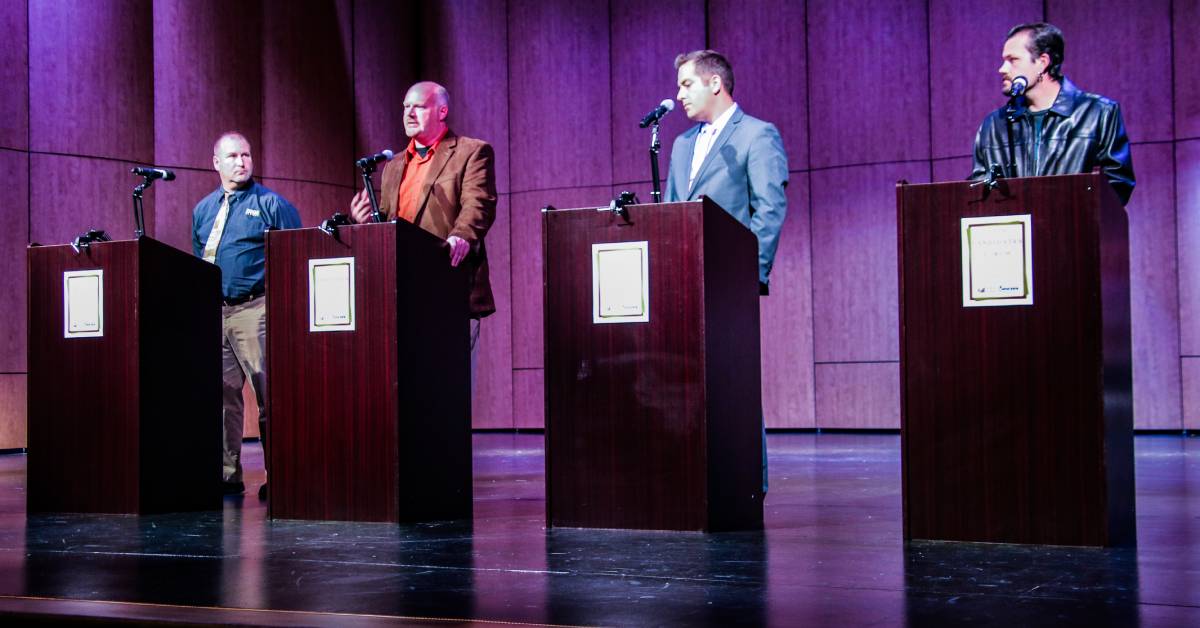 Ask any of the candidates running for municipal La Porte office in next month’s elections— the city is a wonderful place to live.

Whether they grew up in town or settled there more recently, every person on stage at Thursday night’s La Porte municipal Candidate Forum chose to plant deep roots in the city because it captured their hearts. The forum was hosted by La Porte Economic Advancement Partnership (LEAP), and the La Porte Jaycees, with support from the La Porte High School media program for the live Youtube stream on the Slicer Network.

LEAP Executive Director Bert Cook moderated the forum, where 14 of the 15 candidates on the November ballot spent the evening sharing their love for the city by discussing how they would make it better, if elected to serve.

The audience-submitted questions varied from race to race, but most fell into three main categories— reducing truck traffic through downtown, enforcing property maintenance codes, and improving the economy.

"A top priority is going to be to remove the truck traffic off Lincolnway, and that process begins on day one," said mayoral candidate Tom Dermody.

City Council 5th Ward candidates— financial advisor Sarah Brown and incumbent Miles Fettinger— debated the merits of a north/south bypass, one of the proposals to move trucks out of downtown.

Brown cited the wear on city infrastructure and detrimental impact on the downtown atmosphere as reasons she would be willing to consider the bypass.

"I think removing the truck traffic out of downtown could be a positive thing for La Porte," she said. "That's something I definitely would be interested in taking a look into."

Schmitt said quality of life is the most important issue facing the city.

"What we need in this town is good-paying jobs," he said. "What happens is people graduate from La Porte High School and move away because there's nothing to do in this town."

According to West-Schroeder, code enforcement is La Porte's biggest problem because of the visual impact it has on the city's image.

"I think it's very important that our residents and our landlords are held to a higher standard and their areas [should be] presentable," she said.

"I think if we could clean up some of the neighborhoods where there [are] problems, it would help overall," Kirkham said.

"I think it's important [to connect] government community engagement with a sense of pride in our community [and] a sense of help," Cutler said. "I think the government could reach out a little bit more in our day-to-day activities."

"We can try to provide some changes to our ordinances, changes to our design standards, help reduce some of those hurdles and costs [for businesses] to come in," Vincent said.

"If we can focus on investing in our people, teaching people skills, and having them ready to do jobs like CNC machining," he said, "it's going to become more attractive to big employers."

Mrozinske emphasized the need for a strong social foundation upon which to build new opportunities.

"From the council's standpoint, we are to provide the infrastructure and a community conducive for development to grow," he said.

Removing barriers and simplifying the process of opening new shops in the city is where O'Donnell would focus the council's efforts.

"Whether they be a mom-and-pop shop or a major corporation, if we can make things easier, more effective, and less costly for them, we can easily bring in a lot more businesses," he said.

She emphasized her belief that doing the job well requires a dedication to transparency on top of financial understanding.

"My whole career, I've always had an open-door policy. Accessibility and availability is important to me," Parthun said.

"We have a lot of outstanding candidates that are running for office, and I know that I for one appreciate you taking the time out of your evening to come here and learn a little about us," Machek-Feikes said. "In education, we grow."

"I look forward to another four years of service to the people in the town that I love so much," she concluded.

A full video recording of Thursday’s forum, hosted by LEAP and the La Porte Jaycees, is available on the LaPorte Slicer Network YouTube channel.

For more information on how to get ready to cast your ballots, check out the GreatNews.Life civic engagement series here: https://laportecounty.life/article/civic-engagement-series-a-guide-to-casting-your-ballot-in-local-elections/

For more information about LEAP, visit them online at: https://www.laportepartnership.com/.

For more information or to get involved with the La Porte Jaycees, visit them online here: http://laportejaycees.org.