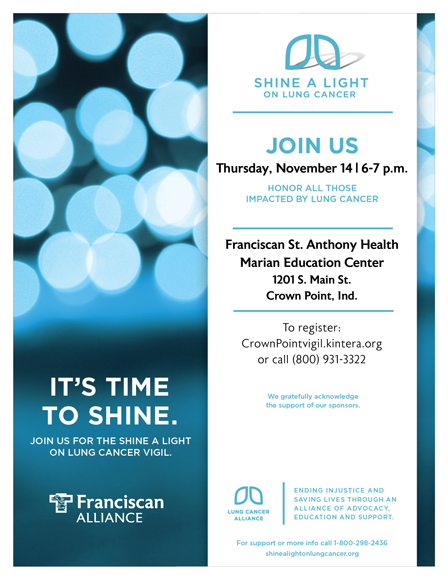 Franciscan St. Anthony Health – Crown Point will host a lighted vigil at The Marian Education Center as part of a national campaign to raise awareness for lung cancer on November 14 from 6-7p.m. Crown Point will join more than 90 communities across the nation in hosting a Shine a Light on Lung Cancer Vigil in partnership with Lung Cancer Alliance.

Shine a Light Lung Cancer Vigil is an annual event that occurs simultaneously nationwide. This year, communities in more than 30 states will participate in the event, which is designed to provide hope, support and compassion to the thousands who are diagnosed with lung caner.

This year’s Vigil in Crown Point will feature expert lung cancer speakers, Drs. Farhat, Rebesco and Jweied as well as a personal story of hope from a survivor and a moment of reflection from Father Tony Janik. Light refreshments will be served.

The Vigil began in 2005 in Boston and California and has since spread nationwide. As the only national non profit organization dedicated solely to providing support and advocacy for people living with or at risk for lung cancer, Lung Cancer Alliance and its community partners work together to create these events to help raise community awareness, advance early detection and research discoveries, support patients and their loved ones and work toward building governmental support.

For this first time this year, Lung Cancer Alliance is introducing a Facebook app that brings its Vigil into the digital space and allows for interaction and remembrance regardless of a person’s physical location. The Virtual Vigil app – which can be found at www.lungcancerstories.org – allows people to upload pictures and share stories of loved ones who have been lost to lung cancer or are still struggling with the disease. From there, the stories can be shared on personal pages or posted to another’s Facebook page.

About Lung Cancer Lung cancer kills more Americans than breast, colon and prostate cancers—combined. It is the leading cause of cancer death nationally and in Indiana. Nearly, 80 percent of those diagnosed with lung cancer are people who have never smoked or former smokers who quit decades ago. Today, there is scientific validation that screening those at high risk with low-dose CT scans can save tens of thousands of lives a year, and recently a government panel recommended lung cancer screenings for populations considered at high risk.

About the Franciscan St. Anthony Health – Crown Point Vigil
Franciscan Alliance has joined the war against lung cancer, the leading cause of cancer deaths in the U.S., through a potentially life-saving screening initiative that can uncover problems and lead to treatment.

This year, our event will include expert speakers in lung cancer, Drs. Farhat, Rebesco and Jweied, a personal story of hope from a survivor and moment of reflection by Father Tony Janik.

Additionally, Lung Cancer Alliance has partnered with the Lung Foundation of Australia and the Global Lung Cancer Coalition kicking off this global event in Sydney, Australia.

About Lung Cancer Alliance
Lung Cancer Alliance, www.lungcanceralliance.org, is committed to ending injustice and saving lives through an alliance of advocacy, education and support. LCA provides live, professional support, referral and information services for patients, their loved ones and those at risk for lung cancer; conducts national awareness campaigns; and advocates for multiple millions in public health dollars for lung cancer research.