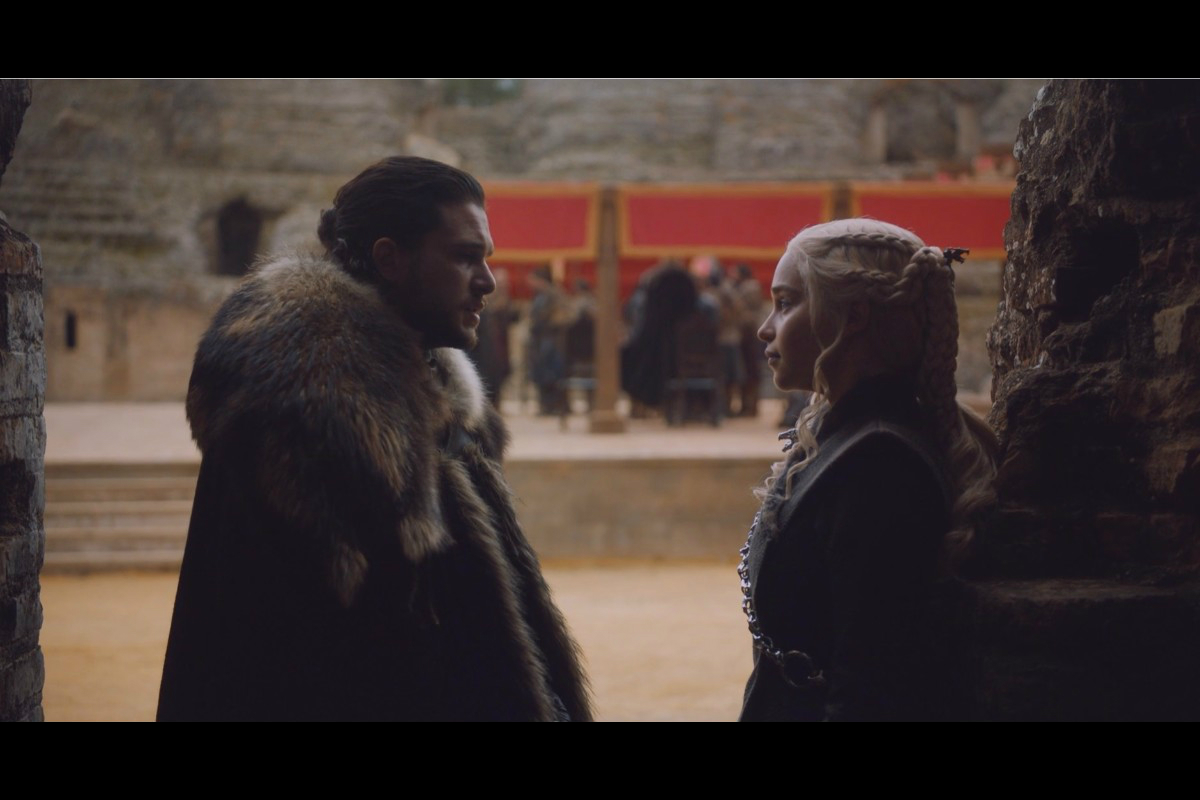 This was probably the most chock-full episodes of Game of Thrones we have ever seen with realities shattered, fan theories confirmed, and characters slain. Most viewers will have found their heads spinning after the episode was over and the dust had settled so let’s break this down in what will be the last #LifeonThrones for at least the next year (that hurts to say out loud) until the eighth and final season.

It began with the much awaited summit between the Great Powers of Westeros, in what was probably the closest this show has ever gotten to having all of its cast members in one place at the same time since season one when the cast was about a third of what it is now. 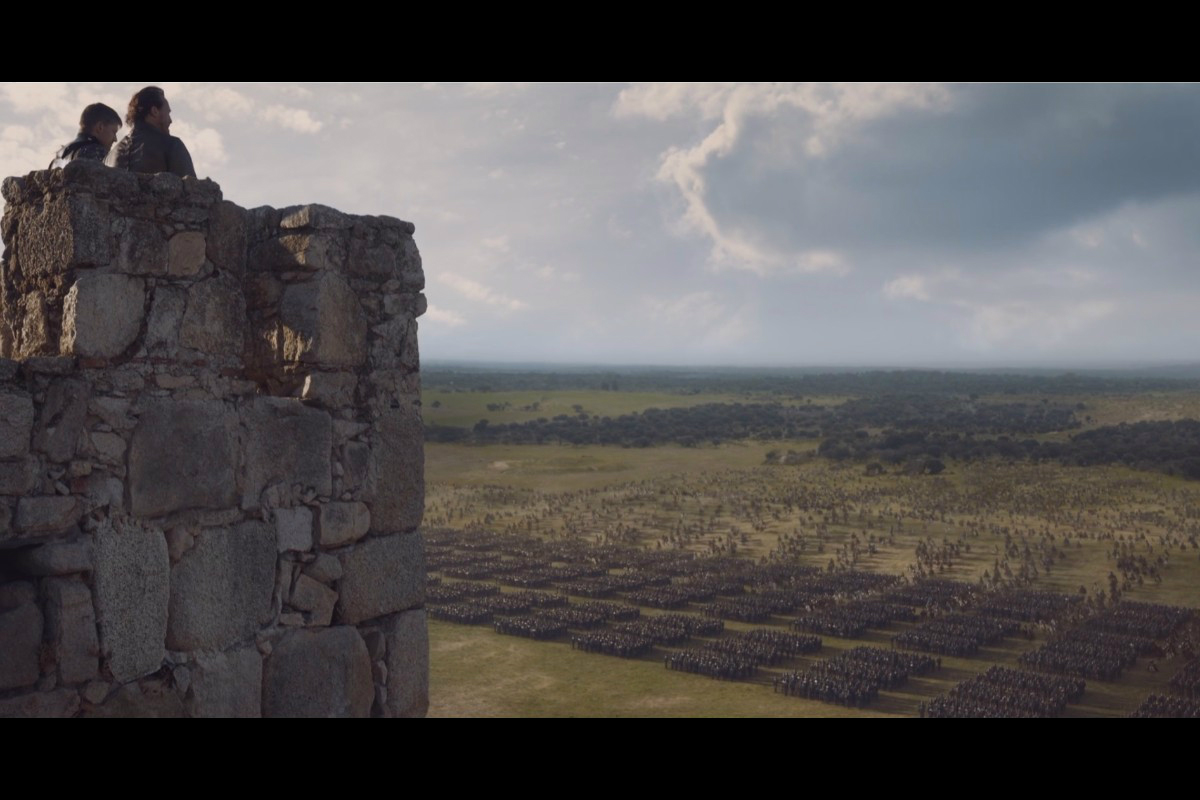 Cersei has Bronn and Jaime carrying out preparations in case things go south during negotiations while an absolutely massive army of Unsullied and Dothraki warriors assemble outside the walls. I don’t know where Daenerys gets enough food to feed these massive armies on tiny Dragonstone in winter, but that’s neither here nor there. Maybe they’re just really great at fishing. ¯_(ツ)_/¯

Cersei, as one would expect, prepares for the summit in the Dragon Pit by giving Ser Gregor the Not-Quite-Dead a prioritized list of who he should kill if a trap is sprung. Great way to start off, Cersei. 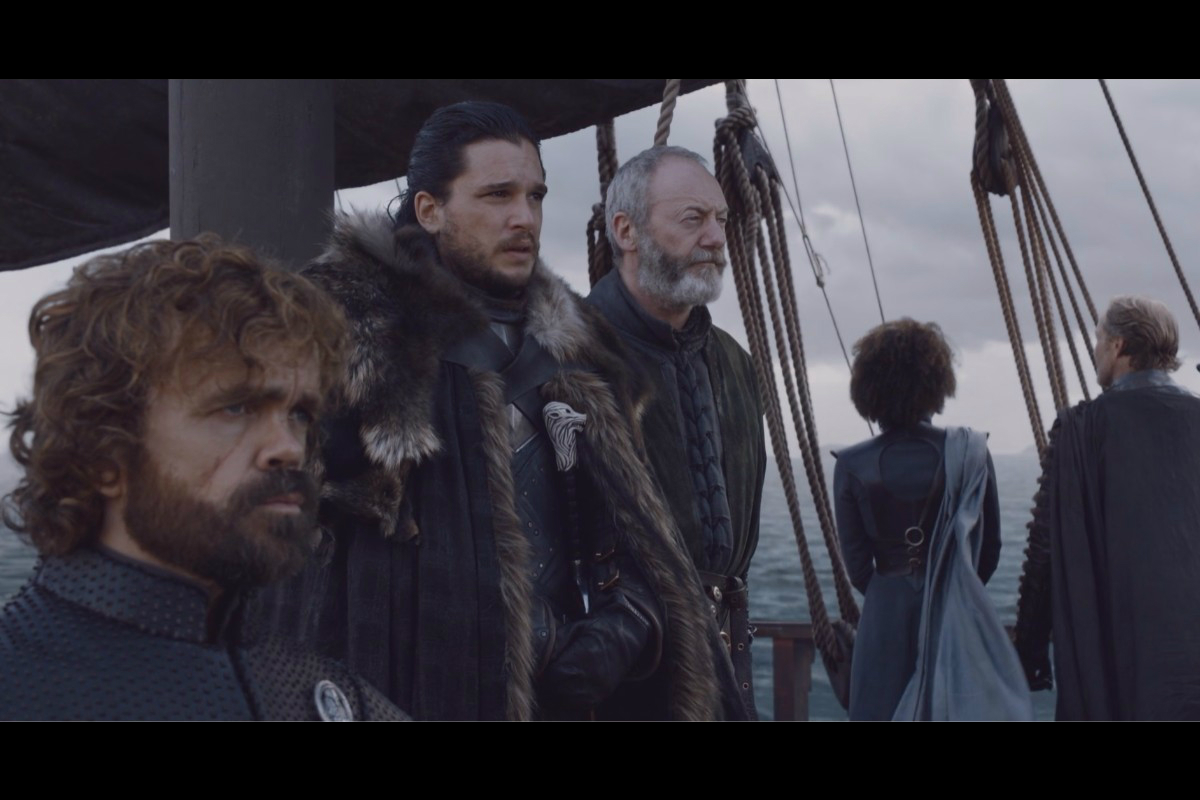 This season may as well be called the Game of Thrones family reunion, as we see at least a few per episode between characters who haven’t seen each other in ages, or who tried to kill each other when last they did.

Bronn and Tyrion reminisce on their old friendship now that they find themselves on opposing sides, and part of me really wants to think that Bronn is going to cross over to Daenerys, but he’ll stay wherever he thinks is most likely to get him his castle. The Heroes of Blackwater Bay, as Tyrion calls the group including himself, Bronn and Podrick; it is strange indeed the different paths they all took to survive over the years.

The Hound and Brienne reminisce about their attempt to kill each other to protect Arya, and sound somewhat strangely like proud parents here. Then there is the Hound’s less pleasant reunion with the brother, Gregor, who held his face down in a fire as a kid (what a silly prank) giving him the scarring on the right side of his face. Fans have been hoping for “CleganeBowl”, the legendary fight between the brothers, for years. Move you CleganeBowl hype clocks one minute closer to midnight. 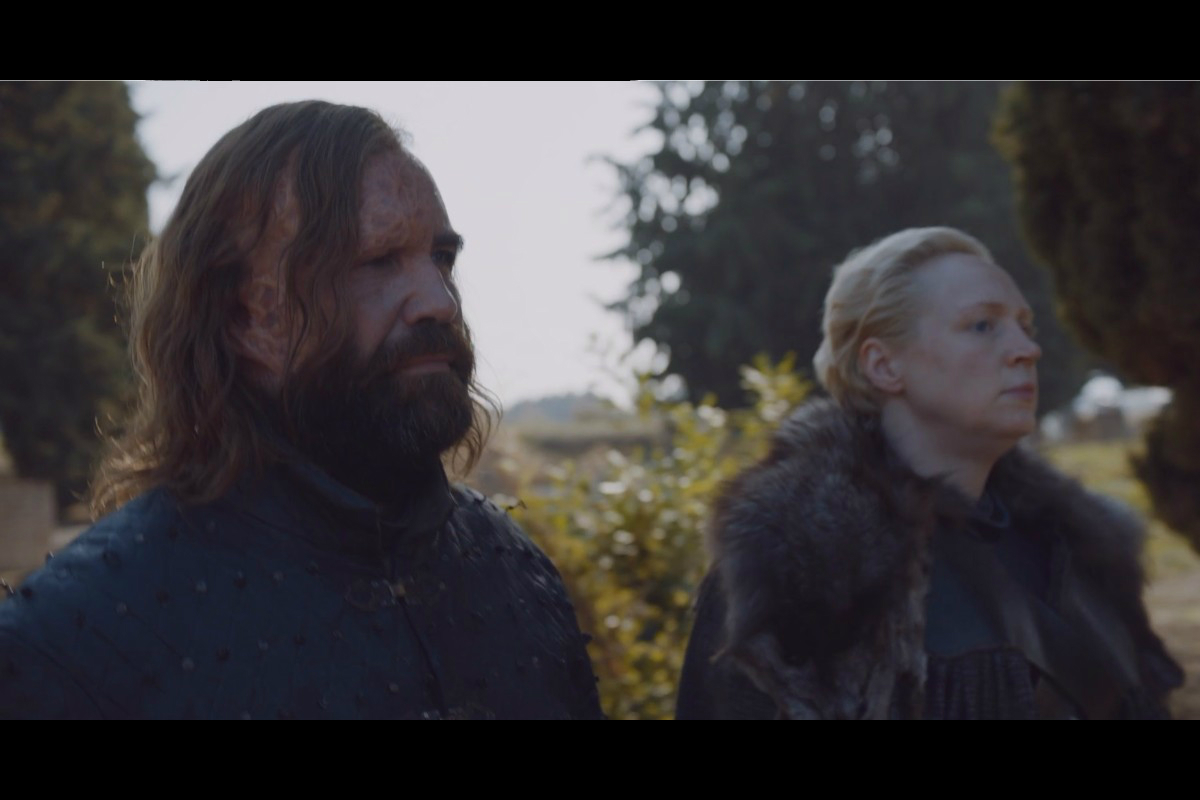 Daenerys makes her grand entrance on Drogon’s back, with a few power roars for good measure and negotiations are off!

Euron breaks protocol by monologue-ing at the start of the summit despite only having third or second tier character status at best. Sit down, Euron, your dwarf joke wasn’t even good, as Theon said.

Cersei doesn’t believe any of the talk of the Night’s King and the army of the dead, despite Jon’s reputation as the Honest Abe of Westeros, until the grand zombie unveiling. 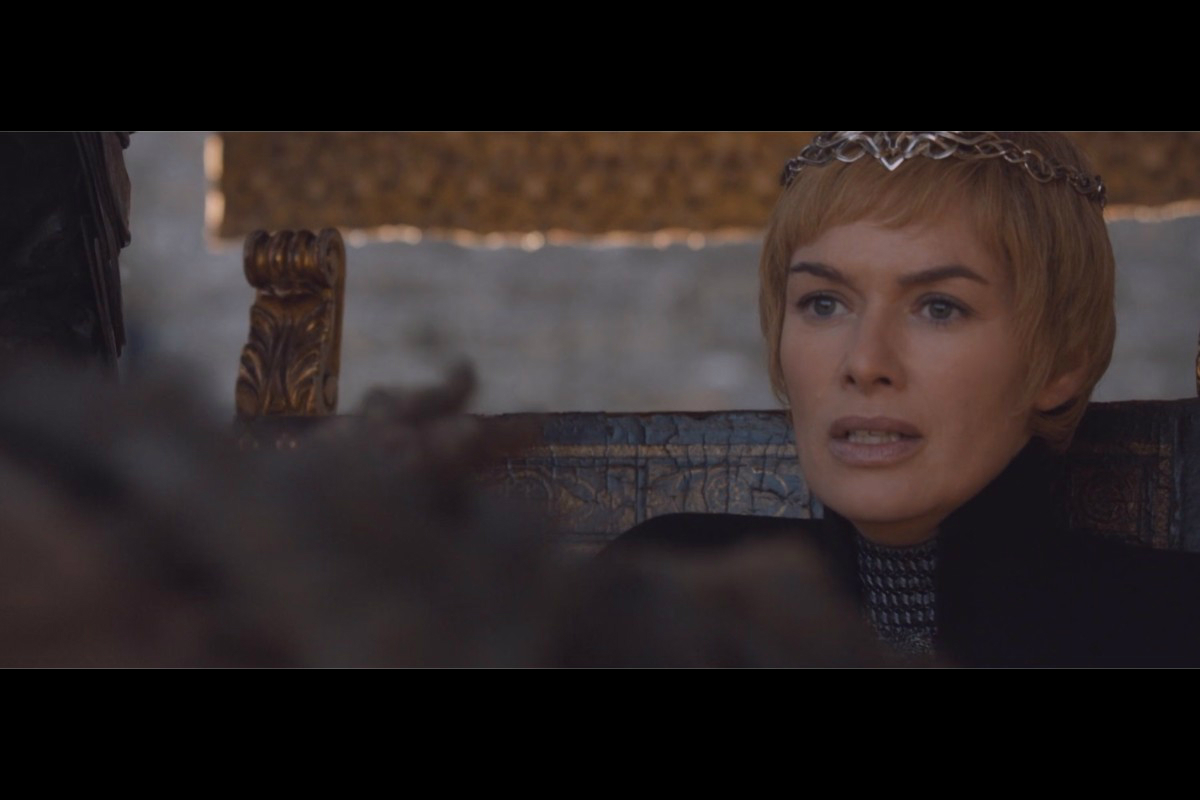 Then Cersei, for once, is utterly terrified and pledges to help them march north and fight the army of the dead. Hahaha, no, that was a lie of course because Cersei can’t just do something wise and good like sign a truce and help fight an enemy that wants to kill literally every living thing south of The Wall. Tyrion appears to get her to agree to go and Jaime even starts drawing up plans only to find that she was crossing her fingers the whole time. We learn that Euron’s fake retreat to the islands is also a ploy so Dany will let her guard down. This is why we can’t work together and have nice things. Because of the Cersei’s of the world. 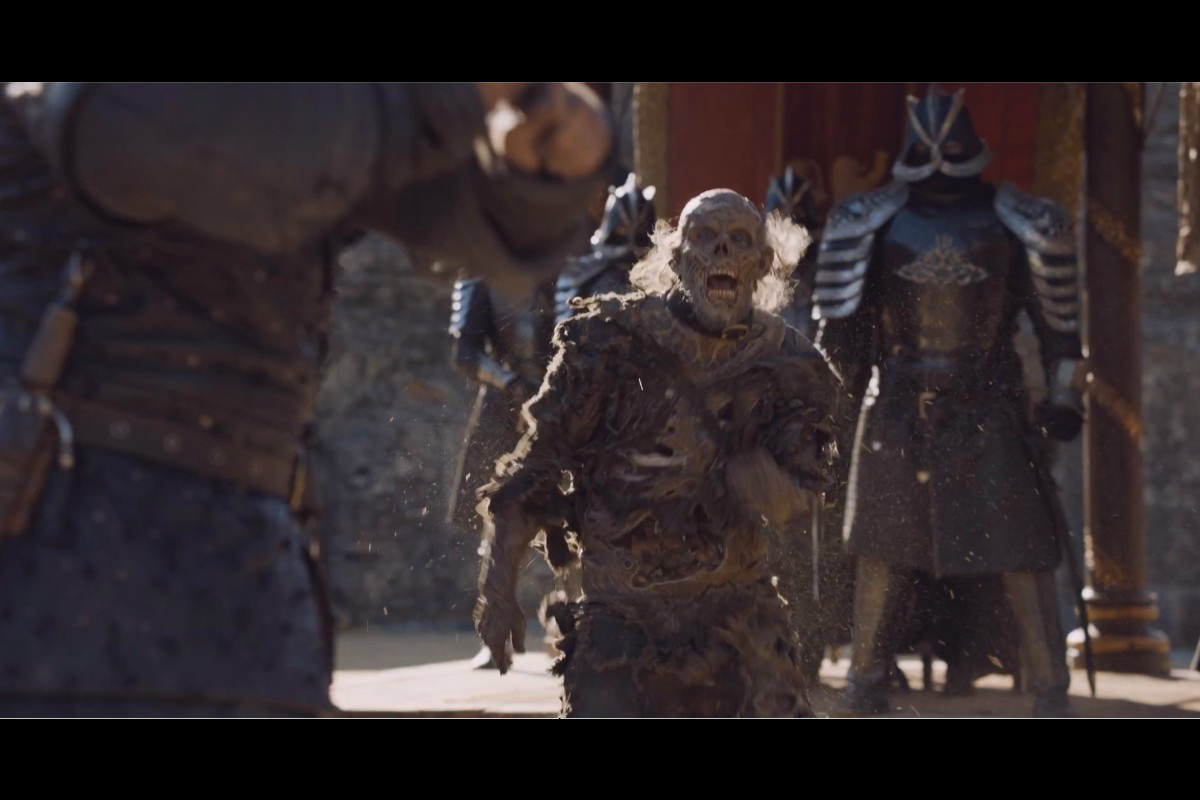 Then she makes a fatal mistake. She threatens to kill Jaime if he helps the Northerners and Daenerys fight the Night’s King. He calls her bluff and peaces out of King’s Landing; hopefully for good. I’ve been waiting for Jaime to choose his inner good over his deranged sister for years, now let’s hope he stick to it. As he leaves, he notices snow falling in the capital; an ominous foreboding of what is to come. Cersei is now pregnant and totally alone and isolated, aside from her undead Clegane bodyguard. Doesn’t look ideal for her. 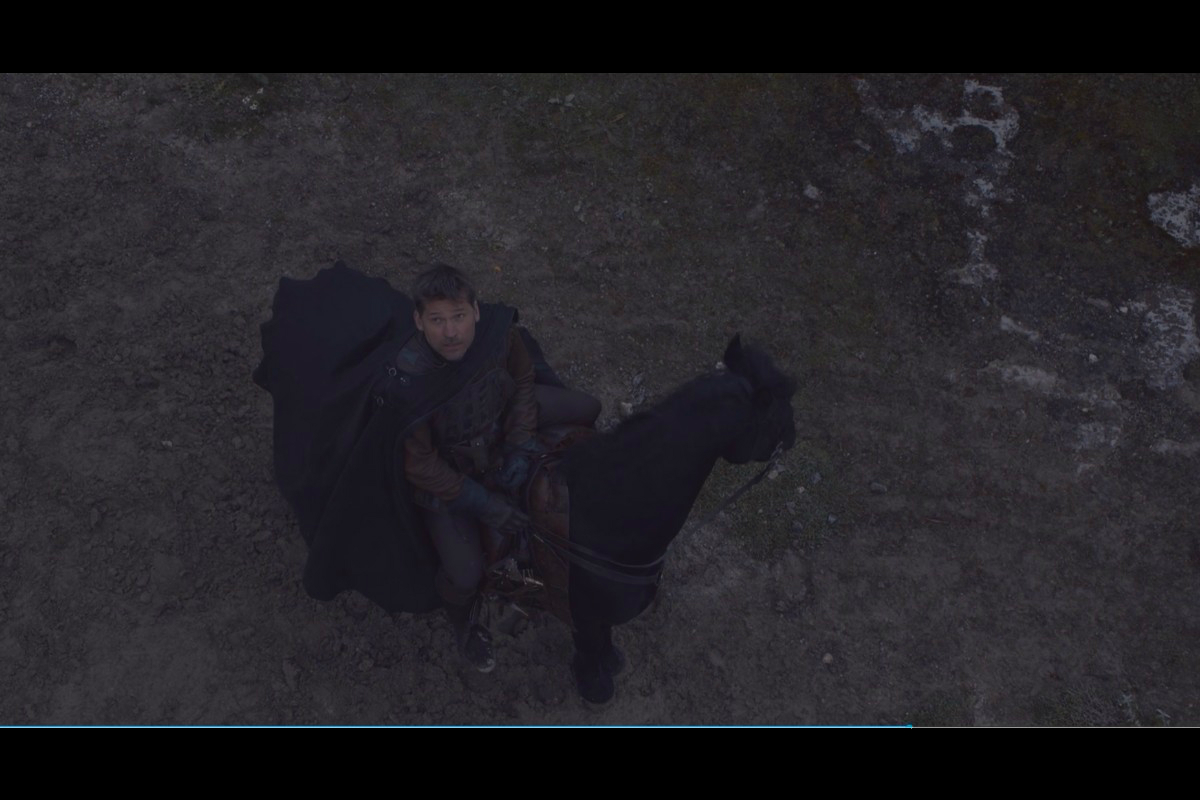 Meanwhile at Winterfell, it is revealed, FINALLY, that Sansa and Arya were indeed playing Littlefinger for a fool. This would have been infuriating if the sisters had really turned on each other so quickly, especially given that Sansa has seen his machinations in action for years now and should know better. In a beautiful instance of justice being served medium rare and sizzling, Littlefinger is confronted in what he thinks is Arya’s kangaroo court. Instead he is called out for his part in the betrayal of Ned Stark and the murder of Lysa Arryn, as well as framing Tyrion and oh yeah, getting Lysa to send the letter in season one that convinced Catelyn and Ned that the Lannisters poisoned Jon Arryn (the entire basis for the conflict between the Lannisters and Starks). As an aside, it seems likely that Bran has been spying on Littlefinger since he got to Winterfell, if you listen carefully you can hear ravens in the background of many seens Littlefinger is in, possibly spying on him. Finally there was someone he could not hide from. Mr. Three-Eyed Raven. 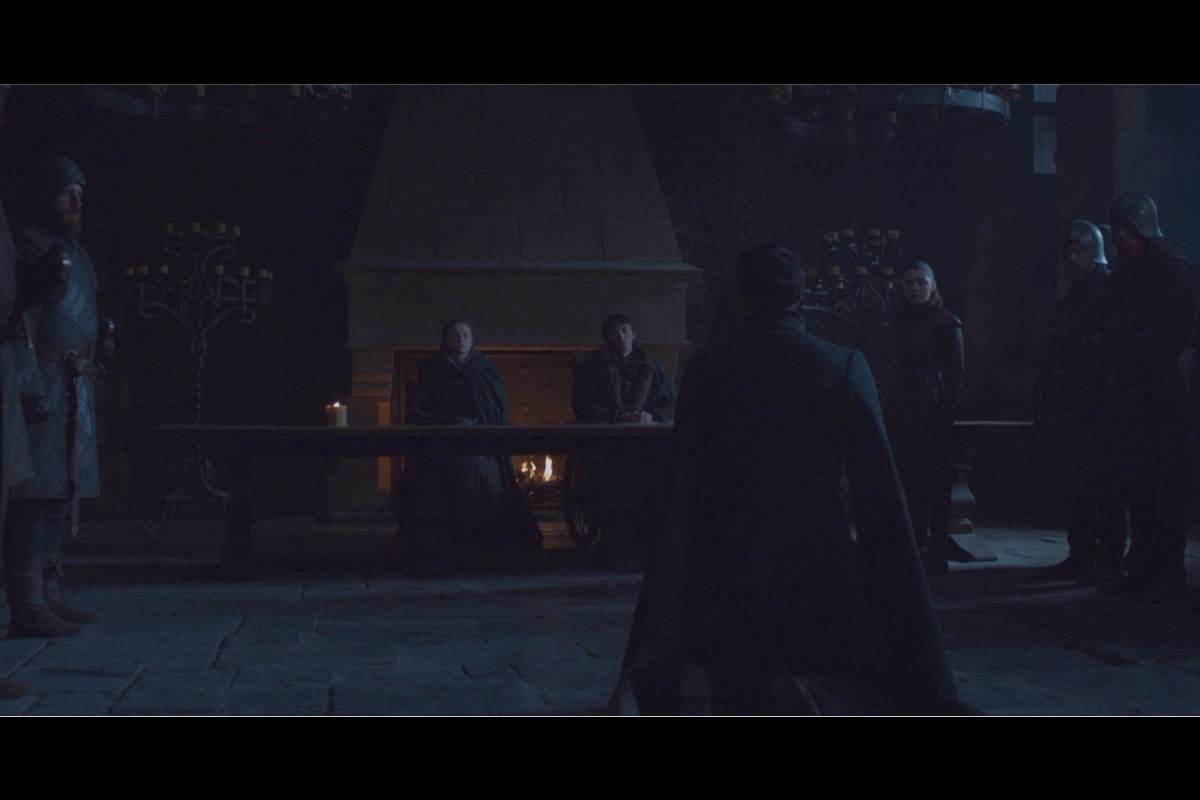 Thankfully Mr Three Eyed Raven, Bran, is present as a “witness” of all things space and time and offers testimony that Baelish held a knife to Ned Stark’s throat and said, “I did warn you not to trust me.” Finally those powers come to some use. Hodor did not die in vain. Arya carries out a swift justice as a groveling Littlefinger is summarily executed among an unsympathetic crowd. Guess that’s what happens when you plot and lie to everyone and are kind of a jerk your whole life.

There is also a touching moment between Theon and Jon, where Jon forgives Theon for the part he has played in the downfall of the Starks. Jon tells Theon that despite his betrayal of his foster father, he never lost the memory of Ned Stark; he may be dead and gone but he is a part of all the children he has raised. “You don’t have to choose; you’re a Greyjoy and a Stark,” says Jon. He gives Theon the extra gumption he has been missing to go and rescue his sister from Euron. Of course he has to kill a dude first, but isn’t that how most rescue missions start?

As the episode reached its climax, we finally got a resolution to that scroll Gilly was reading out to Sam in Oldtown that mentioned Rhaegar’s marriage annulment which has major implications for the future of Westeros. The fan theory, R + L = J Rhaegar Targaryen + Lyanna Stark = Jon Snow), has been around for years and to see it finally confirmed was truly amazing.

As Bran lays it out to Samwell Tarly and we get to witness in the flashback, Rhaegar (eldest son of the Mad King and brother of Daenerys) annulled his marriage to his Dornish wife and married Lyanna in a secret ceremony. The marriage was consummated and Lyanna would give birth to his son, that famous line, “Promise me, Ned,” was her begging her brother Ned to take care of her son, Jon Snow, or as he was supposed to be called, Aegon Targaryen. 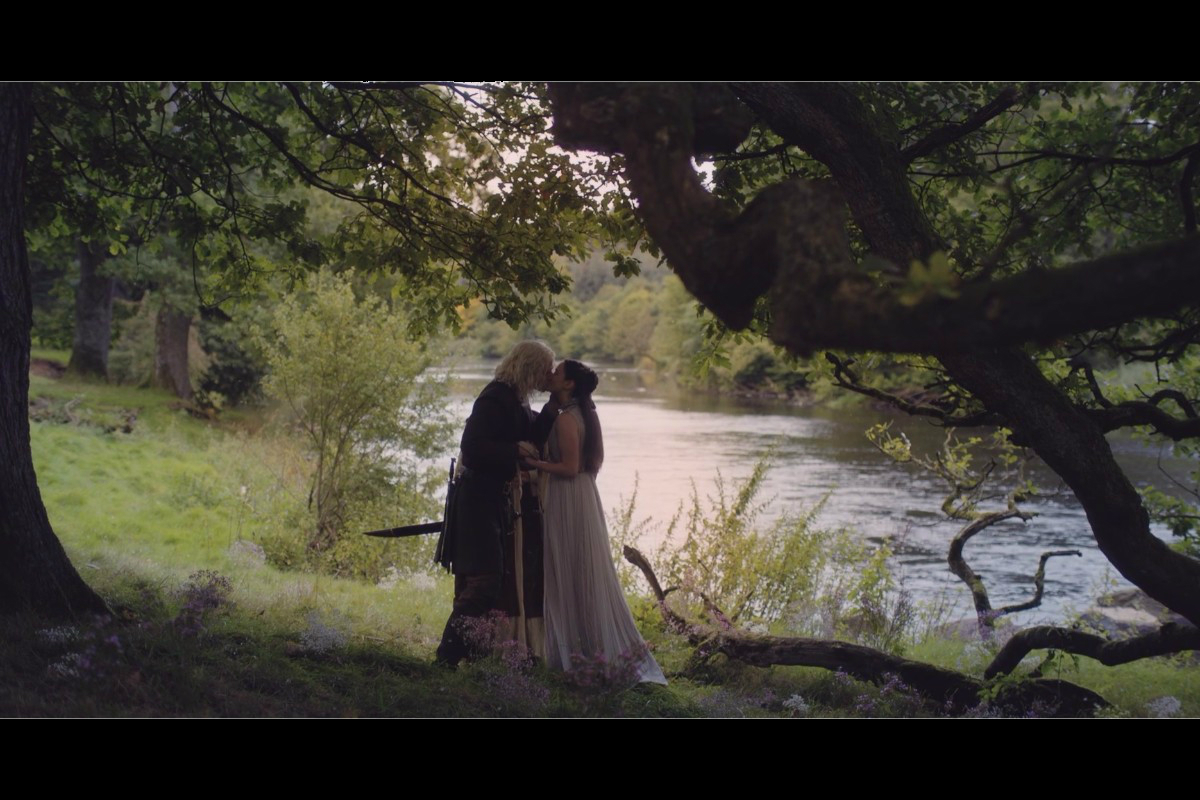 Rhaegar did not kidnap or rape Lyanna, who was betrothed to Robert Baratheon and is the supposed reason behind his rebellion. They were in love and were married by choice. Everything that set up the last few decades of the Game of Thrones world was based on a lie.

“He’s never been a bastard, he’s the heir to the Iron Throne.”

That quote from Bran still sends chills down my spine and probably will be one of the most memorable lines from the entire series.

What does this mean for Westeros? What does it mean for him and Dany, given that his claim is stronger than hers and he has just bent the knee to her? Complicating things is that fact that Dany and Jon er, Aegon, have a late night rendezvous of an adult nature, and yes, in case you haven’t figured it out yet; Daenerys is Jon’s aunt. Yes, this show likes to keep it in the family, so to speak. 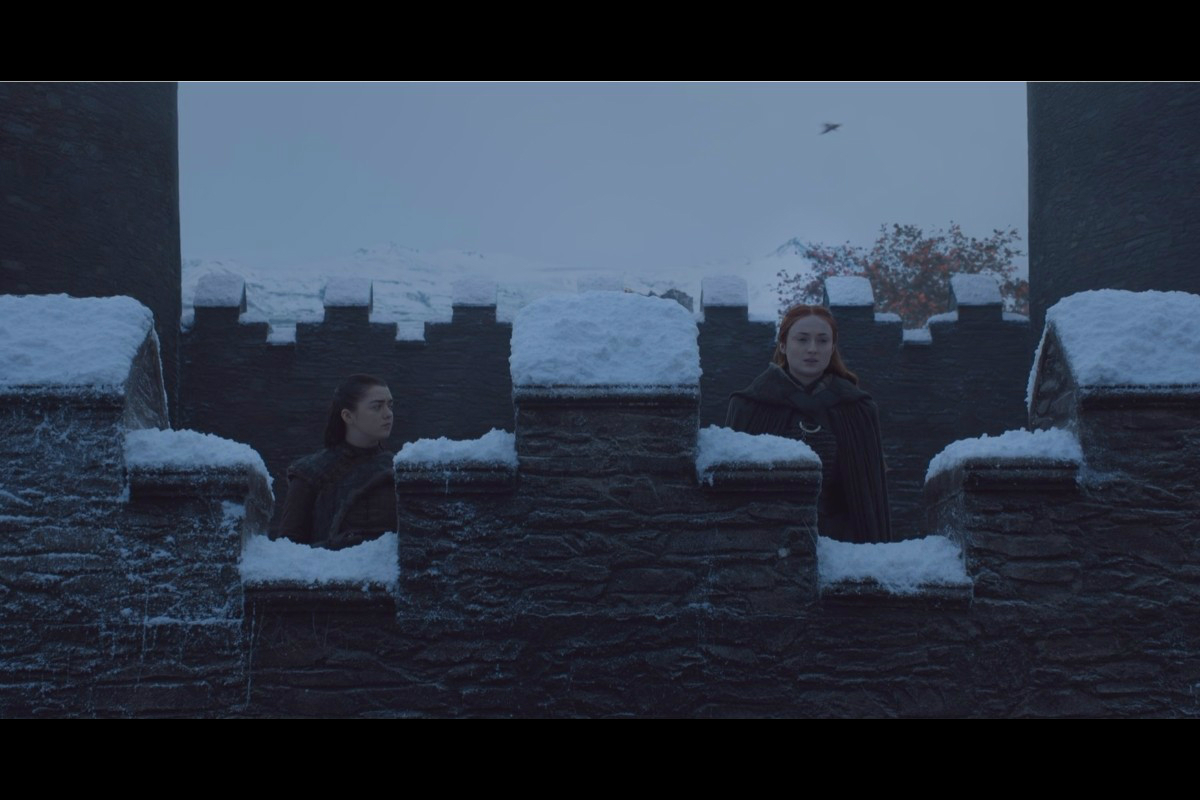 “The lone wolf died, but the pack survives,” Arya and Sansa reminisce as they think of their slain father in a moment of togetherness after some serious drama and Littlefinger Machiavellian insanity. This leads us further north as Bran, doing his glassy eyed seer thing, witnesses events about to transpire at The Wall through his ravens. 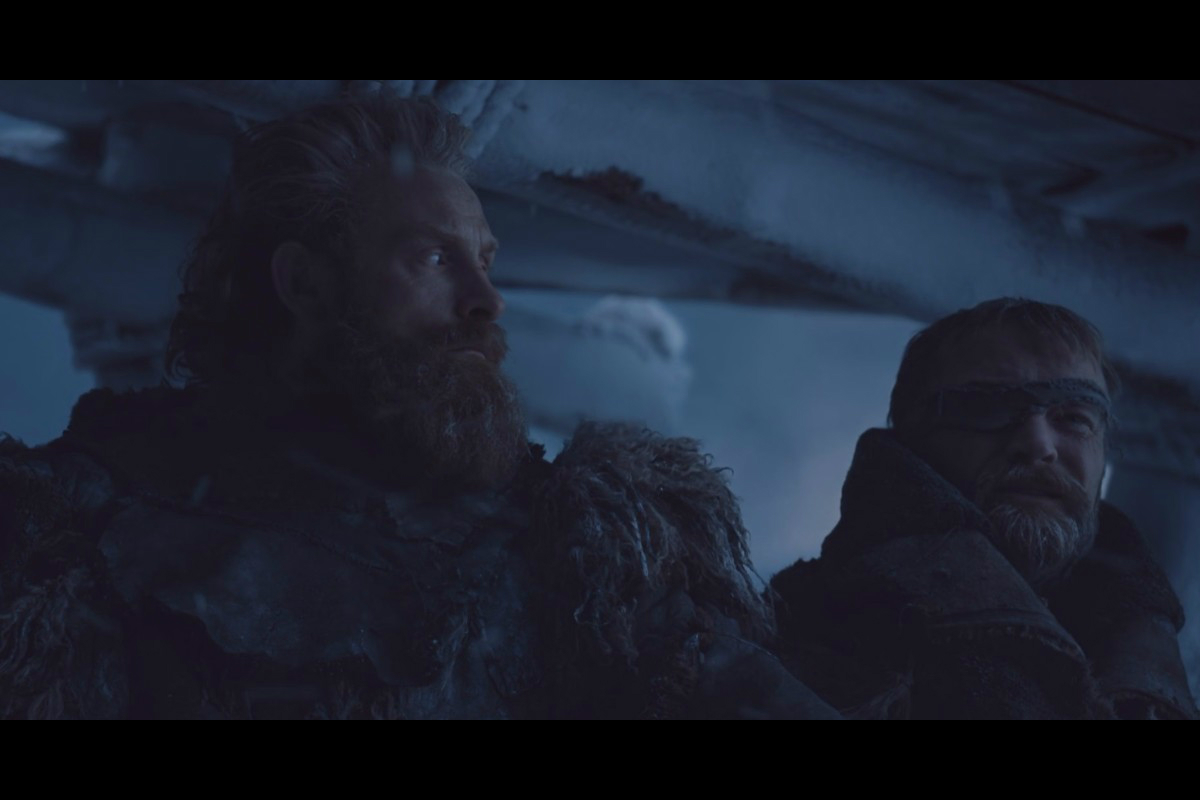 We see Tormund and Beric gazing down from the wall and I imagine the inner dialogue in their heads went something like this:

“Nothing there….still nothing….oh crap, WHITE WALKERS ON HORSES! Well, that’s not so bad, they haven’t been able to get through before and The Wall is magic so, oh no. Yeah, definitely forgot about the dead dragon. Well, life was nice while it lasted.” 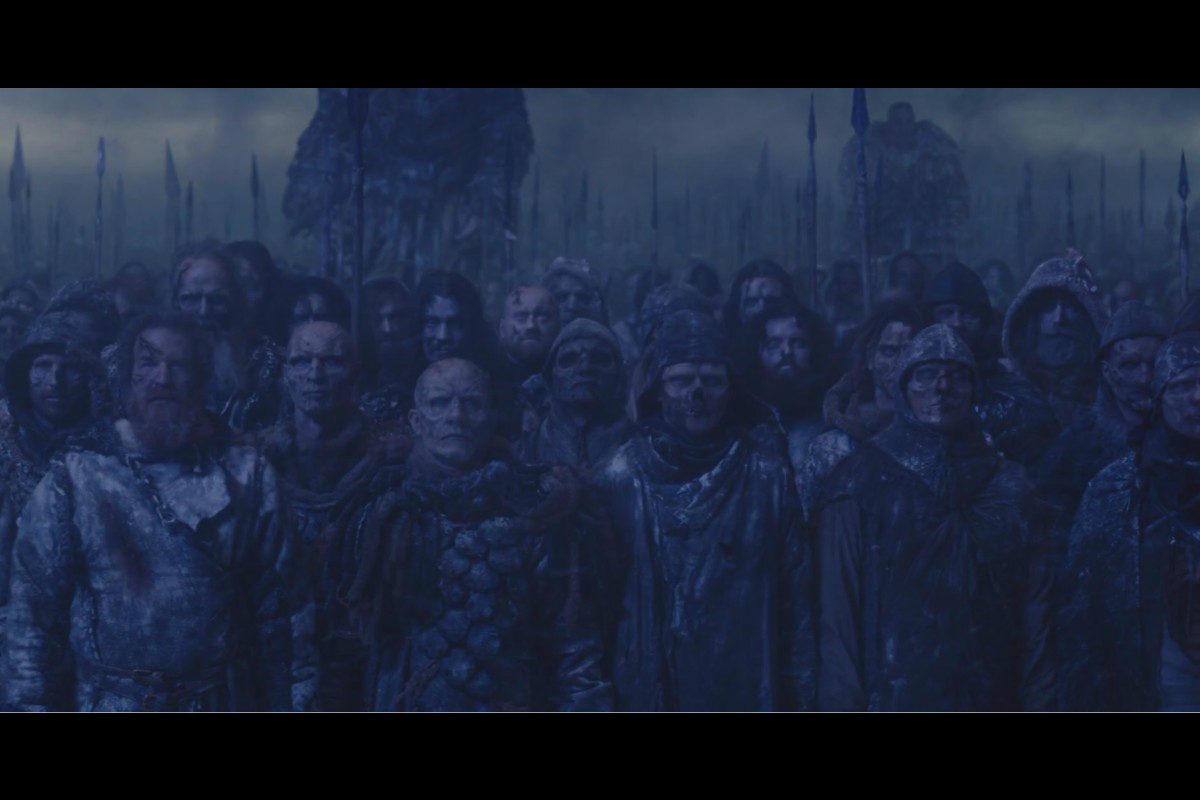 Queue Dream Team alumni Beric and Tormund screaming for everyone to run, WISE and indeed SAGE advice when an undead king with a face made of pure malice is riding a zombie dragon that spews flaming ice, a paradox so terrifying you will die from trying to work out how that’s possible if it doesn’t kill you first. 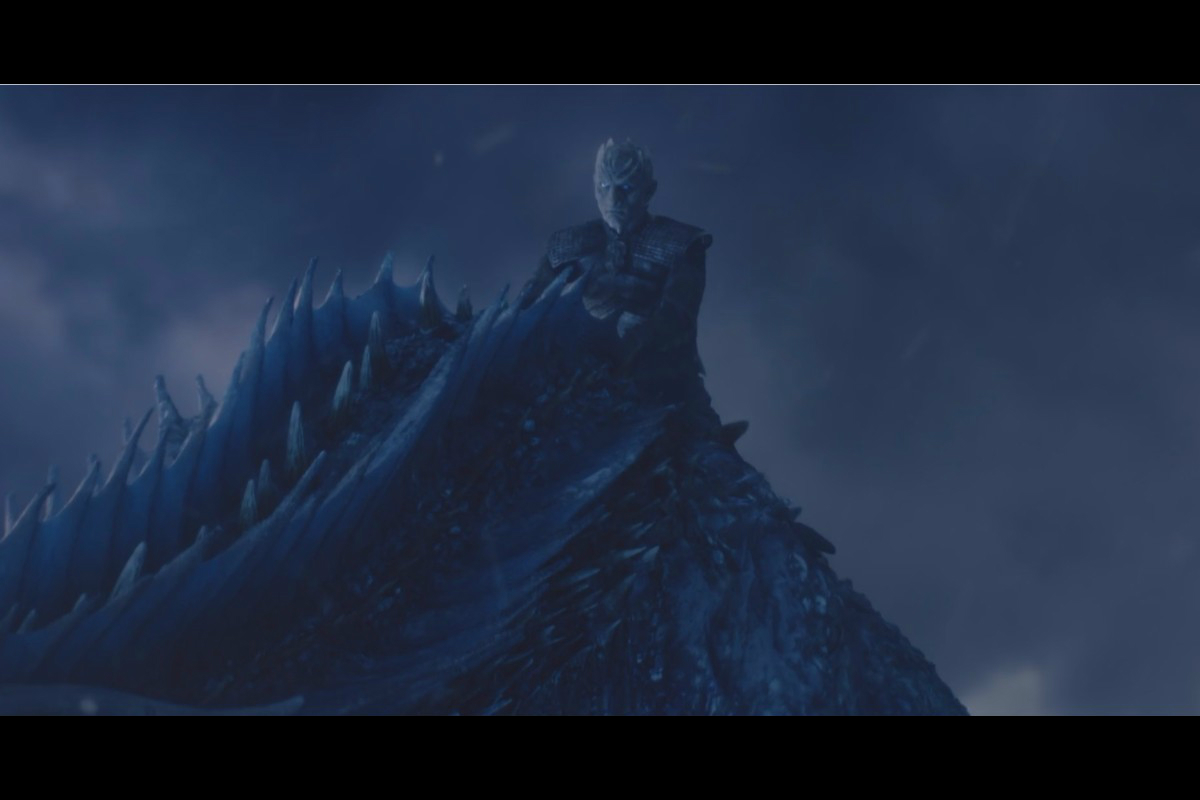 The next few minutes are just the Night’s King going on the joy ride of his life, bringing The Wall down with repeated flaming ice blasts that level the eastern side of it, allowing his army to march unhindered towards the North, Winterfell, King’s Landing, and just generally the land of the living. Well. All that Jon Snow inheritance stuff doesn’t seem like it will matter quite as much now, does it? I honestly have no clue what they are going to do to stop an army several hundred thousand strong, complete with giants, white walkers and a dragon. Build a new Wall at the Neck and write the North off? All I know is, Winterfell is not far off, so the Stark siblings had better get moving and hope Jon and Dany get there in time. 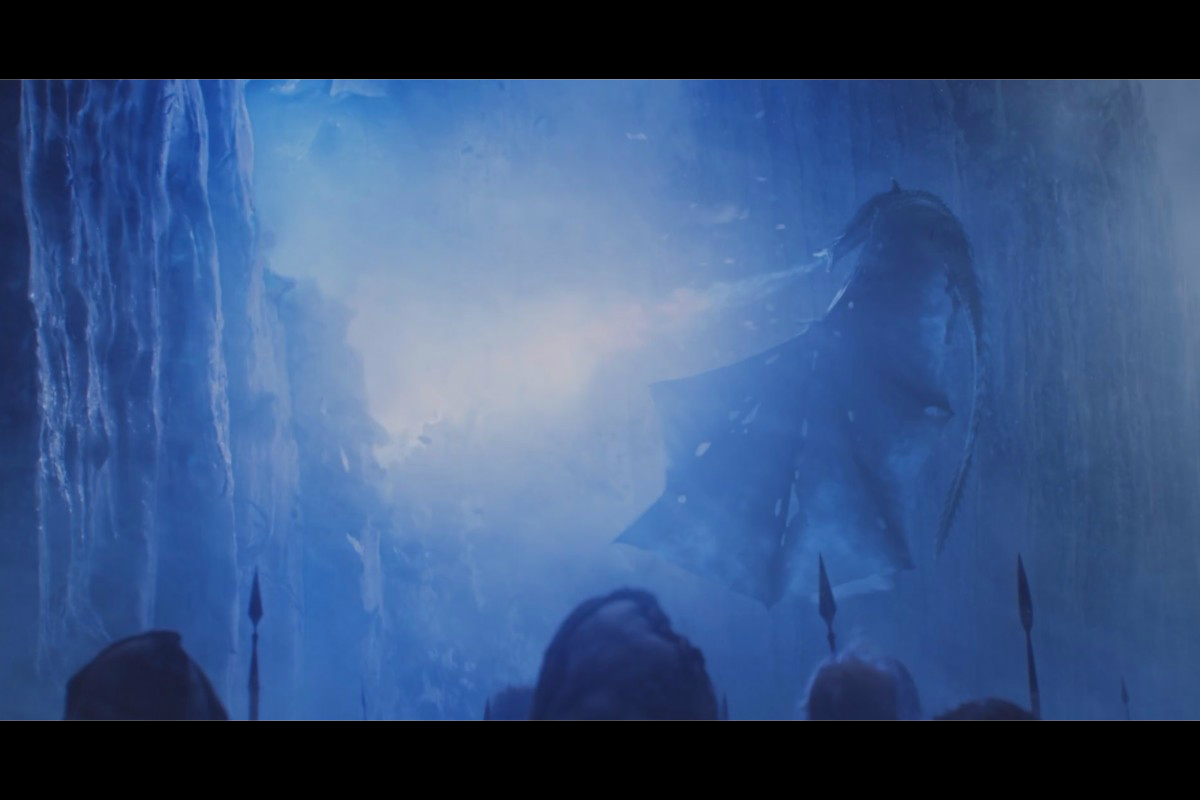