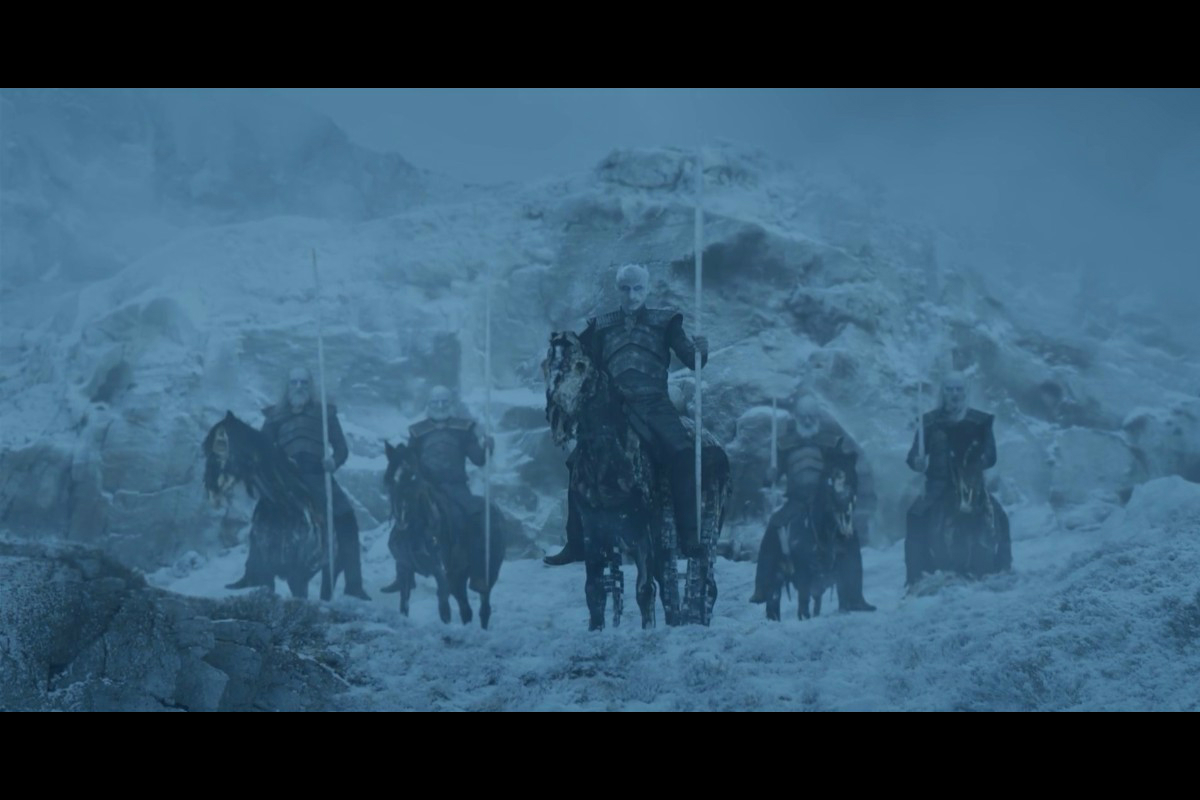 This week’s episode, if you’re anything like me, may have left you with some heart palpitations and stress dreams as its parting gift.

First we get to see the Dream Team make their way further into the belly of the beast, as the merry band of Jon Snow, Thoros, Beric, Jorah, Tormund and the Hound (along with a cast of some unnumbered zombie chow extras) search for a dead dude to take south with them. Tormund laments that very few heroes are smart as smart people would not do what they are, in fact, doing. I tend to agree with Tormund’s assessment. The entire time you are watching the scenes of the gang marching through the frigid death-filled realm Beyond the Wall, you find yourself thinking, there has got to be a better, much less stupid way of capturing a zombie. 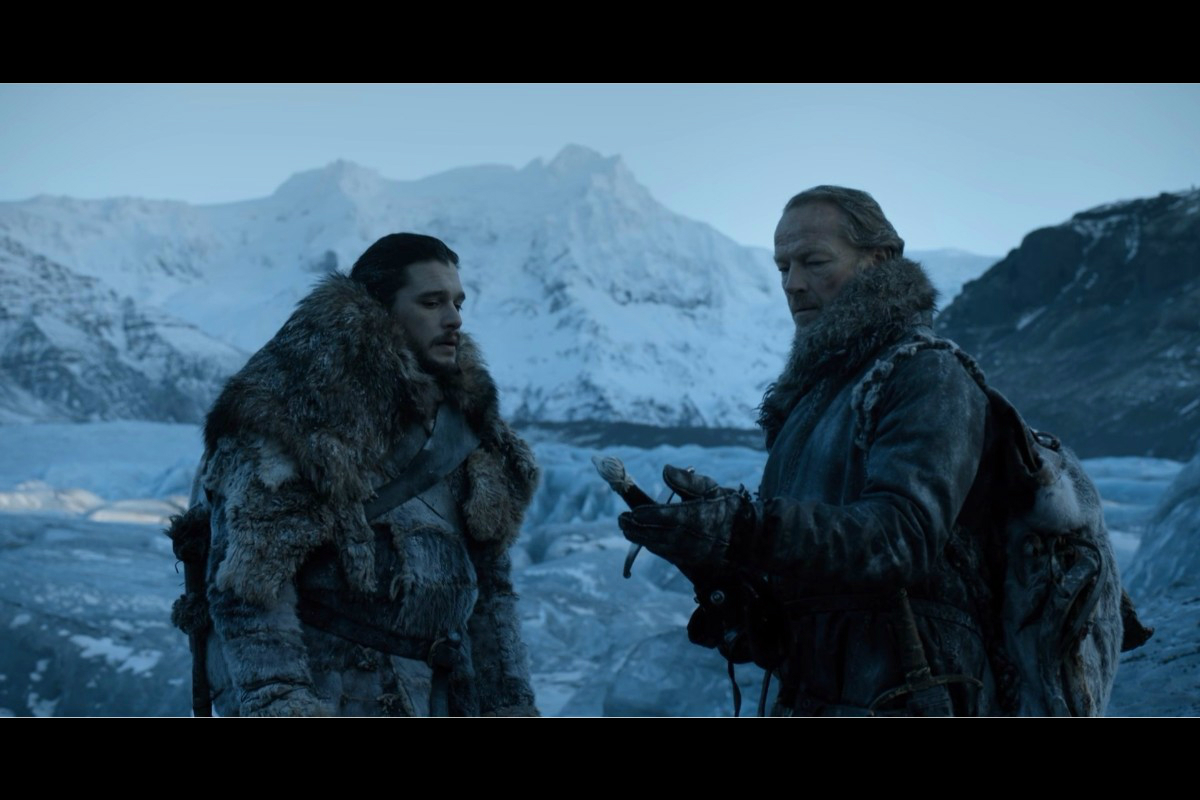 But, north they go. I enjoyed the awkward moments of characters who had either not met yet or had not seen each other in some time.

Jon - “Sorry my dad sentenced you to death, Jorah.”

Gendry – “Beric and Thoros sold me like a slave!” 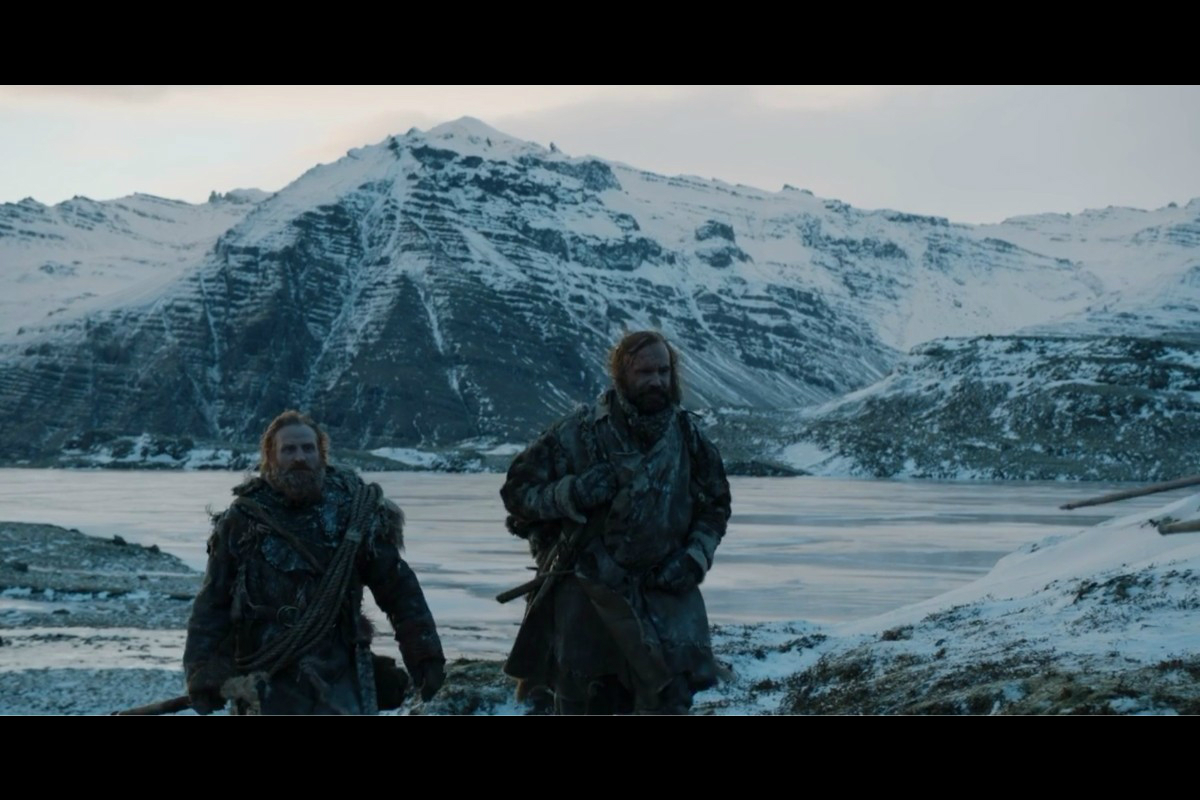 Joking aside, it was nice to see Jon and Jorah bond some over the great man that was Jeor Mormont. They both appreciated him and Jorah telling him that the sword should belong to Jon was a nice moment in an otherwise hectic episode. Along with the banter between the Hound and Tormund about Tormund’s passion for tall women, and the romance many have been anticipating between him and Brienne of Tarth.

I have heard some criticism of the show’s increasing lack of character development as the events of the series heat up and the story moves more quickly toward its climax, but the show runners are still sneaking in little moments here and there; I just hope they don’t totally eclipse the rich character development of the books for action. 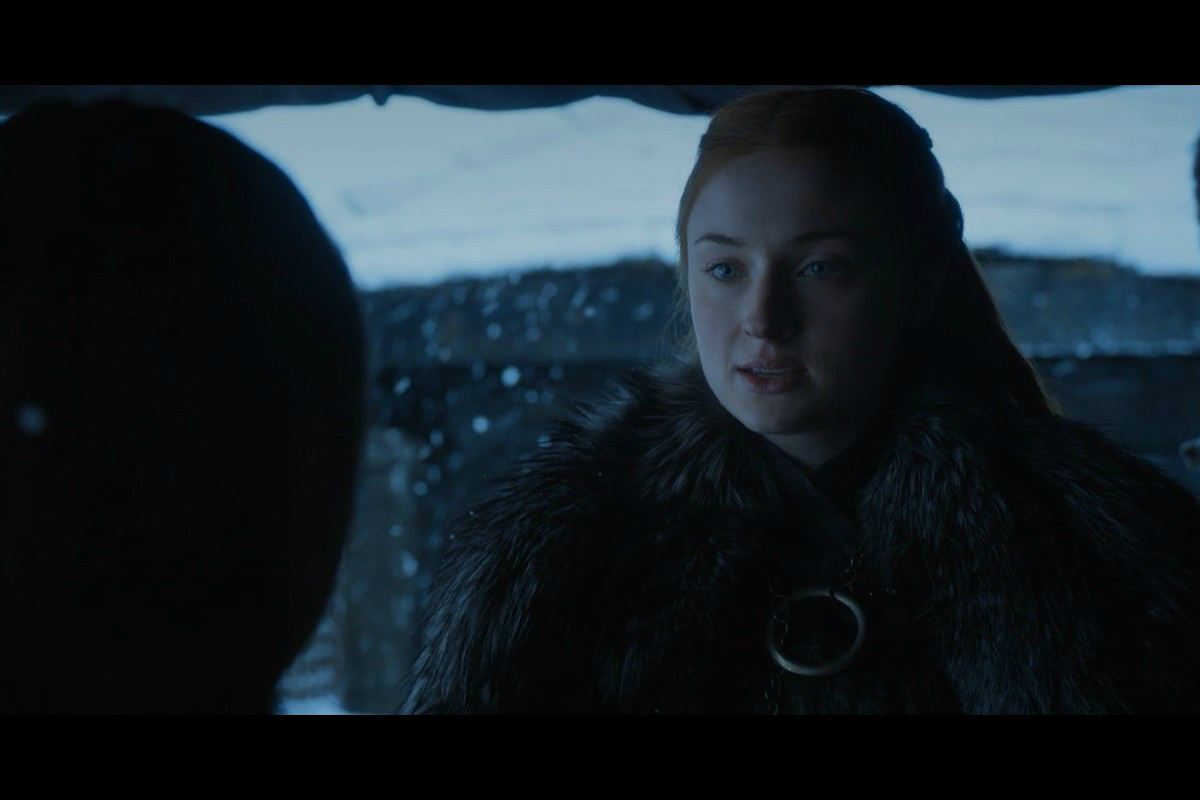 The new rivalry between Arya and Sansa though is somewhat aggravating, barely back in Winterfell for ten minutes and they already seem to hate each other again, though this rivalry has, admittedly, existed since their youth. Still, the traumas they have been through seem to have morphed them into two totally different people. Arya is more like Bran, devoid of much emotion that might bond her to her sister, instead she blames her for a message she wrote while a hostage of the Lannisters, which I don’t really understand, but then she seems naturally paranoid now; a result of her training, no doubt. Sansa isn’t doing herself any favors by making the mistake her father made once; trusting Littlefinger.

Stop. Listening. To. Littlefinger. He is just trying to drive wedges and stir things up for his unknown nihilistic machinations of chaos. Just get along, Sansa and Arya. Just hug it out. 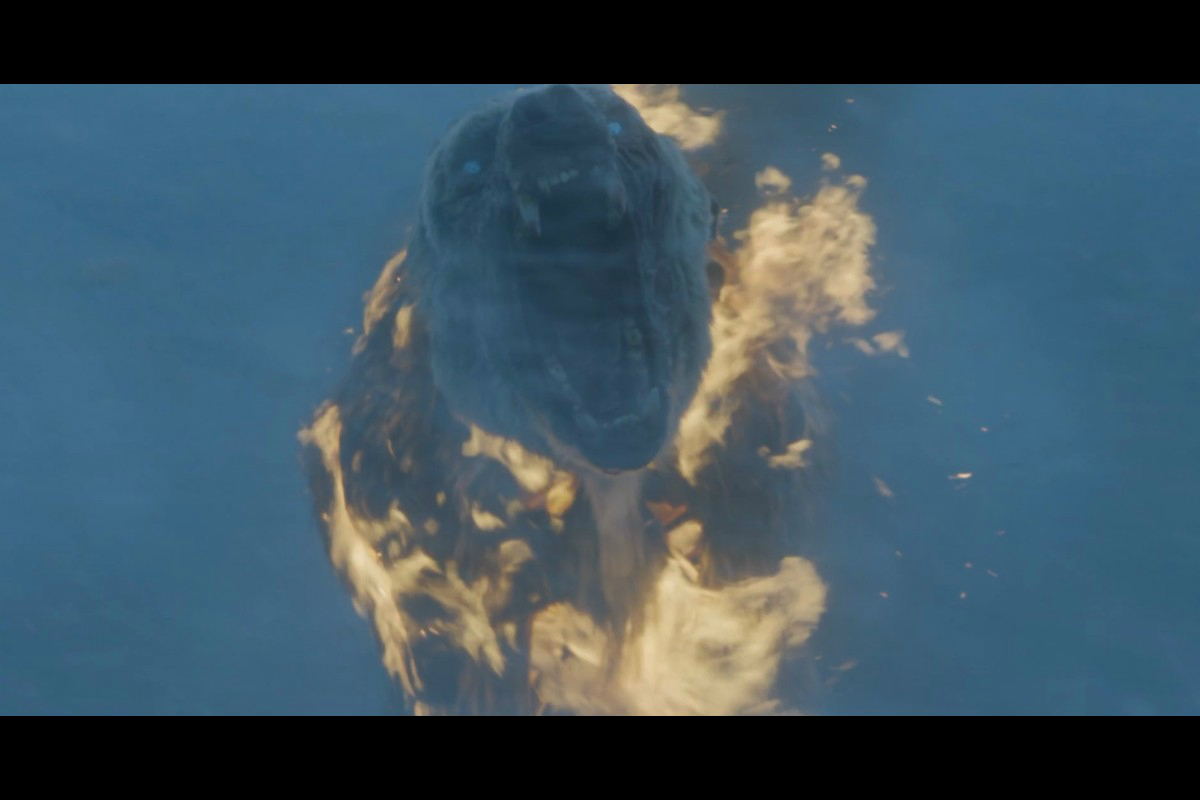 The heart stopping moments were soon to come. It all started with a wight bear that tore a couple people to shreds before mortally wounding Thoros the Drunkard. Who is apparently sufficiently tough enough after a zombie bear mauling to just take a swig of rum and let Beric cauterize his wounds with a flaming sword and still be able to hike through a blizzard.

They trudge on and find their lone band of wights and a White Walker, which when killed magically evaporates all but one wight. Highly convenient. Also props to Jon Snow on taking the leader board on White Walker killings.

As often happens in these circumstances, the zombie lets out a blood curdling scream and alerts the rest of the hoard, who immediately chase down the Dream Team. Fortunately they run out onto a frozen lake and the ice breaks, creating many zombie popsicles, but stranding the gang on a little rock in the center with nowhere to go and about a hundred thousand wights and the top leadership of the White Walkers, including the dread Night’s King, with his epic stare-down skills. 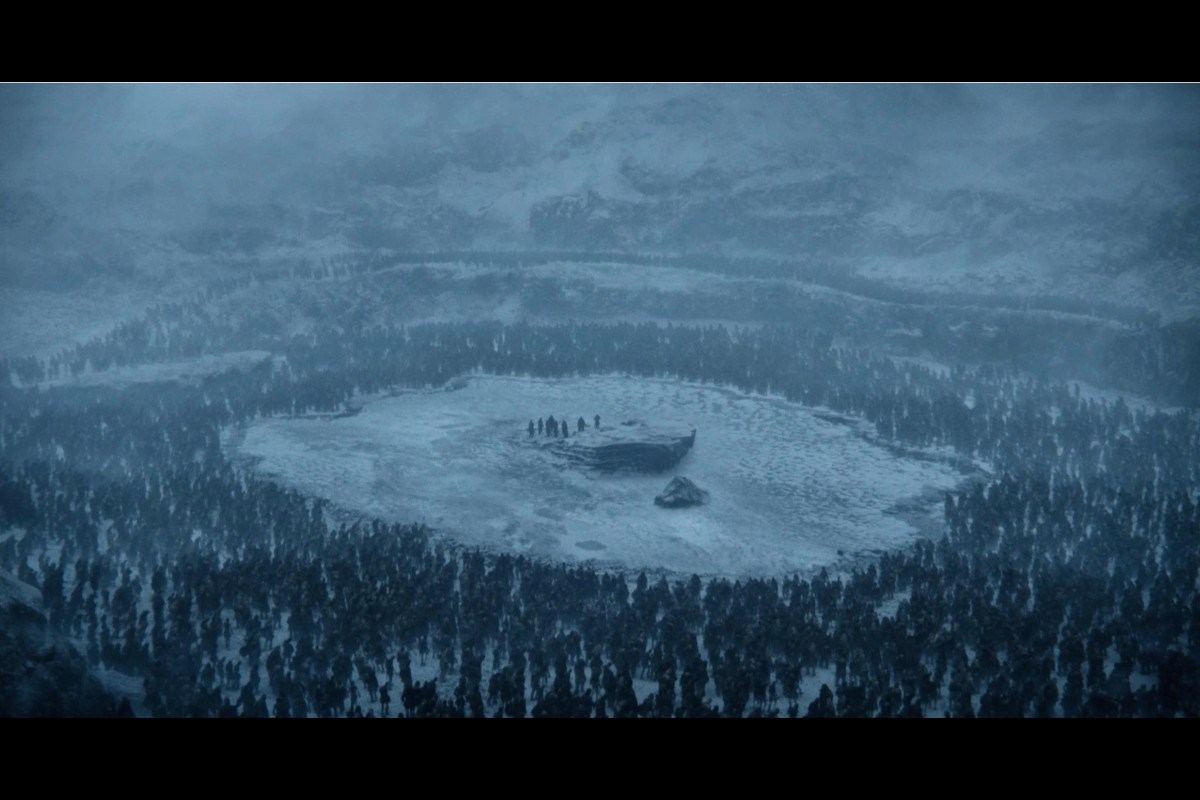 The Dream Team is naturally crapping it’s pants and decides to send Gendry out on his own (who time travels his way to the Wall where he sends a light-speed raven) before they are encircled to tag in Daenerys, playing the part of the Eagles in the Lord of the Rings, to please, OH PLEASE, PRETTY PLEASE, ABSOLUTELY NO RUSH BUT PLEASE COME PICK US UP. SOONEST. ALSO THOROS IS DEAD AND WE HAD TO USE HIS BODY AS A CAMPFIRE. JUST SAYING THINGS ARE NOT IDEAL.

Daenerys duly obliges against Tyrion’s wishes and flies off in, what I can only assume, is the dress she keeps in reserve specifically for icy dragon rescues.

Then everything just goes pear-shaped. The Hound, not content to leave well enough alone, starts hurling rocks at the army of the undead, unfortunately reminding them that the lake has frozen over again. Seriously why, Sandor? It also turns out the Night’s King is not just an epic staring contest winner, but also an Olympic Javelin Hurler.

Admit it. You knew it wasn’t going to be that easy. Swoop in, all aboard and off we go back to the Wall. No. It can never just be that easy. All of the remaining unnamed zombie-chow party members fulfill their purpose of being eaten, though fortunately no one else dies at least, aside from Thoros.

One dragon goes down in a fiery crash through the ice below in what *could* be described as a Song of Ice and Fire. Put a mental bookmark right here for a little later. Followed by the stunned, dumbfounded stares of the cast. 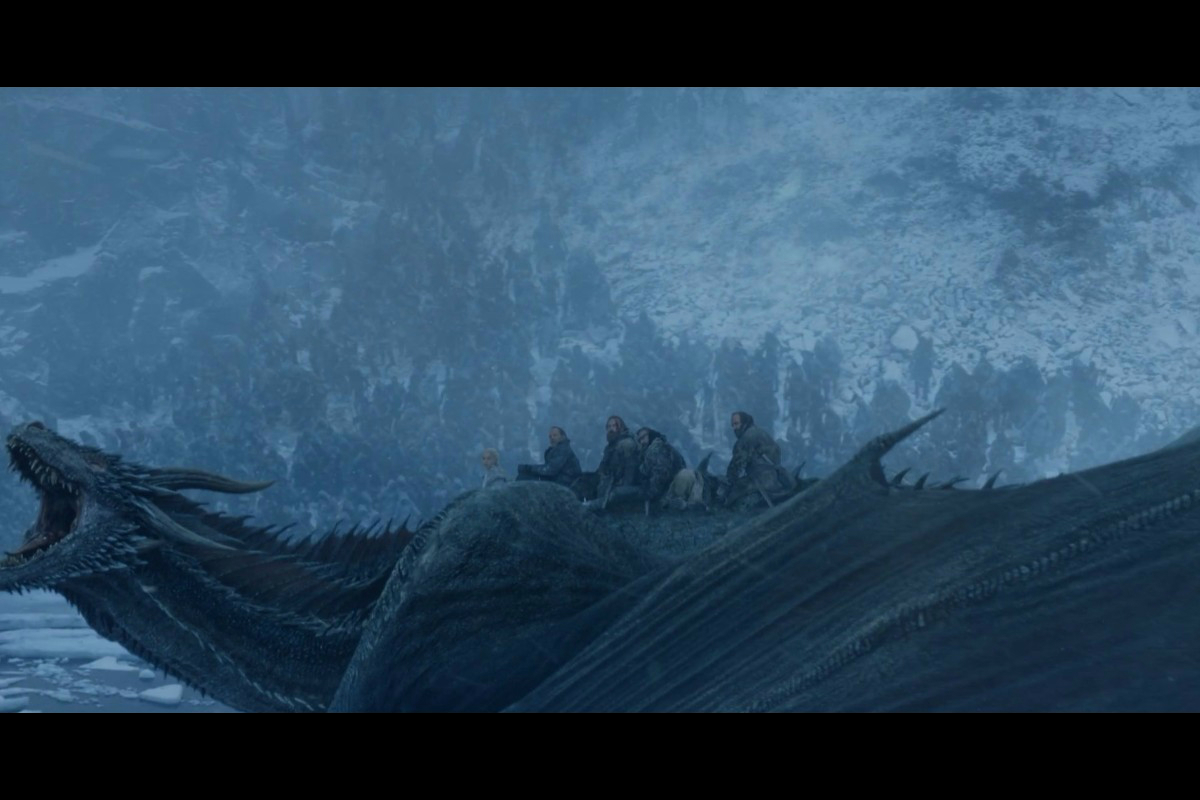 These stares go on for Way. Too. Long.

I get it. It was traumatizing, but seriously it is time to move now and fly away while you have two dragons and hey, maybe pick up Jon Snow with your dragon’s claw on the way out. No. Staring for way too long and Jon gets tackled into the frozen water and they fly off with another javelin near miss. I don’t yell at my tv for anything, and I yelled quite a bit during this. Mainly, “Ok, that happened, please MOVE NOW.” And, “JON, GET ON THE DRAGON.” At least they’d got their dead guy to bring on a freak show tour of Westeros and convince the rest of the world to stop fighting and realize how bad things are.

Jon emerges from the ice and is saved in the 11th hour yet again, this time by Benjen Stark who is half undead and apparently just sort of running around Beyond the Wall waiting for someone to save. He is predictably eaten. Jon gets back and wakes up to see Daenerys next to him on a lovely little boat.

I don’t know about you, but I was disappointed that he “bent the knee” in this case. I think it would have been way more interesting for them to work together or perhaps, as the show seems to be alluding to as they held hands and Jon called her Dany, marry their kingdoms together. I am not sure which one of them is the better ruler, but Jon has tended to be the better person, or at least less stubborn/severe. Still, I am interested to see where things go, though it will be sad if there is no more King-in-the-North. It's so fun to chant. 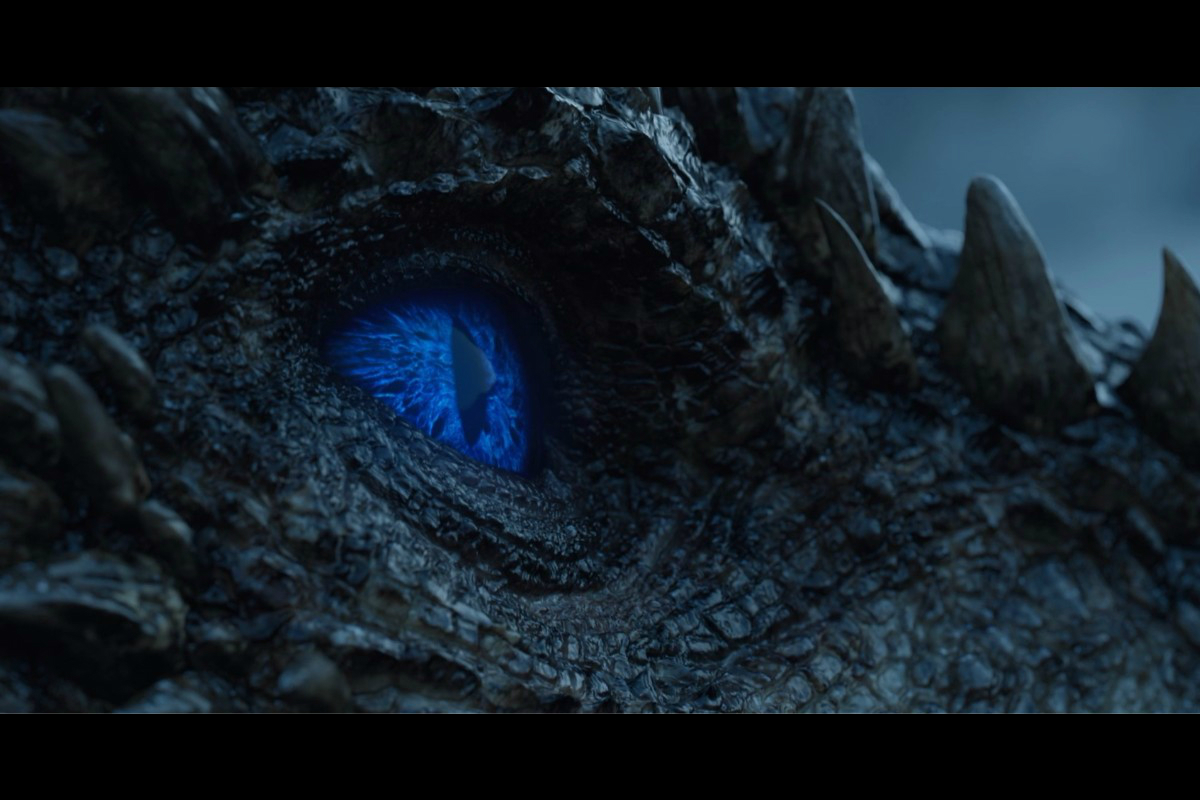 Then there was the zombie dragon. How else could the episode realistically end? As soon as that dragon went down, I just thought, "wow, they are definitely dredging that lizard up and bringing it back to life. That they did. And now, the White Walkers can get past the wall. Be afraid. Be very afraid. One more episode to go for this season and so much insanity to come. I would recommend keeping a defibrillator on hand next week. No, I don't know where they got the chains to drag it up either.