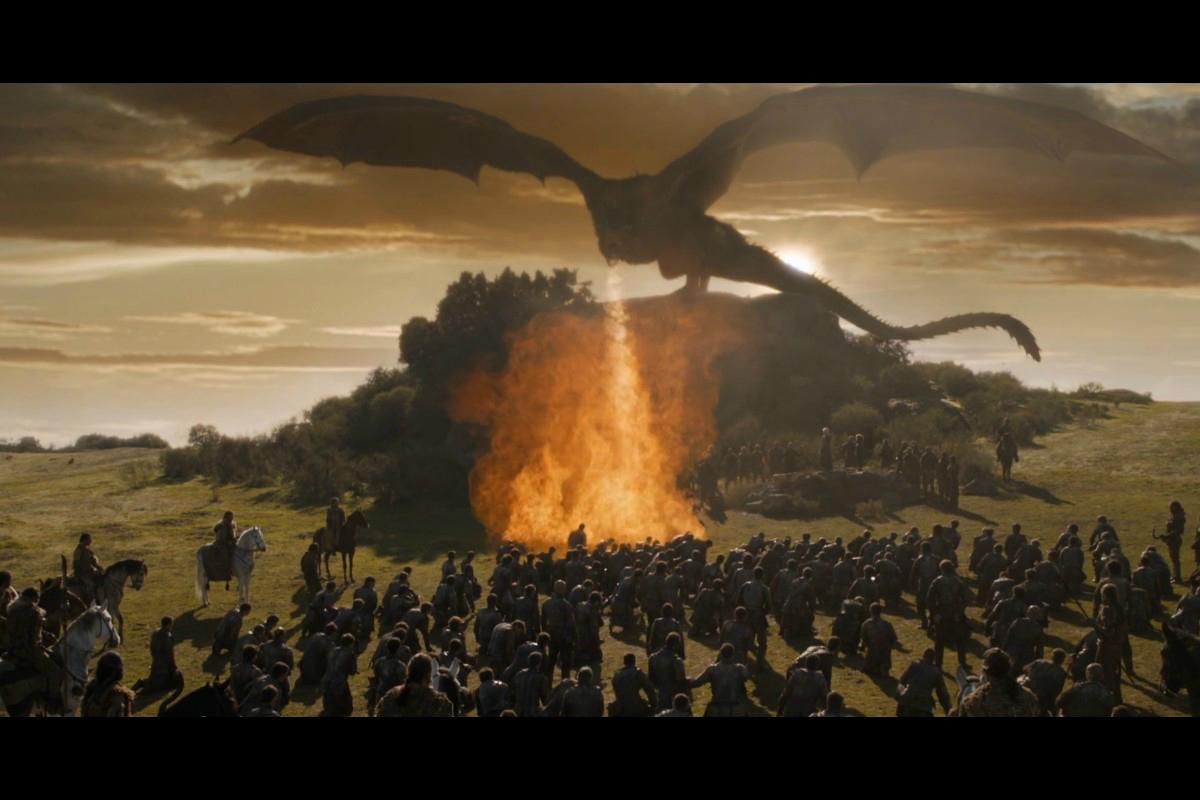 For those left on the edge of their seats last episode, it became immediately clear that despite only having a fake golden hand and being laden with armor, Jaime Lannister survived his botched attempt at becoming a dragon-slayer thanks to Bronn. Bronn’s main motivation in saving Jaime was, of course, saving the person most likely to help him get his long-awaited castle. This was something I think most of us expected, and Bronn’s harsh criticism for Jaime might well give him pause before attempting to charge down an enormous fire-breathing dragon again anytime soon. Seriously, what did he think was going to happen? At least he wasn’t a random foot soldier or a second-tier character because they don’t have dragon-proof plot armor, as we soon saw.

If you found yourself relieved to see Jaime alive despite him doing some generally reprehensible things like pushing kids out of windows to become three-eyed ravens or having a slightly more than cozy relationship with his twin sister then you, like me, might be questioning your own mind. Jaime is just one of those characters who you can tell has a moral compass bouncing around somewhere (i.e. saving Brienne and helping Tyrion escape) in there but can’t ever seem to quite find it and always leads the viewer down interesting paths and hoping he will finally forsake his family. 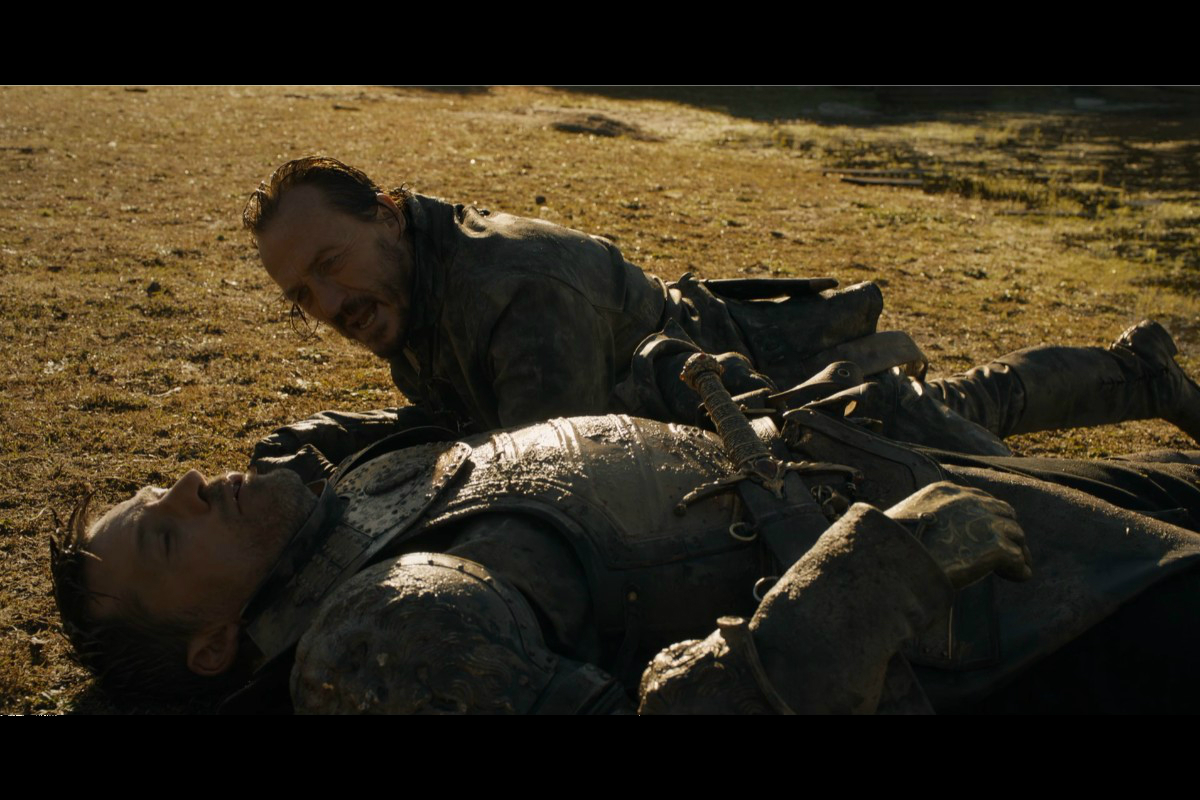 Keeping in theme with family reunions this season, with Arya, Sansa and Bran (So pro at three-eyed raven-ing that he can now control whole flocks of ravens to spy on the Night’s King) now back in Winterfell, Tyrion has now seen Jaime for the first time since murdering their father. Something I think we can all forgive him for being that he had sentenced him to death knowing full well of his innocence. Tyrion here tries to reconnect with the side of his brother that we all hope will pull through, telling Jaime of Tywin’s hatred for Tyrion simply because of how he was born. Whether Jaime fully heard it is hard to say but he did hear him out and report back to Cersei about his plea for an armistice with Daenerys. You can always tell he has these little moments where he recognizes his sister is a total sociopath, but she keeps pulling him back in.

Adding to their complications as a familial unit, Cersei appears to be pregnant and Jaime is, maybe, probably the dad? Hard to say if this is truthful or an attempt by Cersei to keep Jaime tied to her more closely. The life of a Lannister, they pay their debts and they keep family reunions interesting, like that uncle no one wanted to invite around but keeps showing up anyway. As a side note on GoT reunions, the one I really want to see is Bran and Jaime. That’s going to be an awkward one. “Sorry I paralyzed you, but you caught my sister and I doing things. At least you’ve got a career in three-eyed raven-ing, that’s good.” *Bran stares blankly with dead eyes.* 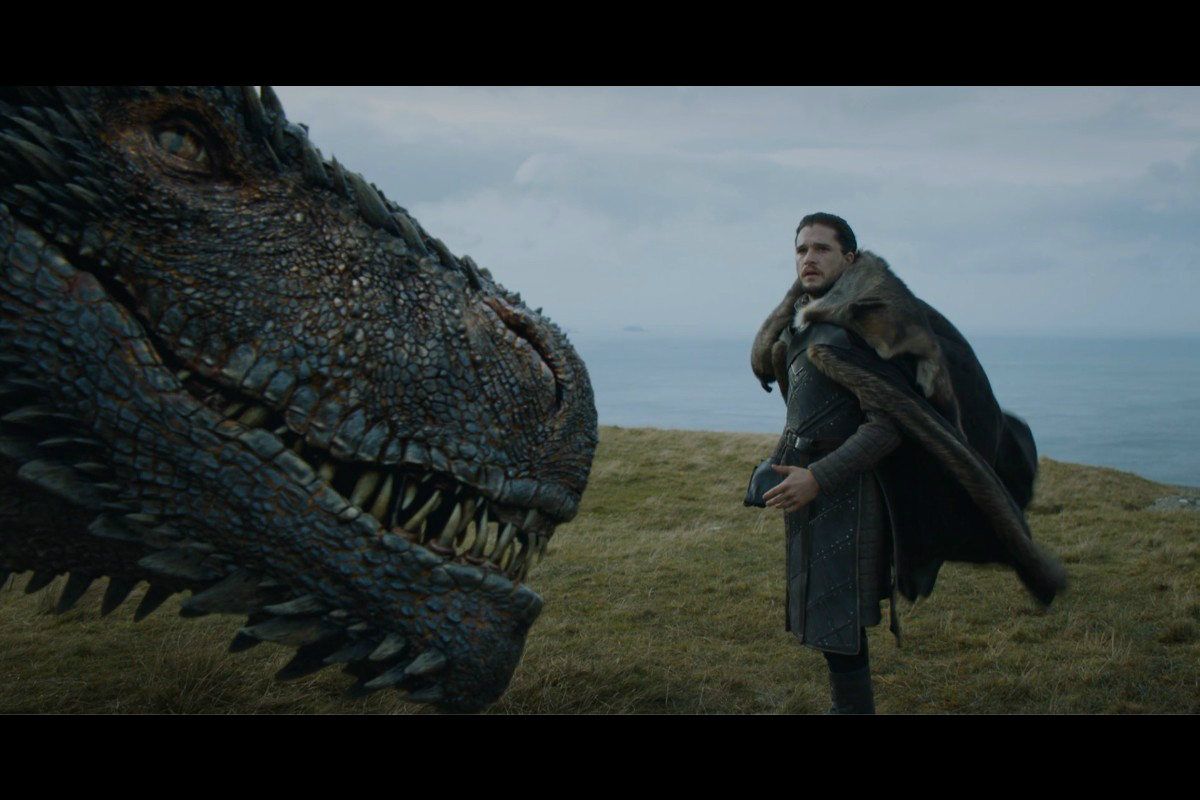 The Lannisters monopolized a lot of time this episode but so much more was going on. The aftermath of the battle at the end of Spoils of War saw the Lannister soldiers, aside from Samwell Tarly’s brother and father who ended up deep fried and dead, bending the knee to Daenerys in order to avoid the dragon’s flame. Tyrion and Varys seemed concerned by her lack of clemency and had some slight worries that some of her father, the Mad King, might live on inside her but she is facing an enemy in Cersei that is much more ruthless than she. Whether it was the right decision we will soon find out, though burning lords alive with your dragon rarely wins you sympathy amongst the local elite. Still, it is little more mercy than she would have been shown had she been captured. She is at heart a good person, but she has a hardened side of her that seems incalcitrant to good counsel at times as a kind of defense mechanism; though in this case she may have made the right choice. Also, Jorah is reunited with Dany! Yay! Only to leave and go north.

Speaking of Tarlys, Samwell seems to have abandoned his brief tenure at the Citadel in Oldtown. Well, good. I don’t really have much to say about that. They have hundreds of thousands of scrolls about every topic under the sun, many of which must mention the White Walkers north of the wall in some detail but they don’t seem to take any of it seriously, even when the warnings arrive from credible sources. “I’m tired of reading about the deeds of better men,” says Samwell as he rides off with Gilly to make some good deeds of his own. Good on yah, Sam. Knowledge is power. 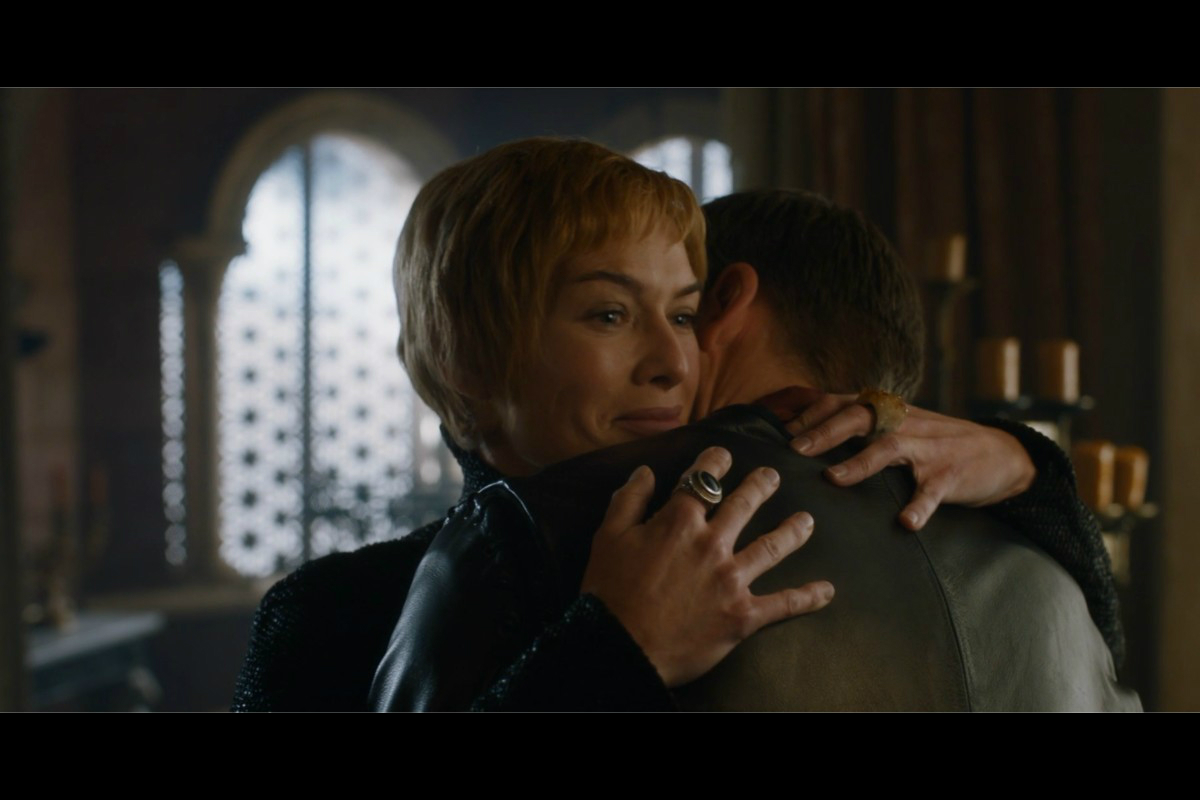 Meanwhile, at that seedy old hub of Westeros, King’s Landing, DAVOS SEAWORTH (who has been a favorite of mine since I read the books way back when) has arrived to provide us with another reunion we have been in dire need of. Sneaking into the city under the pretense of selling some “fermented crab meat Viagra,” oh Davos you sly Onion Knight, you, he has actually come back in search of a boy he sent rowing out of Dragonstone in season three. Gendry, hiding under Cersei’s nose (I guess that makes sense?) by working at the exact same job, in seemingly the exact same place (honestly, couldn’t he have at least tried to change his appearance or grow a silly mustache or something?) he did before when she tried to have him killed for being Robert’s bastard child.

“I thought you might still be rowing,” Davos says in a nod to those of us who wondered where Gendry had rowed to, lo those many years ago. What’s more, he is good at swinging a mighty warhammer like his old man. Again, an onion brings tears to my eyes.

Leading us closer to the climax of the episode, in Winterfell, Littlefinger is up to his usual shiftiness, which seems to have rubbed off on Sansa. Barely together a full episode and Arya and Sansa already do not trust each other, proving the Lannisters aren’t the only ones with problems. This I kind of don’t get, I understand they have both been through a lot, but this escalated quickly. Perhaps it is Arya’s newfound self-isolation and people watching prowess she gained from the Faceless Men in Braavos that leads her to immediately question Sansa’s motives when she does not stick up for Jon Snow in front of his lords.

Underestimating Littlefinger, Arya spies on him as he has some shifty darkened hallway meetings about a mysterious scroll he then purposely hides under his bed for Arya to find. My only hope is that she is making him think that she doesn’t know he’s spying on her spying on him or something like that. 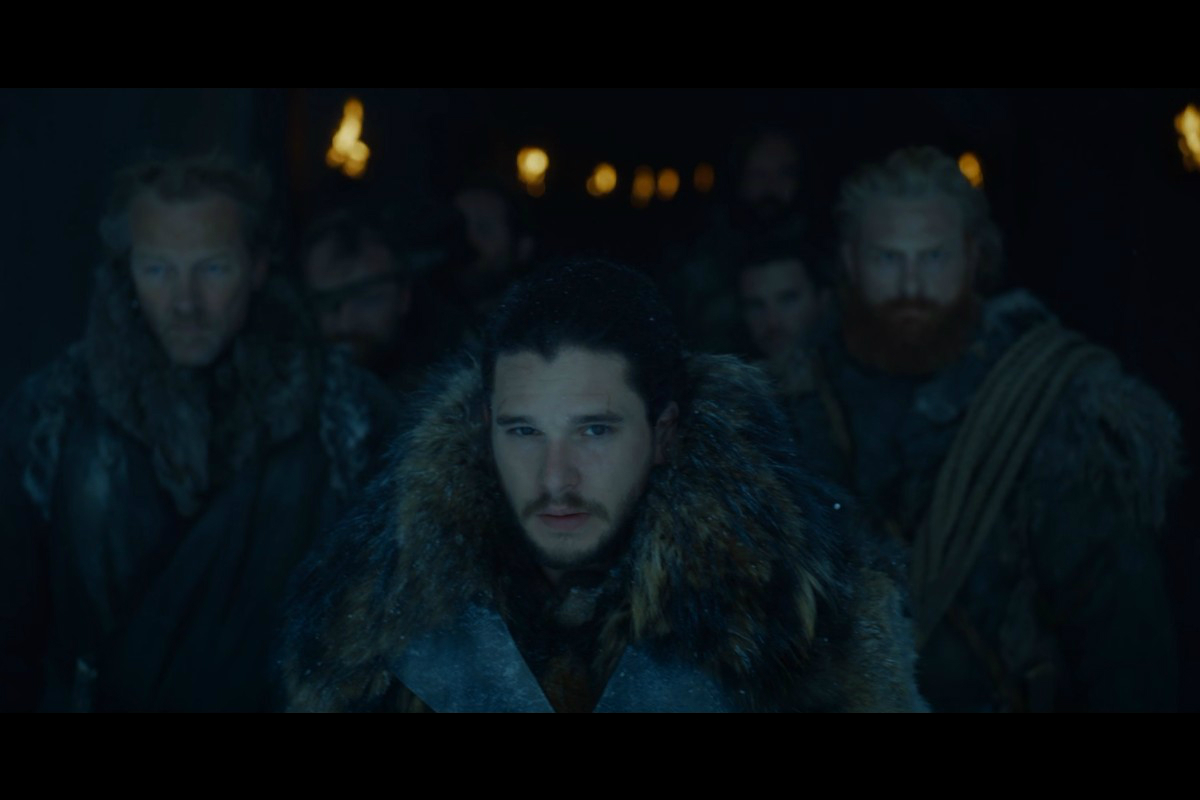 Now, the climax. The thing we did not know we needed in our lives until it was seen on screen. Jon, that King in the North we love so much, has finally returned North, presumably via dragon or time warp, and has brought the makings of a dream team with him as the healed Jorah Mormont and Gendry the Hammer come to venture north of the wall with him to catch a dead guy to convince the rest of Westeros that the dead are indeed doing things they shouldn’t be. Not satisfied, the show creators have dropped in The Hound, Beric Dondarrion, Thoros of Myr and Tormund Giantsbane to make up the greatest dream team ever to venture north into a nightmarish hellscape in order to capture and bring south an undead creature. I cannot wait to see where this goes, and it’s going to look incredibly good on a resume for all of them. “I captured an undead creature in a winter wasteland literally ruled by snow demons and convinced the world they need to work together to stop the actual evil facing our world.”

Here’s to hoping they are successful at convincing the world and stopping the mindless power struggles that have engulfed Westeros. Unity against this common foe is their only hope. Also, please don’t kill Jon again, show writers. Or the Hound. Or Beric, he has a flaming sword and an eyepatch! YOU CAN’T DOUBLE KILL A CHARACTER, GEORGE.