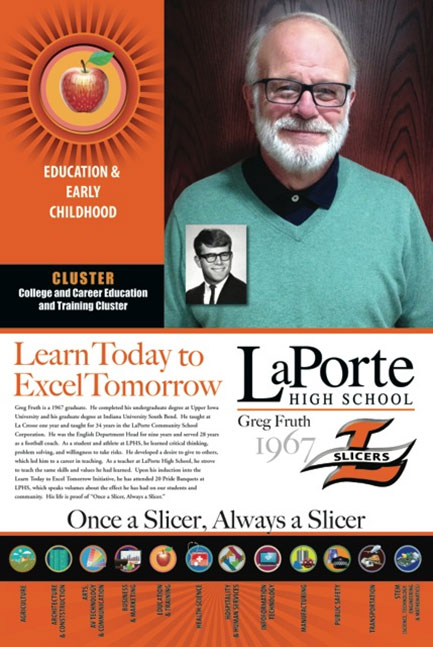 In the College and Career Hospitality and Human Services Cluster: Tom Dermody. Tom Dermody is 1984 graduate and earned his Bachelor of Science in Supervision Management from Purdue University. Besides being a State Representative for House District 20, he is a local small business owner. He has served on a multitude of committees including the Small Business and Economic Development Committee, Agriculture and Rural Development Committee, chairman of the Public Policy Committee, and Member Commerce. He currently is the chairman of the Small Business Caucus. He is also a community volunteer serving on the YMCA Board, Salvation Army Board, and the LPCSC School Board.

In the College and Career Education and Training Cluster: Greg Fruth. Mr. Fruth is a 1967 graduate. He completed his undergraduate degree at Upper Iowa University and his graduate degree at Indiana University South Bend. He taught at La Crosse one year and taught for 34 years in the LaPorte Community School Corporation. He was the English Department Head for nine years and served 28 years as a football coach. As a student and athlete at LPHS, he learned critical thinking, problem solving, and willingness to take risks. He developed a desire to give to others, which led him to a career in teaching. As a teacher at LaPorte High School, he strove to teach the same skills and values he had learned. Upon his induction into the Learn Today to Excel Tomorrow Initiative, he has attended 20 Pride Banquets at LPHS, which speaks volumes about the effect he has had on our students and community. His life is proof of “Once a Slicer, Always a Slicer.”

In the College and Career Public Safety Cluster: Lieutenant Colonel Jason W. Heuer. Lieutenant Colonel Heuer is a 1993 graduate and graduated with a Bachelor of Science in Economics from Purdue University. He received his Naval Aviator wigs after graduation from Naval Flight School in 2000 and graduated Expeditionary Warfare School in 2005. He has been stationed at MCAS Camp Pendleton, CA as an Iroquois Helicopter Pilot and in Okinawa, Japan as a Naval Air Training and Operating Procedures Standardization Officer. He has served a nineteen month tour of duty flying helicopters in support of OPERATION ENDURING FREEDOM in Afghanistan and two nine month tours of duty flying helicopters in support of OPERATION IRAQI FREEDOM. He has been an Instructor Pilot and Staff Platoon Commander at Marine Corps Flight School, Squadron Executive Officer of Marine Aircraft Group 39, and Squadron Commander of MAG-39. In 2014, he was promoted to Lieutenant Colonel.

In the College and Career Education and Training Cluster: First Lieutenant Russell Allen Phillips. First Lieutenant Phillips is a 1934 graduate and earned a Bachelor’s degree in Forestry and Conservation from Purdue University. In 1941, Mr. Phillips reported for active duty with the Army Air Corps. He served as a Lieutenant and pilot during WWII. His remarkable story of heroism and survival has come to light due to the #1 New York Times Bestseller Unbroken by Laura Hillenbrand and war drama film Unbroken. On May 27, 1943, First Lieutenant Phillips’ plane, “The Green Hornet,” crashed into the Pacific Ocean. He survived for 47 days adrift in the ocean on a life raft. He was then captured by the Japenese and imprisoned for two years, being shuffled to numerous POW camps. After his service in WWII, he returned to Indiana and married his wife, Cecile. He became a science teacher at Kesling Middle School and raised his two children, Chris and Karen, in LaPorte.

In the College and Career Health Science Cluster: Dr. Vinay Prasad. Dr. Prasad is a 2001 graduate and graduated Summa Cum Laude with a Bachelor of Science from Michigan State University. He then received his Doctor of Medicine from the Pritzker School of Medicine of the University of Chicago in 2009 where he received the Chairman’s Award in Internal Medicine. He also received a Masters of Public Health from the Johns Hopkins University in 2014. He has received numerous awards including First Place for Resident Research at Northwestern Memorial Hospital, The Gerald Grumet Award for the Best Resident Teacher, and Most Teaching Awards received by an intern. He has also written numerous publications regarding Oncology, Evidence Based Medicine, Health Policy, Health Economics, Medical Decision Making, and Alternative/Complementary Medicine. His speaking engagements include events at Northwestern University, the National Cancer Institute, the University of Chicago, and the Knowledge Translation Institute of Canada.

In the College and Career Health Science Cluster: Elizabeth VanHook. Elizabeth is a 2001 graduate and earned a Doctorate of Pharmacy with a specialization in nuclear pharmacy from Purdue University in 2007. Although she had nuclear pharmacy internships in Toledo, OH and Denver, Co, she decided to remain close to home after graduation and decided on a career as a hospital pharmacist at IU Health LaPorte Hospital. As a staff pharmacist, her clinical duties include intravenous antibiotic dosing and monitoring, parenteral nutrition support, medication review and management, infusion center/chemotherapy support, patient education, and medication verification. She specialized in maintaining the computer system in conjunction with the clinical informatics department to ensure accurate, up to date functionality of the medication database. As a pharmacist at IU Health LaPorte Hospital, she has also taken part in health fairs at local businesses and schools, performed skilled nursing facility patient and physician clinic chart reviews, and gained experience as an outpatient pharmacist. She is also involved in local organizations such as the LaPorte Educational Foundation and the LaPorte Jaycees.

Our 2014-2015 Learn Today to Excel Tomorrow inductees will be honored at our annual LPHS Pride Banquet at the end of the month, and displays will be created and exhibited in prominent locations throughout LPHS. We want to thank the community for their nominations and encourage the community to continue nominating LPHS graduates that illustrate Learn Today to Excel Tomorrow. 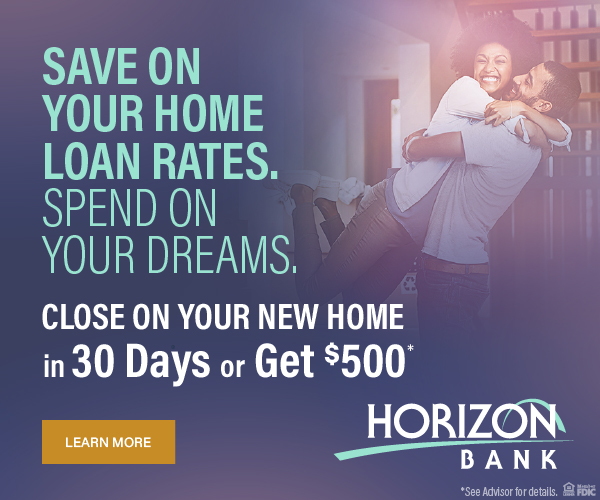