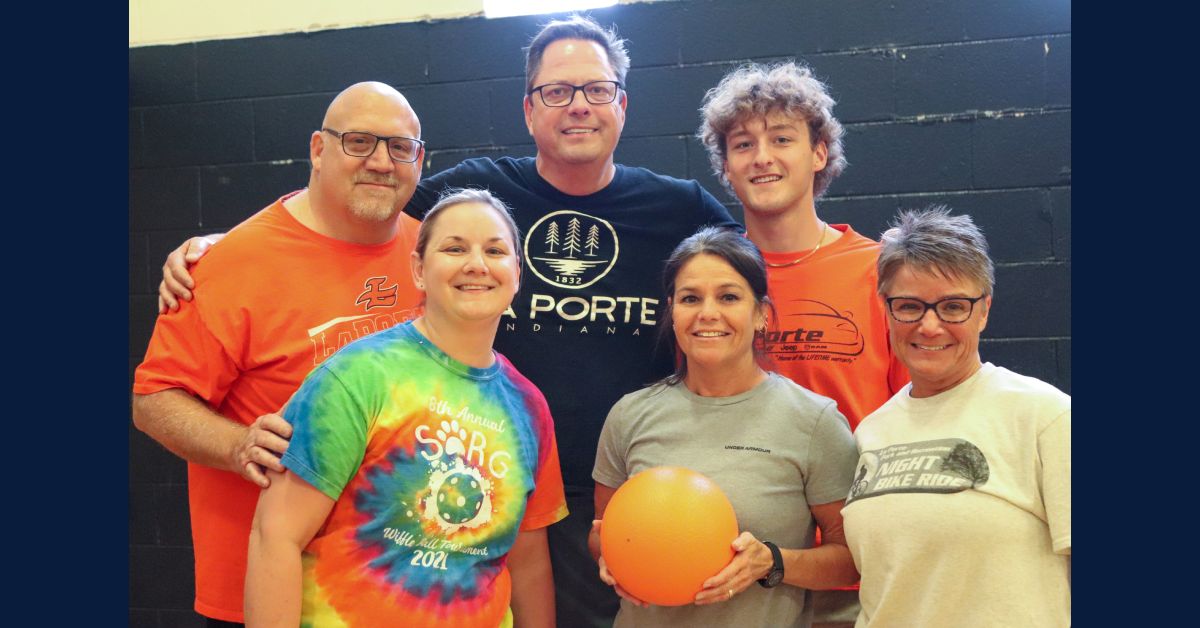 This week, businesses from La Porte participated in the La Porte Economic Advancement Partnership’s (LEAP) Olympics. The event included 14 businesses who played seven games to win a traveling trophy. Participants were playing to win, but more often cheered for their teammates and even their competitors.

“The YMCA used to do a corporate games," said LEAP Director of Marketing and Communications Lindsay Jongkind. "Their last year was 2019; our idea with resurrecting that was that everyone has been cooped up since COVID. This is just a way for companies to let their employees let loose a little bit. We are hoping that this will be a team-building activity and something fun that will bring the business community together. It seems like everyone is really enjoying it. The teams aren’t overly competitive, but they have that kind of joking edge. It has been fun watching the teams compete in the more physical games like ring toss. I don’t think anyone has played that since the fifth grade.”

Participants were joyful during each event. The Olympics included volleyball, dodgeball, cornhole, Euchre, golf, bowling, a scavenger hunt, and ring toss - a beloved game in La Porte’s schools. The Olympics created an opportunity to play without pressure while developing useful skills.

“The goal is that we have a good time and create teamwork, cooperation, and chemistry between each of our teams. If you look at the teams, they are businesses and non-profits that work in our community, so the hope is to come out in a different setting and work with their teammates,” said LEAP Executive Director Bert Cook. “For me, my favorite event was dodgeball which I got to referee, but, talking to everyone, people will always say that their event was the best which demonstrates the fun that everyone had."

To get their best shot at winning, players jumped and ducked in dodgeball and would dive to the ground in games like ring toss. Each team showed that they wanted to win, but forgave each other for fumbled catches and gifted high-fives to the victors.

“The city is insanely competitive," Jongking joked. "The mayor has called multiple times asking where they stand and who is in front of them, who is behind them. That’s been fun and seeing the comradery between the teams has been great.”

Teams that got involved joined for competition but were eager to meet the other teams. Some participants brought their children or family members to join in or watch.

“Our office is rather competitive, and when LEAP told us about it and our boss looked at them and said ‘We’re in, I already know who the teams are,’” said Creative Director at Duneland Media Sarah Zygmuntowski.

Duneland Media participated in most of the games including dodgeball, ring toss, and Euchre.

“I’m excited to win, and beat the city of La Porte," said Duneland Media Digital Marketing Coordinator Marisa Gentry. “But, truly, I’m excited to get involved, meet people from other companies, and really just do something within the community.”

The LEAP Olympics demonstrated the company's values by enriching the lives of participants and creating an enjoyable way to learn. They provided a space for businesses to meet and enrich each other’s work through community.

For more information on the La Porte Economic Advancement Partnership, please visit their website at laportepartnership.com.