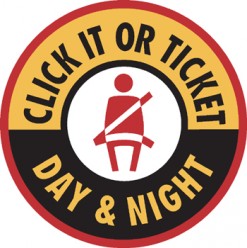 In total, 197 citations and 118 warnings were issued. In addition to the passenger restraint citations mentioned above, citations were also issued for texting; motorcycle license violations; driving while suspended; no driver’s license; speeding and other traffic violations. Two DUI arrests were also made.

“The importance of seat belt usage cannot be overstated,” said Captain Tom Heath. “Ensuring drivers and their occupants understand the risks of not buckling up is a priority we share all across the state. This campaign drives home the message that seat belts save lives, and it’s a message we will continue to spread all year long.”

According to the U.S. Department of Transportation’s National Highway Traffic Safety Administration (NHTSA), in 2014, 87 percent of drivers and passenger across the nation were wearing seat belts. NHTSA statistics show in 2012 alone, seat belts saved an estimated 12,174 lives nationwide. In Indiana, in 2013, seat belt usage in passenger cars was 91.6 percent.