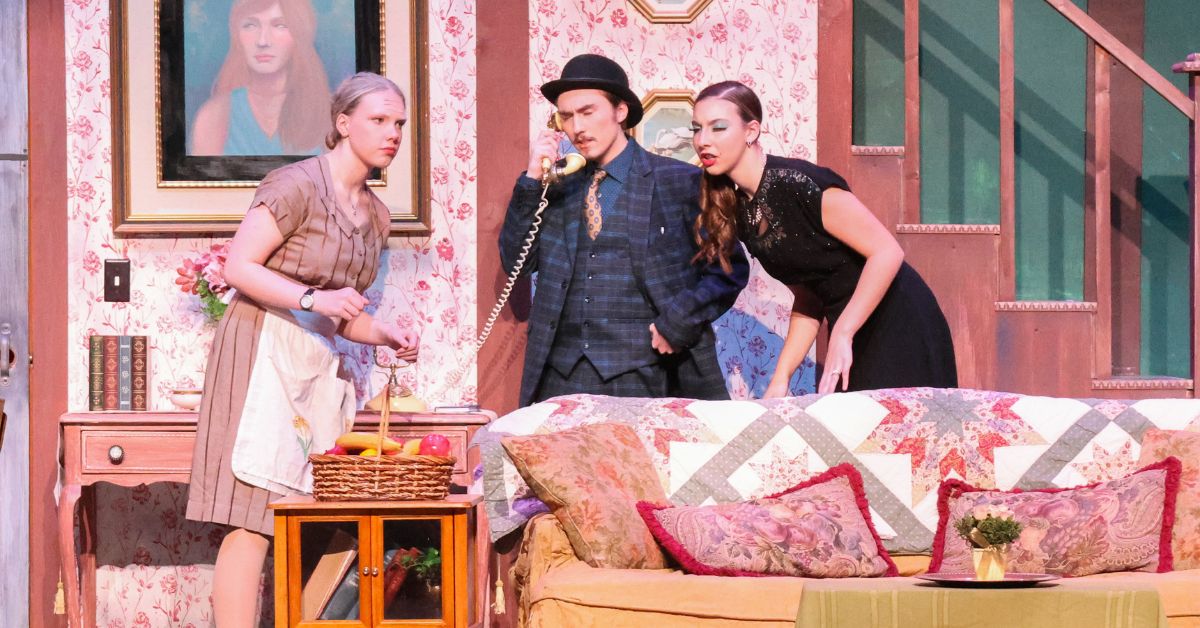 On Friday November 18, La Porte High School held its opening night for its fall semester play, The Murder Room and to say it was a success would be an understatement. The murder mystery comedy was the lighthearted, perfectly plotted performance the community needed.

Tim Hanson and his wife Sallie Hanson co-directed the play. When picking out this semester’s play, both agreed that lighthearted was the way to go.

“We wanted to do a comedy,” said Tim Hanson. “Our motto for this play is to make them laugh because we felt people needed a laugh. We wanted to bring the community joy rather than something more heavy-hearted.

There are so many bad things happening in the world, and since Covid, everybody has had this anxiety. So, we wanted to relieve that stress a little bit, make them forget for a while, and let them walk away smiling.”

This goal was achieved. Laughter echoed throughout the theater during the entire play. The audience couldn’t get enough of the performers’ quick-witted performances, the excellently timed sound effects, and the ridiculously funny skits.

The Hanson’s agree that all the kids have come so far over the past few months. They’ve truly become wonderful young performers.

“Watching the kids get better with their characters and bond has been incredible. I hope they all have successful performances and that when they move on to the next play they’ll continue to grow and learn even more about theater,” said Sallie Hanson.

Christian McGuire, who is a sophomore, played two characters in the show: Edgar Hollister and Abel Howard. He had so much fun playing the characters and bringing them to life, while at the same time making them his own.

“It’s fun because half the time the characters are cold, calm, and collected and the other half they’re in an absolute panic. So, they’re going back and forth and back and forth and that’s just so much fun to mess around with. Towards the end of the play, I purposely let my hair get disheveled because it’s just so nuts,” said McGuire.

Emma Miller, a senior doing the lights for the show, has been a part of the theater tech crew since her freshman year. Tech crew has had such a huge impact on her life that she’s decided to pursue stage management at Butler University after she graduates. The Murder Room has been one of her favorite plays--she couldn’t say enough great things about it.

“It’s just so funny. The British accents are on point, the actors are super talented, and the set is amazing. Our lighting system is really good since it was just updated a few years ago. We have intelligent lights so when they move around on set we can change the colors and make the lights spin and do different shapes,” said Miller.

Overall, all the students had a great time putting on the show, and are proud of all the work they’ve done.

“Everyone’s been so fun to work with. I enjoy talking to all of them--they’re all my friends so it’s never awkward and we’re like a little family. We’re going to put on a really good show and I really hope people come out and see it,” said Ellie Hopper, the sophomore playing Mrs. Lottie Molloy.

Everyone was grateful to have the opportunity to come together as a team and bring some joy into the community.

“I just want to thank the La Porte High School Administration for building this beautiful facility and letting us do this show here. It’s amazing. I love this theater--it’s one of the best I’ve ever worked in. We’ve had so much fun,” said Tim Hanson.

If you missed tonight’s show don’t fret! There will be two more showings this weekend. The first will be on Saturday the 19th at 7 p.m and the second will be on Sunday the 20th at 2 p.m. Tickets are ten dollars, and everyone in tonight’s audience can assure you that the performance is worth every penny. So, come on out and get ready to laugh--this is an unforgettable comedy you don’t want to miss.