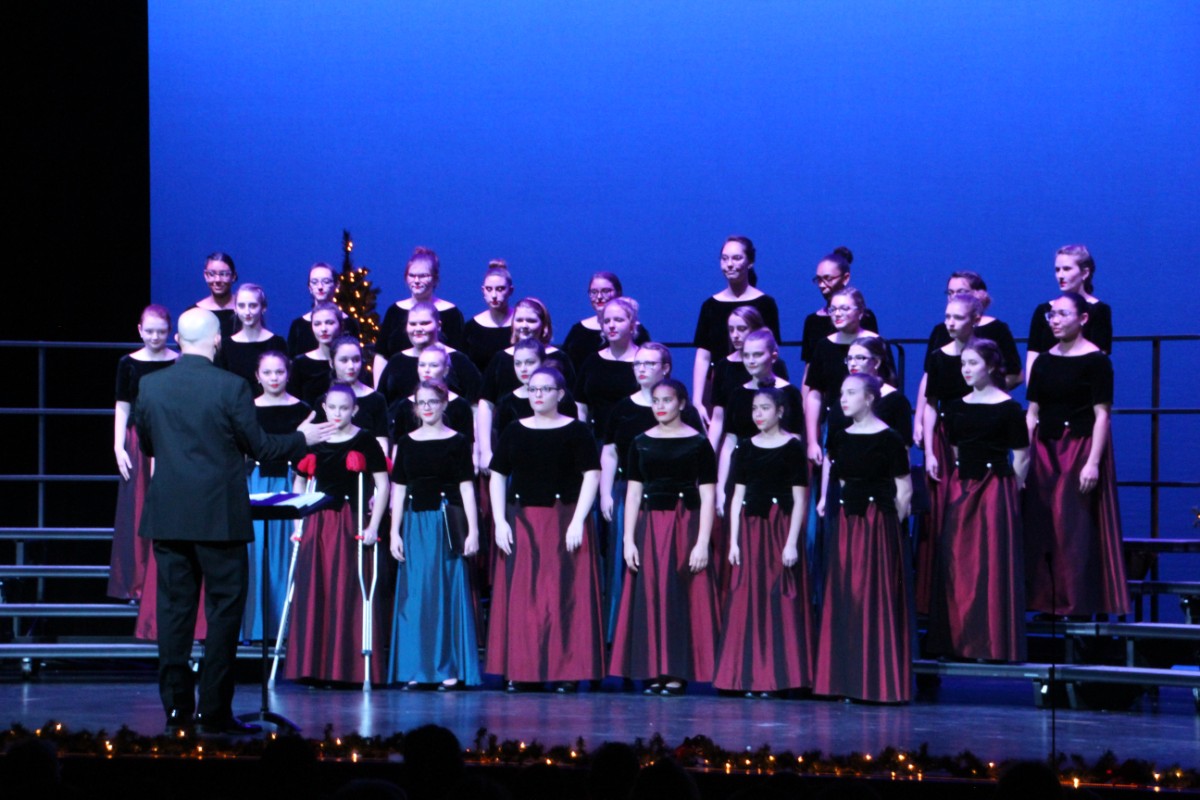 While the temperatures outside crept lower and lower, family and friends of the La Porte High School Music Department felt the warmth of the holiday season at this year’s Winter Choral Concert. Although the Winter Choral Concert is an annual tradition for La Porte High School, the venue this year was a big change. Previously performed in the school’s old auditorium, this year’s concert was the first to be held in the new Performing Arts Center of La Porte High School. The gorgeous venue amplified the beauty of the concert. There wasn’t a bad seat in the house as the community came together to enjoy the performance.

Logan Biggs, a sophomore at La Porte High School, was moved by the overwhelming turnout of the community.

“It was great to see the crowd,” Biggs said. “I think it’s really exciting to see all these people watch us. We put a lot of effort into this, and it makes us feel great to see them out there.”

As the lights dimmed to begin the concert, the audience turned their heads to see the combined choirs gracefully fill the aisles with candles in their hands. In one of the most intimate performance art pieces in the Region’s history, the combined choirs performed “Three Wise Men, Wise Men Three,” “Winter Lullaby,” “Shepherds, Awake!” and “Lullaby for a King.” The crowd waited silently in awe for the pieces to conclude before exploding into applause.

With stunning performances by the women’s chorus, the men’s chorus, the treble chorale, the chorale, the advanced choirs, and the combined choirs, the Winter Choral Concert showcased the remarkable talent, passion, and bond of the La Porte High School Music Department. Anthony Hughes, a senior at La Porte High School, appreciated the connection between the members of the choir.

“We’re all a family here,” Hughes said. “It’s always great to be singing together.”

The performance displayed the singers’ versatility and appreciation for vibrant and meaningful culture as several pieces included in the Winter Choral Concert were performed in foreign languages. LPHS Choral Director Thomas Coe offered rough translations for verses of “Petit Enfant,” “Betelehemu,” and “Gaudete.”

The stunning performance concluded with the combined choirs’ presenting three different verses of the well-known “Silent Night.” The choir celebrated the 200th anniversary of “Silent Night” by performing the piece in its foreign language, in English, and in American Sign Language.

For those in the audience on Wednesday night, the performances by the La Porte High School Music Department will not soon be forgotten. The choir’s passion for music could be felt by all who attended, and the warmth of the holiday season filled the air. Coe extended his gratitude for the continued support from the La Porte community.

“I want to thank you very much for being here tonight in our first performance of the school year in the new auditorium,” Coe said to the audience before introducing “Sleigh Ride,” a song that has become a tradition at the Winter Choral Concert.

The crowd rose to a stand to cheer on the amazing talent of the LPHS Music Department. With congratulatory flowers in hand, family and friends of the performers filled the halls, eager to celebrate the Winter Choral Concert with their loved ones. As families embraced and new friendships were formed, the attendees left La Porte High School with the warmth of the holiday season in their hearts.