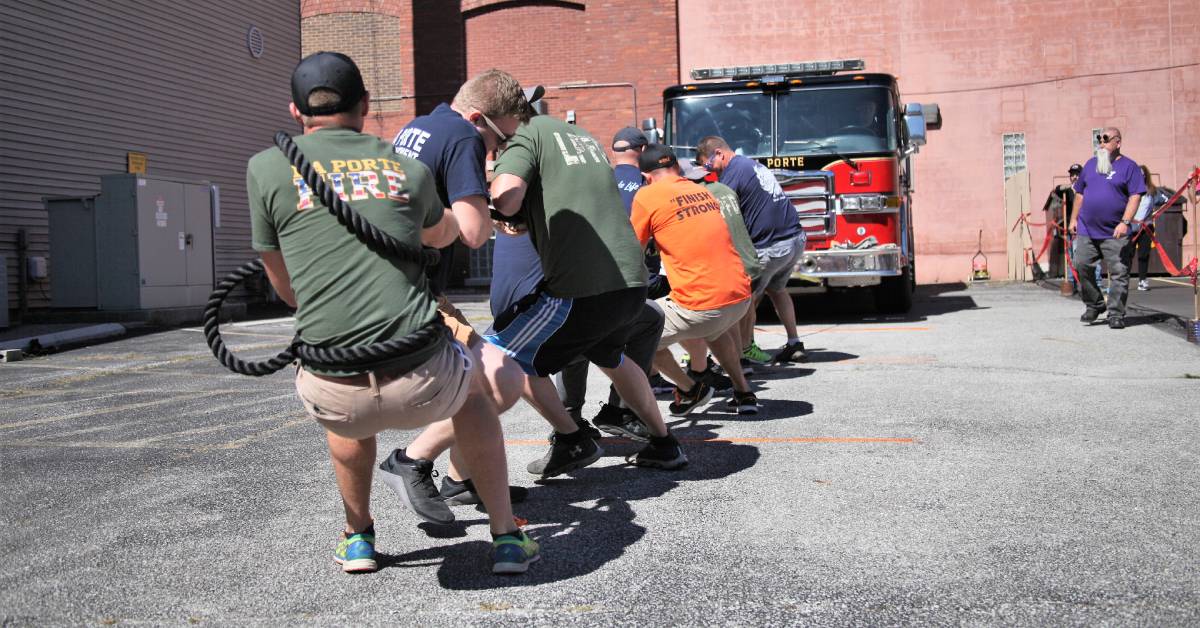 Pulling a 50,000 pound fire truck by hand isn’t easy. In fact, it takes a team of a dozen people or more to accomplish. There were volunteers aplenty at the La Porte County Family YMCA, each of them eager to grab hold of the rope and compete to see which team could pull the truck 25 feet in the shortest amount of time. Competing teams included the La Porte Fire Department, Noble Township Volunteer Fire Department and the La Porte Family YMCA’s own team, with each taking a tug on the rope.

The event also featured a judged car and motorcycle show and a raffle. Food was available from Mrs. Crawford’s Cruising Kitchen food truck.

Chuck Greenawalt works as a maintenance manager for the La Porte County Family YMCA. Greenawalt is also a retired engineer for the Grant Park, Illinois fire department. He moved to Indiana shortly after retiring, and says he loves living in La Porte.

“There is just such an outstanding community here,” Greenawalt said. “We have a great town, with a great mayor. I love working at the La Porte County Family YMCA and am happy to be here today to help them support their cause of serving this terrific community.”

Michelle Corrigan, Director of Sports and Wellness for the YMCA said this event was designed to kick off their annual fundraising events.

“We usually kick off our fundraisers in March, but due to COVID-19, we were not able to do that this year,” Corrigan said. “This year, we felt that we needed to do something different and out-of-the-box, so we brainstormed and came up with the idea to hold a car show and fire truck pull. We’re calling the event ‘Motors Motivating Movement,’ because the idea was that we would use this display of different machines to bring people in to help support the Y, for the purpose of motivating people to move and exercise!”

“I’m really excited that we were able to pull this together. The turnout was wonderful for a first-year event like this, so we’re very happy with it,” Corrigan continued.

Proceeds from the event went toward the La Porte County Family YMCA’s Scholarship Fund, which helps to offset the cost of Y membership for families in need.

Donald and Cindy Thompson brought their 2011 Ford Mustang Roush Edition to the event.

“Our son is a volunteer firefighter for Noble Township, so we came out to enter the car show and watch him and his fellow firefighters compete here today in the truck pull,” said Cindy Thompson. “With all the bad going on in the world these days, it’s important to remember that there is also a lot of good, if you just take the time to recognize it. These guys work very hard, every day to keep us safe, so it’s important to honor and respect that.”

Albert and Jill Bodine brought their 1966 Ford Mustang and won not only Best in Show, but also took home the winning prize in the raffle. Albert says he’s a swimmer and an avid YMCA supporter.

“The YMCA is fantastic! I’ve been a member almost my entire life and wouldn’t think of going any place else.”

For more information about the La Porte County Family YMCA, their available programs and membership, visit them online at https://www.lpymca.org/