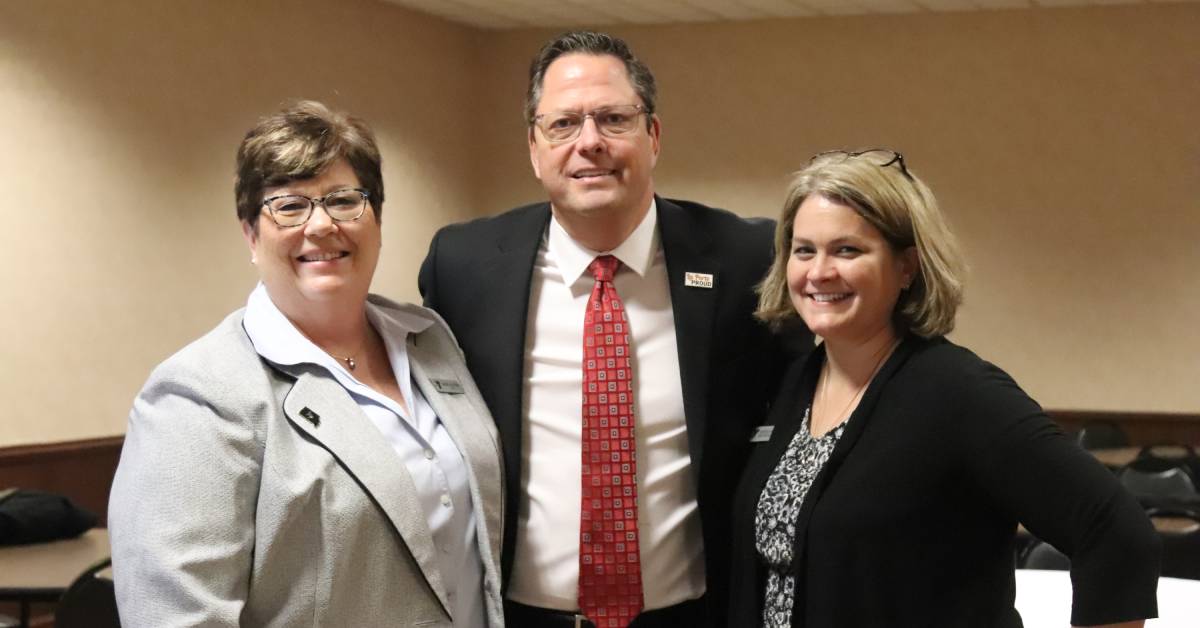 Resilience was deemed the word of the day as board members and staff of the La Porte County Family YMCA met on Thursday, February 24 for their annual meeting at the Silver Palace. As challenges from the COVID-19 pandemic subsided, the team was excited to reflect back on the successes of the past year and were eager to get started on what lies ahead.

“People want to be part of our YMCA,” said CEO Laurie Halaska.

With exercise classes both virtual and in-person, the Y has also offered the La Porte County community numerous chances to reconnect and get active after being cooped up from the pandemic for some time. This also includes the children in La Porte County, a focus that’s always been at the heart of the organization. The Y’s childcare programs and activities were booming in 2021, and the Y is working hard to expand upon those programs in 2022 to make sure children of all ages are getting the social, mental, and emotional support they need through their younger years and beyond.

The Y wouldn’t be where it is today without its staff and volunteers, both of which were honored and appreciated during the meeting. No matter their role within the organization, they are all passionate about working to help and serve in any way possible for those in La Porte County.

“I’m coming up on my seventh year of working for the Y this year,” said Director of Marketing & Events Jessica Durham. “I love the Y, my family loves the Y, and every day my kids always ask to go back to the Y.”

“I would say this year we attribute our success to just growth in general. Not only membership growth, but staff growth and really getting our staff focused on the family perspective that we have at our branches and working on developing that family atmosphere,” added Senior Program Director Kathy Workman.

Awards were also given to those who have made an outstanding impact through their volunteer work at the Y over the past year.

The City of La Porte Fire Department and the La Porte County Sheriff's Office were both given the Community Partner Award after stepping in to help when misfortune struck a highly anticipated triathlon. After volunteers donated hours of their time to set up the event, the next day the swimming portion of the course was vandalized and destroyed, leaving Durham and the staff in shock and disbelief, unsure of how to move forward. However, La Porte Mayor Tom Dermody quickly called upon the fire and police department to jump right in and save the day. Both departments donated hours of their time to make sure the course was ready to go, an act of service Durham greatly appreciated.

“It was a tremendous effort and it wouldn't have been possible without both the La Porte County Sheriff's Office and the La Porte Fire Department, and I am just eternally grateful for that,” Durham said.

Workman then presented the first Adult Volunteer Award to June Shiozaki, also known as Miss June, for her work with the kids at the Y. Shiozaki has spent numerous hours teaching swimming lessons and just being a positive role model for the kids, and also possesses a hidden talent the staff loves.

“She’s the best baker,” Workman smiled. “On Mondays and Wednesdays, Will McCorkle will typically get a call from me that says ‘Are they here yet?’ And he knows that call means ‘are the brownies here yet?’ Now, let me correct this and tell you that she doesn't just bring brownies, she brings brownies hot out of the oven, still in a pan with a pot holder, wrapped in a beautiful towel and presented to us.”

Sports Coordinator Peggy Zarantonello presented the second Adult Volunteer Award to Marquis Tyler. When Zarantonello made a Facebook post looking for volunteers, Tyler was not only the only one who offered to volunteer his time, but he went above and beyond what Zarantonello ever expected from just a simple post. As a basketball coach, he inspired numerous kids on and off the court, and even helped them make their school basketball teams when they originally never made the cut. Through his coaching, Tyler became both a role model and even a celebrity of sorts in the area.

“When he goes to the grocery store and the restaurants it's like a movie star because the kids just run up to him and are so excited. That's a great feeling to have, when you know you make that impact. It really shows how much of an impact he makes because of his patience, knowledge, and dedication,” Zarantonello said.

Zarantonello also presented the last award of the day, the Youth Volunteer Award, to the Togetherhood Project, which consists of a group of middle school aged students in the La Porte County area who have donated so much of their time to help make the Y a better place.

“When I started, I knew that the youth in our community were looking for ways to get involved. I would have never imagined that there would be a small group of kids who went out from time to time who have over 60 members and have such an impact on our lives in our community,” she said.

This impact on the community,  however, would not have been possible without the leadership and commitment of CEO Laurie Halaska, who was rewarded for her hard work through beaming smiles from all in attendance, and a heartfelt tribute from her daughter, Courtney.

Whether internal or external, the Y knows that even just a little bit of help can go a long way. The staff and volunteers work hard to offer as much help as they can to the La Porte Community, and also make sure to acknowledge when others are helping out to make a difference as well. This initiative was inspired by a childhood television favorite, Mr. Rogers, whom they credited during the luncheon.

“Because if you look for the helpers, you will know that there's hope,” Mr. Rogers said.