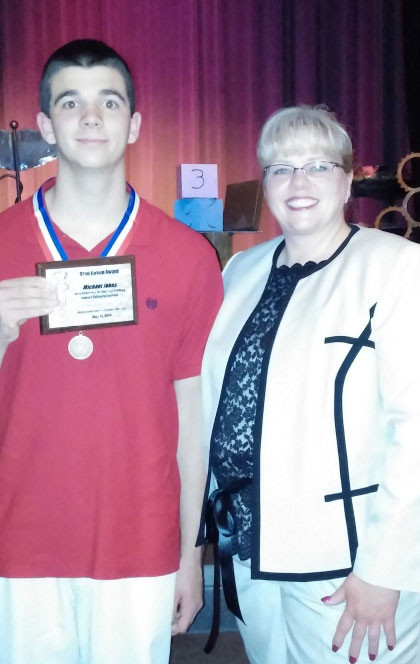 LaPorte County CTE Director Audra Peterson opened the event by thanking the many educators, parents, community leaders and business partners in attendance. She noted that this school year the CTE Program, which is based at the A. K. Smith Career Center in Michigan City, expanded its offerings to include a program in Criminal Justice and Law and a “Jobs for America’s Graduates” program. CTE also entered partnerships with the Indiana Kentucky Carpenters Union for Construction Technology, and with NIPSCO for an Energy Academy that will open next school year.

The Jim Wallace Award recognized the student most exemplifying leadership, guidance to those around them, compassion, and excellence in Culinary Science. It was awarded to Gloria Miller of Michigan City High School.
The Brad Cohen Award recognized an outstanding student who has overcome obstacles and gained success. This year’s recipient was Michael Johns of Michigan City High School.

Other awards presented on May 14 included:

Students of the Year

The 2014 CTE Honor Society inductees joined the following high-achieving students, who were previously inducted as members: