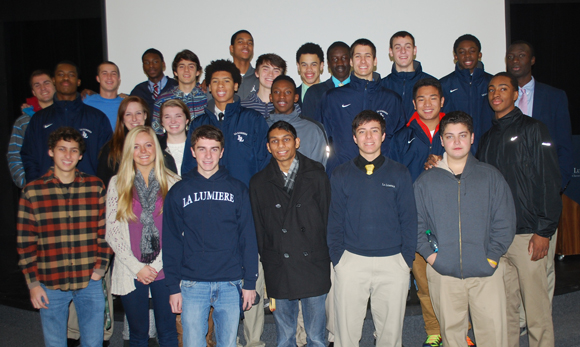 On Tuesday, November 19, while La Lumiere School was still experiencing a partial power outage as a result of the storm that blew through the Midwest on Sunday, the Laker community gathered for a varsity basketball game. During the game, discussions in the crowd focused more on the devastation in Illinois than the play on the court. Specifically, parents and students were thinking of the city of Washington, Illinois.

Over Thanksgiving break, Washington will host the 2013 Coventry Health Tournament of Champions. The top ten nationally ranked Lakers will be competing in this tournament. The La Lumiere student body, led by two students playing in the tournament, Drew Cayce ’15 and Joseph Toye ’15, demonstrated their interest in supporting victims by raising funds to aid the relief efforts. The Parents Association matched the funds raised and when the team heads to Washington early next week, they will be carrying with them a donation of over $2,000 for the Tornado Relief Fund.

Additionally, the team will be participating in the clean-up efforts in Washington. The thoughts and prayers of the entire La Lumiere community are with those affected by the storms.