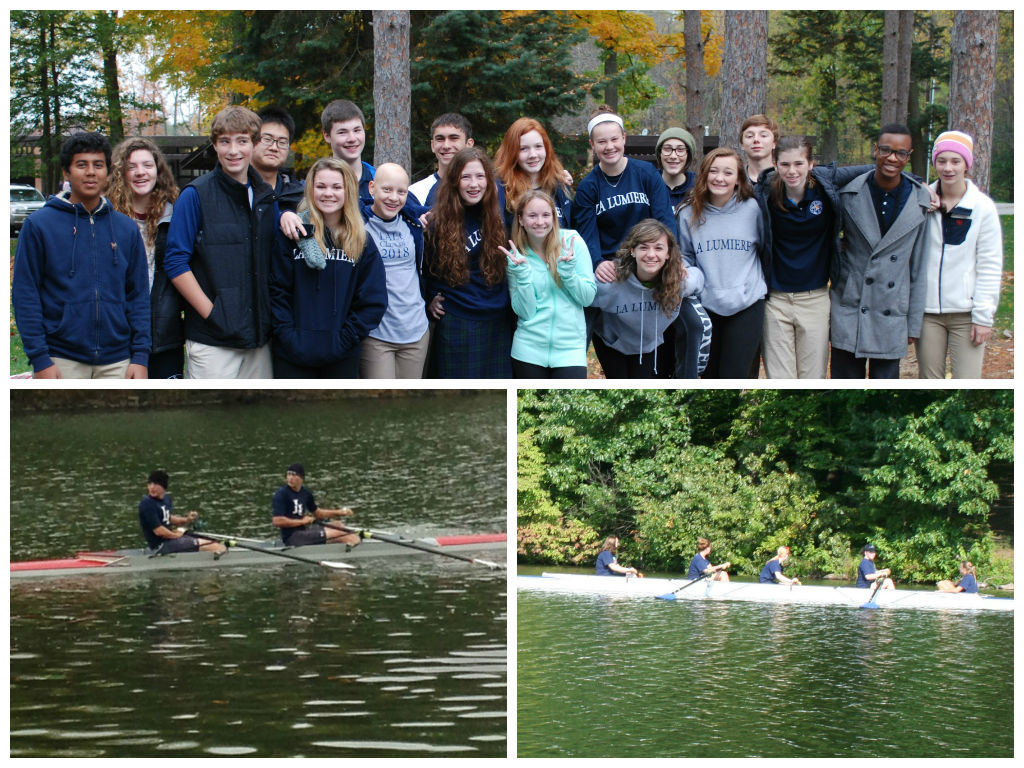 The La Lumiere Crew team, now in its third year, will participate in the famed Head of the Eagle Regatta in Indianapolis this weekend. Teams from all over the Midwest will gather to compete, coming to Indiana from as far away as Ohio, Michigan, Wisconsin, and Kentucky. Athletes from over twenty different clubs, schools, and universities will compete in boats with one, two, four, or eight rowers. Athletes will compete in three different divisions; high school, college, and master rowers.

The La Lumiere Crew team is led by Kevin Spingler, a veteran coach with over thirty years of experience. With Mr. Spingler’s guidance, the School started the program with seventeen rowers and seven shells (boats). The team has grown to 27 team members this fall with fifteen shells. Headmaster Michael Kennedy stated, “Having the right person on staff who was qualified to develop and implement a new program was key. Kevin Spingler, our crew champion, has successfully launched new programs at La Lumiere School and has coached state and national championship rowers. We know anything is possible if you have passionate people behind the program.”

Starting a Crew program was made easier by the fact La Lumiere has its own lake on campus. Additionally, the School offers the opportunity for its team members to row two seasons – in the fall and spring, and during the offseason, student-athletes continue to build strength and skills on a dozen indoor rowing machines.

The decision to start a Crew program stemmed from several objectives; to add a distinctive sport to address its growing student body, and to provide its students with an opportunity to earn additional college acceptances and scholarships. More than 60% of girls and 20% of boys who seek college scholarships to row, get them, compared to a national average for all sports of just 2%. In the short history of the program, La Lumiere School has already placed three student-athletes into competitive college programs at Wake Forest, Marietta, and Villanova.

Over the last two years, the program has had great success against tough competition. For instance, in La Lumiere’s last regatta, the Row America Regatta in St. Charles, Illinois, the Lakers earned four first-place finishes in five races and last spring the Laker crew team placed first, second, or third in 70% of their races.

Coach Spingler stated, “I have been very fortunate to have student-athletes who are committed to mastering the techniques and discipline of the sport, and who love to come out in all sorts of weather conditions to row. I have also been fortunate to have a supportive group of parents who assist in a multitude of ways to support the students and the program, as well as a supportive administration that has the vision to move forward with the crew program.”

About La Lumiere School
La Lumiere School is a premier college preparatory boarding and day school located on a spectacular 190-acre campus 25 miles west of South Bend, 8 miles from La Porte, 7 miles from New Buffalo and about an hour southeast of Chicago. Academic excellence characterizes the entire curriculum and helps to prepare its students to attend some of the best colleges in the country including Stanford, Northwestern, Rhode Island School of Design, Notre Dame, Wake Forest, Middlebury, Georgetown, Cornell University, Colgate University, University of Michigan, and the University of Chicago. For additional information, go online to lalumiere.org. La Lumiere School is accredited by the Independent Schools Association of the Central States (ISACS) and the North Central Association Commission on Accreditation and School Improvement (NCA).