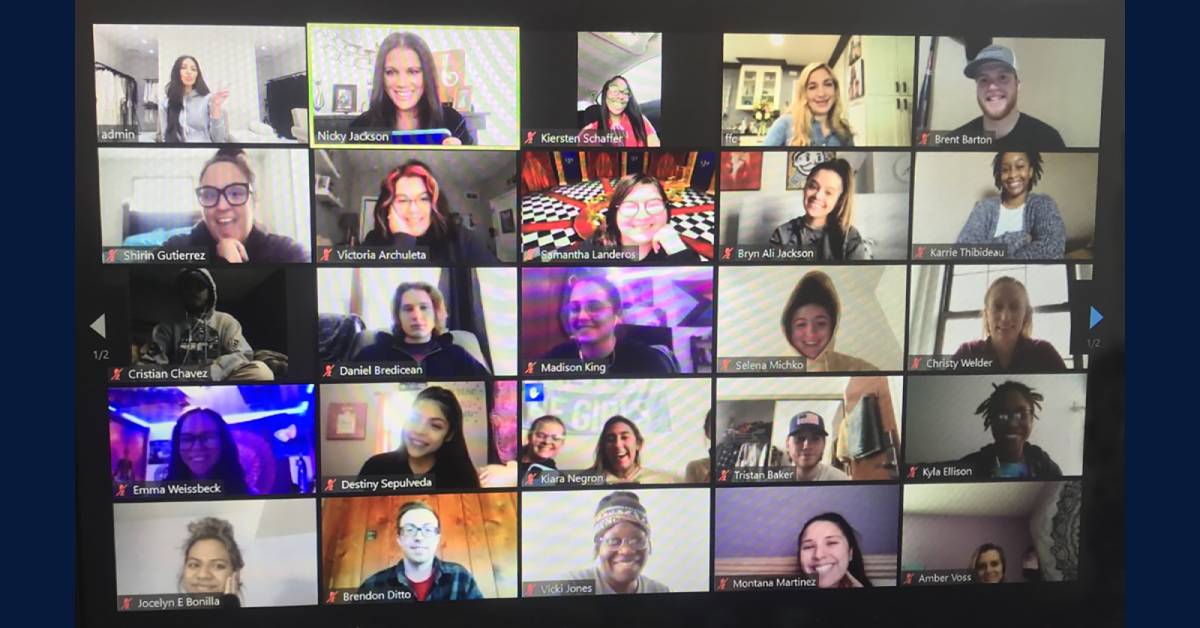 Kardashian joined Jackson and 28 students for the virtual special topics course in PNW’s criminal justice program, which will become a degree program effective fall semester 2021. Over the past three years, Kardashian has leveraged her celebrity platform to become a force in the world of criminal justice reform. She currently is studying to become a lawyer.

“She talked about how she got involved with criminal justice reform, and she told students it’s really important to post these causes to social media because someone might see it and be able to help,” Jackson said of Kardashian’s discussion with the class. “She is extremely articulate, very bright, and truly cares about justice. I was so impressed with her knowledge about the field. She is not a celebrity who is just putting her name on a cause. She is actively involved in this cause.”

Jackson, who has been teaching at PNW for more than 30 years, created the Willie T. Donald Exoneration Advisory Coalition to support those who have been, or will be, wrongfully convicted in the state of Indiana. She helped advocate successfully for legislation in Indiana to provide compensation for innocent people who were exonerated of crimes they did not commit.

Jackson previously arranged a virtual visit by music industry executive Jason Flom, founder and CEO of Lava Records, with the same class. Flom has worked with such well-known performers as Greta Van Fleet, Katy Perry, Kid Rock and Lorde. He also is an advocate for those who have been wrongly convicted.

Jackson extended the invitation to Kardashian to speak to PNW students after learning that the famous entrepreneur and influencer had visited with a virtual Georgetown University class on similar topics last year. She kept the visit a secret and surprised her students.

“During this really difficult time, my students could really use a pick-me-up,” Jackson said. “Ms. Kardashian got on the Zoom and was absolutely wonderful. The first thing she said was that she is honored and humbled to be on this call with the students and with me. She had heard about the work I have been doing.”

Jackson described her students’ reactions as having “that Macaulay Culkin look on their faces” from the original “Home Alone” movie – “they had their Zoom screens muted, with their hands on their faces and their mouths dropped open!” Some called family members into the room from other parts of their homes.

Students had the opportunity to ask Kardashian a range of questions about the justice system, being a mother, her decision to gain a law degree, and even her family’s famed TV show, “Keeping Up with the Kardashians.”

Students also have been afforded the opportunity to meet exonerees in class. They have shared how they were wrongly arrested, convicted and incarcerated. Jackson said that in March, a death row exoneree will be sharing his ordeal with the students.

“It is amazing for students to connect academic research to the real-world environment,” she noted. Many students have shared that they want to pursue a career in social justice.

“This is by far the most interesting and interactive course I have taken between the two schools I have attended. It is amazing how much my interest has grown on this topic,” student Shirin Gutierrez said in expressing her appreciation for the visit by Kardashian.

Learn more about the criminal justice program at Purdue Northwest at pnw.edu/criminal-justice.